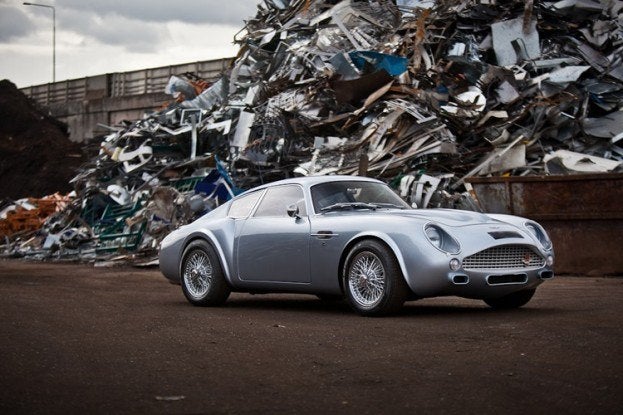 When the Aston Martin V12 Zagato arrived at last year’s Concorso d’Eleganza Villa d’Este, we (and many others) pegged it as an instant classic. The stunning coupe is the latest in a history of collaborations between Aston and Italian design house Zagato.

The two have a history that goes way back, and apparently they work really well together. Prior to the V12 Zagato, the V8 Zagato was introduced in 2002. But perhaps the ultimate Zagato classic is the DB4 Zagato, introduced at the 1960 London Motor Show. Today the car is a highly prized collector item, with one selling recently for $1.9 million. The car was produced in three batches: from 1960-1963, in 1991 and then in 2000. Also, given their rarity they are hard to find. Originally they didn’t sell as quickly as Aston and Zagato had hoped. For some, only the classics will do. Evanta Motor Company has introduced a new coachbuilt replica that is aimed at this type of buyer. Normally replicas are based on low-grade hardware underneath. You know the drill; “Ferraris” based on Pontiac Fieros and all that. But that kind of a conversion is a far cry from Evanta’s method; the company has used the Aston Martin DB7 V12 Vantage as a basis car.

The modern underpinnings mean more power, as well as the added reliability and creature comforts of a newer automobile. The 6.0-liter V-12 from the DB7 makes 420 horsepower. Evanta’s conversion is thorough; while some cars leave the interior untouched, Evanta has fitted new dashboard and door panel components. Save for a few elements (like the cheesy steering wheel), it looks remarkably true-to-form for the untrained eye. This is one of the best efforts we’ve seen of its type. That stance is just beautiful. The question now turns to cost – Evanta hasn’t released any figures. It won’t be cheap that’s for sure…