Since we discussed the North American rollout of the 2011 Chevrolet Cruze, why not throw into the mix a special edition of the Cruze that will be coming out soon in Europe? Sure, you could say that it doesn’t apply to the American market, but you could also say that seeing what makes it into the Euro special editions shows us what we could be getting over here.

Or, if you really wanted to, what you could get on your own with some parts numbers a FedEx account and a credit card.

The debut of Special Edition Cruze Irmscher was part of a roll out of three cars for the German market by General Motors. In addition to the Cruze, they also showed special edition packages for the Aveo supermini and Captiva SUV.

The Cruze was shown in North American spec form, as it was at the Los Angeles Auto Show debut, and is offered here with a sport package developed by long-time GM tuner, Irmscher. Hence the rather hard to get out of your moth official name of Special Edition Cruze Irmscher. The nuts and bolts, as it were, break down like this. The Special Edition Cruze Irmscher is offered with either a 1.8-liter gasoline mill that puts out 141HP, or you can opt for a 2.0-liter diesel with 150HP of output. Lucky Euros, it would be interesting to see what the oil burner could do. There is also a performance kit that will lower the suspension, get you 18-inch alloys that come with 225/45 R18 tires, add stainless steel scuff plates, put sport tips on the exhaust and get you some Irmscher logos. The kit goes for €1,990, which is kind of reasonable, if you think about it.

Now, undoubtedly Chevrolet will start offering some sort of factory sourced “aftermarket” goodies for the Cruze. The price and styling hits the demographic that are likely to modify their cars, and GM has said in the past that is a market segment they wish to exploit more. Also, if sales of the Cruze take off. Then you can expect aftermarket manufacturers to start throwing parts at the car. And if that happens, and Chevy hasn’t started, then at least they have Euro-sourced stuff that can easily be put into the pipeline. 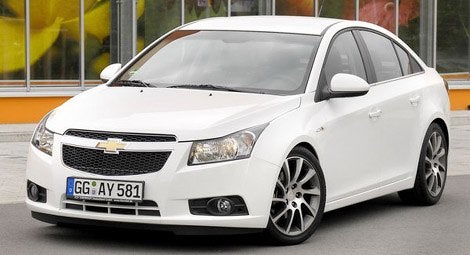