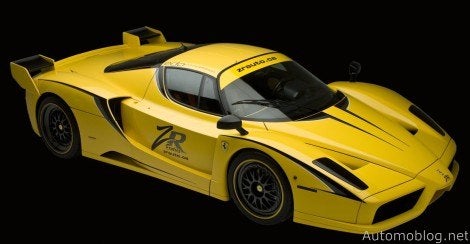 Miss out on your chance to pick up a Ferrari FXX? German tuning firm Edo Competition’s got your back. It may not be identical to the FXX, but it’s clearly what they’re going for in their latest iteration of the Enzo. Plus, I’m sure it’s cheaper than the $1.9 million FXX asking price, and you can drive it on the street!

So what Edo did was take a stock Ferrari Enzo at 660 horsepower, and bore out the cylinders from 6.0 to 6.3-liters (just like the FXX.) They added new camshafts, valve springs, connecting rods, and cylinder heads to the engine. New high-flow headers, catalytic converters, and mufflers were added on the exhaust side, and a new air intake system allows for better breathing. These changes allow the engine to produce 180 more horsepower than the stock Enzo, now up to 840 hp. The FXX “only” gets 800.

Edo also managed to cut out 220 lbs of weight from the stock Enzo, replaced the driveshaft with a lighter and stronger version, and modified the suspension with an adjustable system. This, along with 60 millisecond shift times (faster than the FXX) allow the Enzo XX Evolution to accelerate from 0 to 62 mph in an incredible 3.2 seconds, reaches 124 mph in 9 seconds, and 186 mph in 19 seconds. That’s seriously fast. The modified Enzo finally stops accelerating at 242 mph.

The most obvious changes, however, are on the body. The aerodynamics were modified, and not surprisingly, resemble the FXX a bit. The relocated exhaust tips are now just above the newly designed rear bumper. Sitting atop the rear is a three-way adjustable wing for increased downforce, which is badly needed at 242 mph. LED tail lights are also added to the rear. According to the pictures you see, they also black out the headlights and add the “edo competition” decal to the door frame, but the rest of the decals are likely custom, so don’t expect them on yours.

Could The Chip Shortage Accelerate The Adoption of EVs & Self-Driving Cars?