Ford Fusion, is that you? The 2013 Ford Fusion looks nothing like the mid-size sedan that replaced it. WIth the 2013 model, Ford didn’t opt for a careful evolution of its mid-size sedan, it opted for a radical change.

That is despite the current Fusion’s winning sales streak. For 2011, the Fusion logged a record amount of sales. That is despite being at the end of its model cycle. Judging by the 2013 model, that sales tear should only continue. The Fusion is the future look of Ford – most models in the lineup will adapt to this styling language. The Evos Concept previewed the change Ford’s design will be undertaking over the next few years. 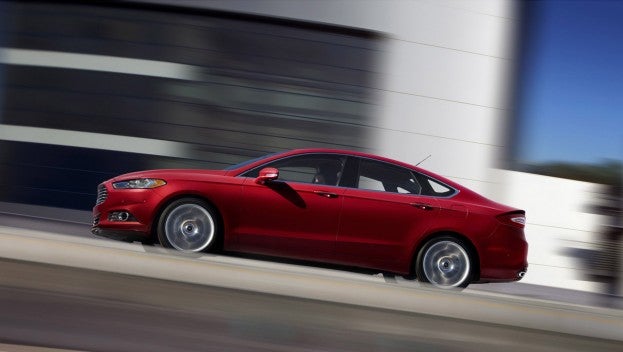 We’ll be honest – we never were big fans of the current Fusion. The grille looks like a Gilette razor, the rear comes off as cheap and nondescript and the greenhouse is a bit bated. The 2013 model has a kinetic, European-style design with sales all over the world in mind. Much more upscale than anything Ford has put out in this sector, the Fusion has hints of Aston Martin design, particularly in the front.

Instead of three chrome bars, the grille has thin slats, with a huge surface area that gives the Fusion a gaping maw front end. It’s classically good-looking, and it should be appealing to a lot more people than the current Fusion. The roofline is pretty rakish for a car in this segment too. A few years ago, (*cough* 2006 Fusion *cough*) who would have thought Ford would put out something so upscale? The Fusion appears to be one of the leading sedans in this segment, leaving traditional competitors from Toyota and Honda in the dust. And as a side note, did you notice that front A-pillar windows are making a comeback?

Underneath the hood, Ford follows the trend of ditching six-cylinder power for mid-size cars. Hyundai started it, Chevrolet followed and now Ford is doing the same thing. Pretty soon Toyota may be the only manufacturer to offer a V-6 mid-size car.

The Fusion will be available in S, SE, Titanium, Hybrid and Energi trims. S, SE, and Titanium will be available with three engines, starting off with a naturally-aspirated 2.5-liter four making 170 horsepower and 170 pound feet of torque.

The Fusion looks to continue Ford’s reputation for excellent fuel economy, with the Hybrid coming in at 47 mpg. The 1.6-liter EcoBoost should hit 26 city, 37 highway and the 2.0-liter checks in at 23/33 mpg. As for the Energi hybrid, Ford says they expect 100MPGe. The Fusion is a product developed under One Ford, meaning what you see will be sold in markets all around the world. The Fusion will go on sale here in the United States later this year, with an introduction for world markets as the Mondeo beginning next year.