It’s Saturday in Ferndale, Michigan, a quiet community just north of the mighty Motor City. It’s here where a group of self-described “techies” are meeting to share their love for science and innovation. Head over to Ann Arbor, and the same thing is happening at Washtenaw Community College. Travel across the border to Ottawa, Canada and another gathering of the same techies is taking place. Each are chapters of the flourishing Detroit Autonomous Vehicle Group (DAVG for short), a grassroots organization where members are “democratizing technology by doing.”

“We want to provide the community with a free and open place to explore new technologies, and fulfill their curiosity on the latest advancements, such as Artificial Intelligence and automated robots,” explained Alex Polonsky, DAVG Founder. “This brings us together and gives us a common goal, all while learning, meeting people, and having fun.”

Polonsky is a bilingual engineer with a passion for mobility and technological innovation. Born in Russia and raised in San Francisco, California, he worked at NASA’s Ames Research Center in Silicon Valley designing the next-generation waste recycling systems for the space program. Despite a rewarding and promising career, Polonsky packed his bags for the Motor City in 2011. Today he is an electronics engineer with the Brose Group in nearby Auburn Hills.

“I decided to pursue a dream of making a difference through transportation and moved to Detroit,” Polonsky recalled. “Since moving I have been able to combine my passion for automobiles and technology through autonomous vehicles.”

In February of 2017, while taking Udacity’s Self Driving Car Nanodegree course, Polonsky began thinking about starting his own group; one focused on self-driving cars but one in which members could apply their skills to real world applications. At the time, nothing like DAVG existed in the Detroit area. There wasn’t a place where automotive enthusiasts and professionals could work together on automation systems in a type of learning environment. The more Polonsky thought about it, the more it made sense to start something.

“Detroit didn’t have anything like our group and I thought it really should have something like this,” he said. “We have a place where people can have fun while learning about the latest complex technologies with others.”

DAVG now meets most Saturdays, during which members work on their self-driving RC cars. They hold monthly competitions where they race their creations and learn from each other’s experiences. As DAVG continues to grow, the group wants to add more layers to their Saturday meetings.

“We want to hold more monthly or bi-monthly races with more complex challenges, such as navigating a self-driving RC car through a scaled city,” Polonsky said. “We also want to work on new communication protocols, such as vehicle-to-vehicle communication and vehicle-to-infrastructure communication. From there, we would like to invent new applications for the existing technologies and apply them in new ways.”

At the first meeting, only two members showed but the message spread rather quickly. The organization today includes over 1,000 members between the Detroit, Ann Arbor, and Ottawa, Canada chapters. DAVG is now the official Detroit chapter of the DIYRobocars community, which includes over 15,000 people in more than 15 countries. Through these associations, some DAVG members have achieved remarkable success.

“The group at DAVG helped me get my startup, Passenger AI, off the ground,” explained CEO Martin Shen. “It was a great sounding board, and I even had one of the group members build the first prototype.”

“Martin joined DAVG in the beginning of 2018, before founding Passenger AI, and was immediately a great fit because of his entrepreneurial mindset,” Polonsky said. “He collaborated with a couple of the group members to help him build his idea. Two months later the first prototype was born.”

Audi Senior R&D Engineer Zikang Ma says the days he spent with DAVG are among the greatest times of his life. Ma is now with Audi’s Highly Automated Driving division, a dream job he says blossomed out of the confidence he gained through DAVG.

“It’s a great place to start if you want to switch to the future of automobiles,” Ma explained. “Don’t be afraid if you have no experience now; this is the right place to build a great career if you are eager learn and make progress for the future.”

“We are open to people from all walks of life to join us in learning, having fun, and growing the community,” Polonsky added. “We are not limited to only those who know about the technology. Instead, we want to share with anyone who is interested to learn and find out more.”

Some members come from completely different fields, and that’s okay.

“One of our group members, whose background is in political science, got hooked on the community,” Polonsky continued. “His favorite part is participating in brainstorming sessions and helping choose what technologies we work on next which might change the world.” 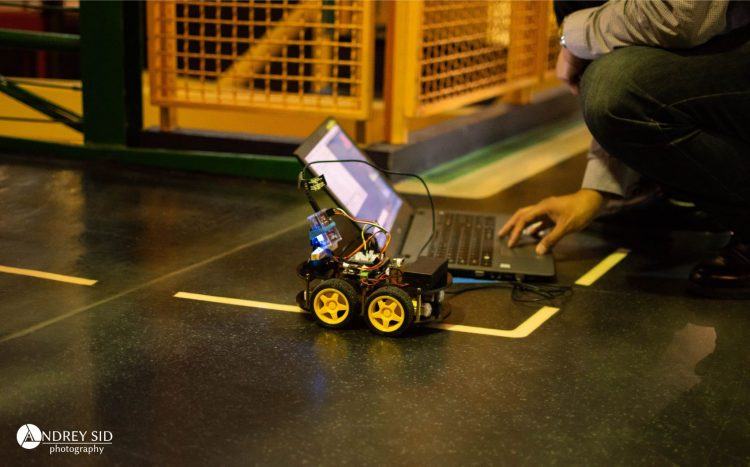 The Detroit Autonomous Vehicle Group is growing and their community is becoming more dynamic and diverse. Those with a passion for science, innovation, and technology are encouraged to contact DAVG through their official Meetup page. If you consider yourself a techie and you want to meet like-minded people, DAVG is the place for you.

“We are a group of techies who share a common vision for using technology to better the world,” Polonsky said. “Hopefully we can leave this place a little better than we found it by using technology.”