Covers Come Off the 2011 Dodge Durango After playing coy with the cameras through the last few weeks, the 2011 Dodge Durango has revealed its true nature. Coming back after a one-year hiatus the Dodge Durango, while now built on a unibody frame, reconnects with its sport utility vehicle (SUV) roots.

The Ram truck-like front end and the dual-coloured taillight housings already familiar through the teaser photos and video released mid-August, it is worth turning attention on the newly-exposed sections of the new Durango. Seen as a handsome beast, the new Dodge Durango is clearly less compromised to the crossover vehicle movement than the new Ford Explorer. The tall stature of the SUV pays credit to a generous amount of ground clearance and big bumper covers. Though still comfortable with the truck-like physique, the full view of the 2011 Dodge Durango shows off a more premium overall look than the previous generation vehicle. Smooth sheetmetal is curved into a flowing appearance accented by some tasteful contours.

With the Durango’s interior design still not entirely revealed, expect it to resemble a healthy blend of the Ram truck and its platform-mate Jeep Grand Cherokee. Dodge has said the 2011 Durango will feature a luxurious assortment of interior materials Confirming speculation, the 2011 Dodge Durango will indeed feature three rows of seats. Thanks to a longer overall length, the Durango’s interior space is being described as “extremely comfortable”. Depending on whether the Dodge Durango is needed for passenger or cargo, the 3-row seating can also be modified in 22 different configurations to suit arising situations.

Sporting two aptly-powered engine choices, a 290 horsepower 3.6 liter V-6 Pentastar powerplant can be bested by the 5.7 liter V-8 Hemi producing 360 horsepower with 390 pounds feet of torque. For 2011, Dodge joins Jeep as the only domestic brands to sell mid-sized SUV/crossovers with an eight-cylinder option. With both engines, the 2011 Dodge Durango brags about considerable towing capacity. With a maximum load pulling weight rating of 6,200 pounds with the V-6 equipped Durango, the V-8 engine naturally provides a greater towing capacity of 7,400 pounds. Rear-wheel and All-wheel drive models of the Dodge Durango will be prepared for 2011 buyers. 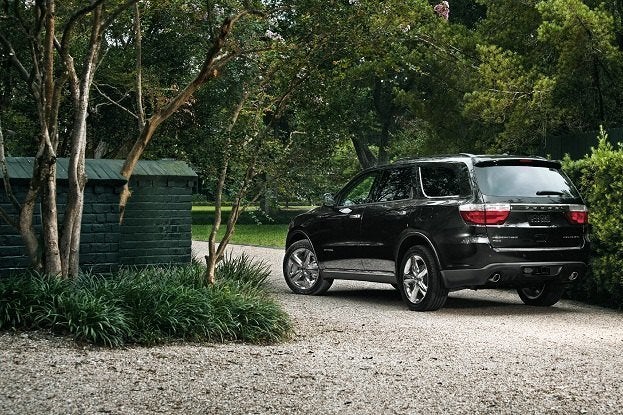 Besides being comfortable and powerful, safety has been a strong focus on the 2011 Dodge Durango. Including side-curtain air bags for all three rows of passengers, a host of accident avoidance technology is employed on the Durango. Standard Electronic Stability Control as well as Blind-spot Monitoring, Collision Warning and Adaptive Cruise Control will be some of the safety features available to help competent drivers prevent collisions.

Chrysler Group’s new SUV will be officially presented to the public at the Dodge Rock ‘n’ Roll Virginia Beach Half-Marathon presented by SunTrust on Sunday September 5th. Daylight will radiate over the surfaces of the 2011 Durango for the first time without wearing the prototype camouflage which disguised many fine details during testing. With nearly 20,000 expected athlete runners prepare to lace-up for the weekend competition, don’t count on seeing the new Durango watching from the sidelines. Serving as the official pace vehicle, the 2011 Dodge Durango will be sweating it out with the marathoners.