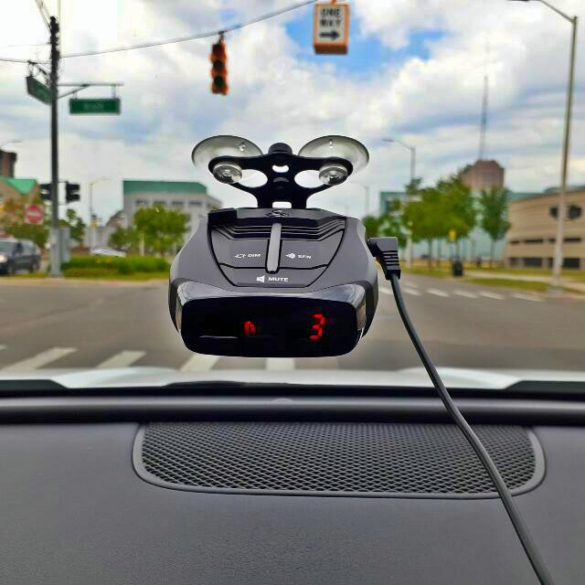 Affiliate Disclosure: Automoblog and its partners may be compensated when you purchase the products featured in this review. The RAD 380 in this review was supplied to Automoblog by Cobra Electronics. The opinions below are my own based on my personal experience with the product.

Lightweight, easy-to-install, and inexpensive: these all describe the Cobra RAD 380, a portable radar detector designed to provide longer range and fewer false alerts. I spent three weeks driving with the Cobra RAD 380 across Michigan, in two different vehicles, for this review. Whether navigating the industrial areas of Detroit or the more open expanses of I-94, the little Cobra RAD 380 always seemed to deliver in big ways.

In this article, I will run through the RAD 380 “spec sheet” and summarize my three-week drive as I go along. At the end, I will lend some insight if you are thinking about purchasing a radar detector.

Why Buy a Radar Detector?

The most obvious reason is to avoid a speeding ticket. If you consider the average cost of a speeding ticket in the United States (around $150, not counting the increased insurance premium), then yes, a radar detector makes sense. And with a retail price of $99.95, the Cobra RAD 380 is an obvious choice.

The one concern was whether the RAD 380 was going to be enough. While its lower price point (relative to other radar detectors) is attractive, it comes at the expense of some helpful features. For example, the RAD 380 does not have directional alert arrows. It cannot “mark” a red light camera or speed trap, and there are no custom submenus of any kind. The lower price point also means the RAD 380 cannot support certain connectivity features, like the Cobra iRadar App.

Instead, the RAD 380 is more straightforward in its design and functionality, which has its benefits as well. Although inexpensive, the RAD 380 is not a “cheap” radar detector. It may have only a few features, but it performs them exceptionally well.

The Cobra RAD 380 is not fancy, but it has all of the fundamentals that make it a great radar detector for everyday driving. It offers front and rear protection, city and highway modes, and both visual and audible alerts.

The Cobra RAD 380 will not intrude upon or interrupt your drive, thanks to its exceptional false alert and IVT filtering.

Cobra RAD 380 In-Depth: What It Offers

The RAD 380 comes with a 12V power cord, suction cup windshield mount, a hook-and-loop fastener for dashboard mounting, and a quick reference guide. I opted for the suction cup windshield mount over the hook-and-loop fastener for my three-week drive. The RAD 380 will perform best if you mount it in the center of your vehicle (approximately) on your front windshield. Ensure the unit is as low as possible but not obstructing its view, either to the front or rear.

Unfortunately, the RAD 380 does not come with a carrying case, so I grabbed this one on Amazon (as an Amazon associate, Automoblog earns from qualifying purchases).

The RAD 380 detects all radar and laser (LiDAR) guns. Cobra’s proprietary LaserEye technology means the RAD 380 can detect signals from both the front and rear. Although there are no directional arrows, the RAD 380 alerted me to a radar signal from behind on two separate occasions (that I could visibly see in my rearview mirror). The best thing when you receive an alert is to slow down. Most times, it’s probably ahead of you, but not always.

The Cobra RAD 380 detects X, K, and Ka radar bands by displaying the appropriate letters on the display. A giant “L” appears when a laser signal is detected. The RAD 380 is also VG-2 capable, meaning it can identify the infamous “radar detector detector” signal. The factory setting for VG-2 is off, but I turned it on for fun.

The RAD 380 will advise you of a radar’s signal strength via audible tones and a numeric signal meter on the display. The signal meter is easy to figure out, with 1 being the weakest and 5 being the strongest. By contrast, different alert tones are used for each type of signal detected (including separate tones for each laser signal). The audible alerts may take some getting used to, but it’s not rocket science. For example, if the RAD 380 beeps slowly at first, then speeds up rapidly, it’s most likely police radar. If it beeps just once, it’s still a good idea to keep your eyes peeled, but a single beep is probably nothing to worry about.

You may find the RAD 380 will issue a slow alert as you approach a hill on the interstate. Be mindful if this happens, especially if the intensity of the alert increases as you climb the hill. Most likely, the RAD 380 is telling you there is a patrol car on the other side.

The false alert and IVT filters on the Cobar RAD 380 are exceptional. Like all radar detectors, it can get a little chatty around a grocery store – but I was actually surprised at the number of times the RAD 380 stayed quiet when I was driving past places like this. When the RAD 380 did issue a false alert, it was quick to mute itself automatically. Although it can be switched off, Cobra’s Auto Mute feature is a nice perk of the RAD 380.

In my experience, industrial areas and road construction zones can trigger a radar detector into issuing a false alert. The Cobra RAD 380, however, is a bit more intuitive than your average unit. While driving through Detroit’s industrial areas, like Ford’s Dearborn Truck Plant and the Marathon Refinery on the River Rouge, the Cobra RAD 380 did not alert. Not even once.

There was one instance on my drive where I encountered extensive road construction on I-75 through Hazel Park near East 9 Mile Road. At first, the RAD 380 alerted at high volume with full intensity, but it quickly settled down after realizing I was in a road construction zone. However, if you are not driving near a shopping center or through road construction, and the RAD 380 suddenly issues an alert at full strength, be on the lookout.

The false alert and IVT filters alone are worth the $100 price tag. As we said a moment ago, the RAD 380 may have fewer features than other radar detectors, but the features it does have, it performs with impeccable accuracy. When the Cobra RAD 380 alerts you, there is a high probability that a radar or laser gun is nearby. In other words, this is one radar detector that won’t waste your time with annoying false alerts.

I tried not to overthink this and took each mode at face value. When I was driving in Detroit proper, I was in City mode. When I headed out on I-94, towards Ann Arbor, I switched it to Highway mode. In a more technical sense, City mode delays all X band audio alerts at lower signal strength levels. City mode reduces false alerts in urban areas where there are many sources for conflicting X band signals (like automatic doors, for example).

One specific example really stood out during my three-week drive with the Cobra RAD 380. It has to do with the unit’s ability to decipher between false and genuine alerts simultaneously on the same stretch of road. The gallery of photos below will help illustrate this example too.

One afternoon, I was stopped at the light by the CVS Pharmacy on East Warren Avenue (near the Michigan Science Center and Charles H. Wright Museum of African American History). As expected, the Cobra RAD 380 picked up the automatic doors of the CVS. In the gallery below, if you look just to the left in the second photo, you can spot the CVS.

When the light turned green, I proceeded down East Warren towards Wayne State University. I expected the alerts to subside after passing the CVS, but the opposite happened. As I moved closer to the intersection of East Warren and Woodward Avenue, the intensity of the audible alerts on the Ka band increased in tandem with the visual ones. What started as a 2 or a 3 quickly jumped to a 4 and 5. I arrived at the intersection to find that Wayne State campus police had stopped a vehicle in front of the university welcome center.

The distance from CVS to the Wayne State welcome center is about 0.2 miles (352 yards or 1,056 feet). At that distance and in that particular area of Detroit, it’s impossible to see that far ahead, even though the campus police vehicle had its flashers on. Despite picking up a false alert from the CVS, the Cobra RAD 380 was quick to decipher a real alert only a few moments later.

Yes. Every dime of the $99.95 retail price. With the RAD 380, what you see is what you get. It detects police radar, plain and simple. If all you need is a little peace of mind for your daily commute, there is no sense in breaking the bank. The Cobra RAD 380 will do the job. According to Cobra Electronics, the RAD 380 has a detection range of two miles on flat roads in open conditions. That said, if you do a lot of highway driving, the RAD 380 is a great choice.

However, the Cobra RAD 380 will leave you wanting if you desire a radar detector with high-end tech and connectivity features. If you don’t mind spending the money, the Escort MAX 360c will do everything but make onion rings (and I’m sure a future model will be able to). Like the RAD 380, I recently spent three weeks on the road with the MAX 360c. Personally, it’s probably more than I would spend, but it does everything imaginable that a modern radar detector can do. It’s even compatible with a dash camera.

A good middle ground is the Cobra RAD 480i, which builds off the RAD 380. It offers a few more features, including compatibility with Cobra’s iRadar app. With the iRadar app, you can share and receive real-time alerts (like red light cameras and speed traps) from an entire network of users. The RAD 480i is available through Cobra’s website for a reasonable $149.95.

Otherwise, save the money and purchase the Cobra RAD 380.

Our Verdict
More Images
8.2/10 Our Score

The Cobra RAD 380 is not fancy, but it has all of the fundamentals that make it a great radar detector for everyday driving. It offers front and rear protection, city and highway modes, and both visual and audible alerts.

The Cobra RAD 380 will not intrude upon or interrupt your drive, thanks to its exceptional false alert and IVT filtering.

How long is the warranty for the Cobra RAD 380?

Cobra Electronics provides a one-year warranty from the original date of purchase. The warranty covers defects in workmanship and materials. Cobra will repair or replace your radar detector free of charge (you do pay for shipping, however).

Does the Cobra RAD 380 detect lasers?

Yes. The correct name for the technology that most people refer to as laser is actually LiDAR, which stands for Light Detection and Ranging. LiDAR operates much like radar. Its signal spreads out like radar, though not as widely. The Cobra RAD 380 has no trouble detecting LiDAR.

One possible explanation is a dirty power outlet or cigarette lighter socket. Make sure these areas are free of dirt, dust, and corrosion. A loose power cord or connection on the unit itself could also be to blame. Make sure to double-check the connection from the primary power source. Otherwise, the RAD 380 is designed to be maintenance-free. If these simple troubleshooting techniques don’t work, we recommend getting in contact with Cobra.