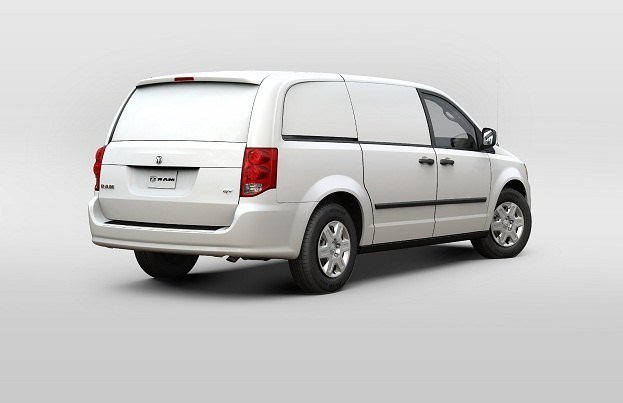 Founded in 2009 as an attempt by Chrysler to better target the truck market, the Dodge Ram and Dodge Dakota pickups moved into their own separate division. While the newly minted Ram brand continues to exist only as a showcase for Chrysler’s medium and large pickup trucks, plans to expand the product array with several vehicles in the near future. The first vehicle added to the brand line-up, the 2012 Ram Cargo Van readies the division for better grasp of the lucrative and commercial vehicle market.

Borrowing architecture from the Dodge Grand Caravan as well as the Chrysler Town & Country, the Ram Cargo Van’s noted difference is paneling over where the rear passenger windows are present. The rear tailgate doors windows are also omits the standard entry-point (Glass can be ordered as optional equipment on the Ram Cargo Van). Ideal for presenting business insignia or colours to the world, the 2012 Ram Cargo Van exterior possesses dual rear sliding doors, quad headlights and standard 16-inch steel wheels.

The first minivan to wear the Ram division’s badge and name, it is important for the name brand to exhibit far-reaching capabilities. Powered confidently by the 3.6 liter Pentastar V-6 engine, the Ram Cargo Van’s 283 horsepower momentum is carries into a 6-speed automatic transmission. Turning off 260 pounds-feet of torque, the 2012 Cargo Van has maximum towing capacity rated at 3,600 pounds. Compared to the small commercial van competition for the 2012 model year, the Ram Cargo Van towing ability is a plus over the Transit Connect (which is unrated in the category).

Most pivotal to the 2012 Ram Cargo Van is the use and flexibility of the interior. Opened for 144.4 cubic feet of storage or workroom, the rear flooring is tough enough to support 1,800 pounds of cargo thanks to the use structural aluminum. Buyers can elect for a cargo area consisting of either a flat floor or optional in-floor storage with three bins. In the front, premium cloth seating, Chrysler’s Media Center 130 CD player/MP3 stereo system and 6 airbags surround the modern looking two-set cabin. Optional productivity items including Uconnect Phone and Uconnect Web make the Ram Cargo Van a more ideal business companion. Being in an automotive segment where vehicles would commonly be sold in large orders, the commercial van market is now inundated with fresh arrivals. Successful as a workhorse on European roads, the Ford Transit Connect begin importation into North American in 2009 securing a comfortable niche. Later this year, Nissan’s awaited United States entrance into commercial van sales commences when the NV line hits the market. Besides the Ram Cargo Van, rumours swirled last year about the possible addition of a Fiat-derived cargo van being imported to the United States. The Fiat Doblo is expected to be added to the Ram vehicle line-up for 2012 as a more suited challenger to Ford’s Transit Connect work van.