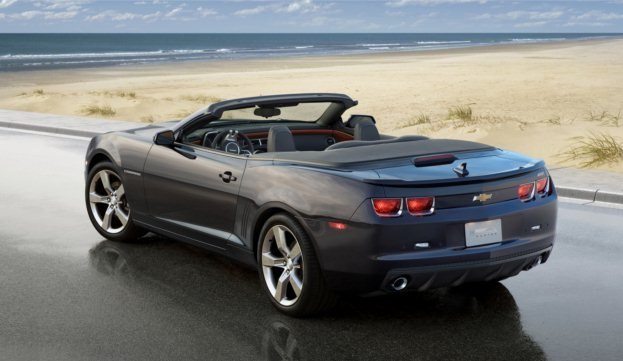 We’ve been waiting for it folks, and here it is: the Chevy Camaro Convertible. We knew it was on its way, and Chevy just announced that it will be in dealerships starting February 2011. Starting at $30,000 (including destination) for the V6, that’s around $6500 more than the base Camaro LS. But I’m thinking they won’t even offer the Convertible in the base trim, and will start at the 1LT, including standard features like fog lights, 18″ alloy wheels, and power driver’s seat. Consider someone who’s buying a convertible – they want style. Think they’ll be OK with black steel wheels?

Of course, the convertible will also be available with the legendary 6.2-liter V8, pushing out 426 hp. Top down, that’s going to sound awfully nice driving through a tunnel passage. In terms of performance, manufacturers are getting better and better at making convertibles nearly as rigid as their fixed-top counterparts, but there’s always extra weight (and often a significant amount of extra weight) added to the car due to the convertible’s motors, extra safety equipment, and bracing. Here’s the thing: the Camaro already weighs somewhere in the ballpark of 3800 lbs. Add all that extra stuff for the drop-top and you may as well be driving a semi truck.

Chevy will be showing the 2011 Camaro Convertible at the Los Angeles International Auto Show on November 17. One wealthy dude won an auction at Barrett-Jackson for the right to purchase one of the first convertibles for $205,000. Nice. More information will be released later this year.