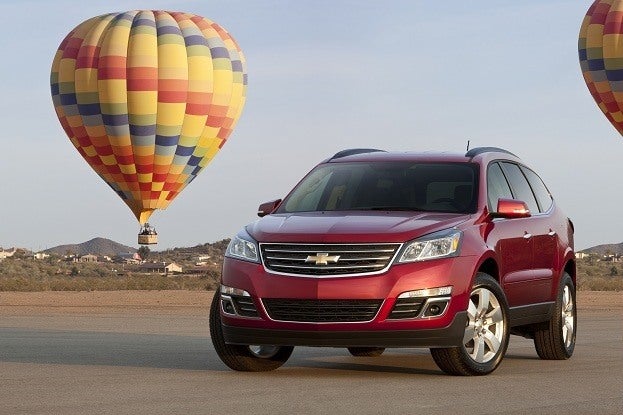 When the Chevrolet Traverse debuted in 2008, the large crossover vehicle filled a sizable gap in the Bowtie brand’s line-up. Ready to conclude what was always a ‘me-too’ presence in the minivan segment behind Chrysler, the rising price of gasoline was beginning to discourage potential buyers from the Tahoe sport utility vehicle. Steadily selling over 100,000 products in 2010 and 2011, the Chevrolet Traverse continues to win over families seeking a 7 or 8-passenger crossover vehicle. Finding few flaws in a formula that appears to be working, Chevrolet’s 2013 refresh of the Traverse crossover does not trek too far from the present path.

The 2013 Chevrolet Traverse appears decisively more debonair employing the brand’s common design DNA. Integrating the styling worn on the upcoming Chevrolet Malibu, the new front end appearance found on the 2013 Traverse employs the three-piece lower air inlets. The redesigned main grille rests higher in relationship to the vehicle’s headlamps giving a more car-like look. The 2013 Chevrolet Traverse’s decoration of chrome around the grille and fog lamps leaves the impression of a mature but accustoming vehicle. The Chevy Traverse also receives a makeover that gives the liftgate a pair of new taillight housings.

Aside from the front and rear restyling, the major change on the outer part of the 2013 Chevrolet Traverse revolves around the ride refinements. The addition of rebound springs in the front strut assemblies better regulates body roll. There is also an improvement to the shock valving that should provide occupants of the 2013 Traverse crossover with better comfort at low speeds. Continuing to be offered with front-wheel and all-wheel drivetrains for the 2013 model year, all 2013 Traverse crossover vehicles will be fitted with standard StabiliTrak, four-wheel anti-lock braking and hill start assist control for a secure, comfortable trip during short or long distances. 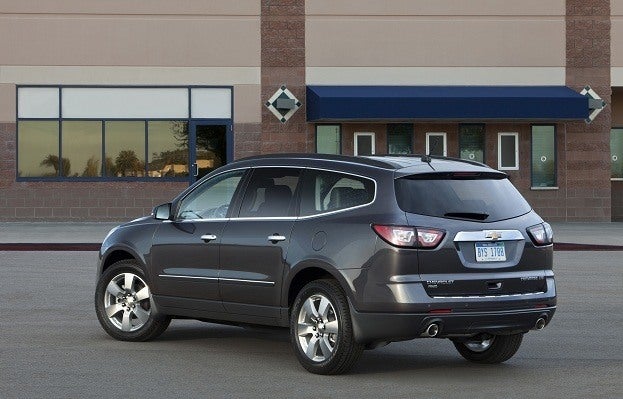 There will be no performance improvements on the refreshed 2013 Traverse. Connected to a six-speed automatic transmission, the all-aluminum 3.6 liter V-6 engine remains strong with 281 horsepower (288 horsepower when opted with a dual exhaust system). The 2013 Chevrolet Traverse’s average fuel economy will continue to hover around the 20 mile per gallon range with front-wheel or all-wheel drive choices causing gas mileage to run above or below the target range.

For 2013, the massive interior of the Chevrolet Traverse crossover vehicle receives several upgrades. The use of soft-touch materials and new front headrests now feature up and down as well as forward and back movement are new for all Traverse models. The 2013 Chevrolet Traverse’s interior has been redone for better fit and finish as well as aesthetic appeal. Buyers of the LT and LTZ models of the 2013 Traverse will have the appearance of new wood trim accents decorating some cabin surfaces. Respected as a family vehicle, the Traverse makes another step forward in 2013 assuring a safer cabin. The first-ever front center air bag will bring a new angle to crash protection. The new air bag will join front, side and head curtain crash force reduction systems. Along with several adjustments made to the interior trim, riders in the 2013 Chevrolet Traverse will have a new center stack offering better ease of control use and new technology. The availability of Chevy MyLink is one major feature that can be found within the improved center stack of the 2013 Traverse. The optional infotainment system featuring Bluetooth connectivity, Pandora and Stitcher Internet radio is based on a 6.5-inch touch screen. Like almost every General Motors vehicle, standard OnStar is included with the 2013 Chevy Traverse’s interior technology package.

Contending for the family crossover vehicle customers, the 2013 Chevrolet Traverse model will be available in LS, LT and LTZ trim levels.