Since the year 2000, Cadillac has been the face of GM’s efforts to luxury and premium class automobiles, with the Escalade leading the pack of angry wild boars I’ve dubbed “speed-seaters.” They’ll drive the f*ck out of your carpool route and seat you comfortable as sh*t!

If you haven’t visualized the Escalade in your head yet, let me paint you a less “poetic” picture: Escalades have always been one the most comfortable, social status-entailing cars in the market and among the fastest SUV’s.

You see, what Cadillac has done over the years is raise a shy baby. From the first generation model in 1999 to the current and futuristic 2015 ESV, there has always been at least a 5.7-liter V8 engine that’s able to produce at least 300hp.

But they mask it with such a premium exterior design that the speed capabilities become a mystery. It’s over-looked and not noticed anymore but it doesn’t mean it’s not there.

The result is having the air of mystery looming around every Escalade model redesign. Take a look down the line and you get this feeling that this car has always craved recognition beyond its known “PG 13” status.

The 2000 Cadillac Escalade was a big and brawny four-door SUV that featured a spacious interior with a forgotten power under the hood. It was offered in one trim with a 255 horsepower 5.7-liter gas-powered V8 that could generate 330 lbs-ft of torque mated to a 4-speed electronically-controlled automatic transmission.

A carry-over from the millennium baby, the second-gen Escalade was another full-sized luxury SUV that featured an amazing 6.0-liter Northstar V8 engine that generated 345 horsepower linked to a four-speed automatic transmission. You could choose from either two or four-wheel-drive configuration.

It was also the introduction of its chrome make-up which  made it the well-known celeb-mobile it is today. This model was the ultimate speed-seater above all American SUV’s and in my opinion, the best one.

Completely redesigned for 2007, the Escalade got lower with a fatter stance for advanced ride and handling. It got more internally equipped with a new navigation system and better on-board entertainment packages for passengers which made the experience more luxurious over how sporty it actually was.

The only available engine was the 6.0 Liter V8 that produces 403HP linked to a six-speed manual transmission with manual shifting mode.

This car is starting to sound less pretentious and more authentic in terms of its rugged capabilities. If it’s not then remember this, SUV’s rarely produced more than 250hp and boasted V6 engines. Cadillac beat this on its first model and continued to hide it’s perfect elixir of luxury and speed…until now. 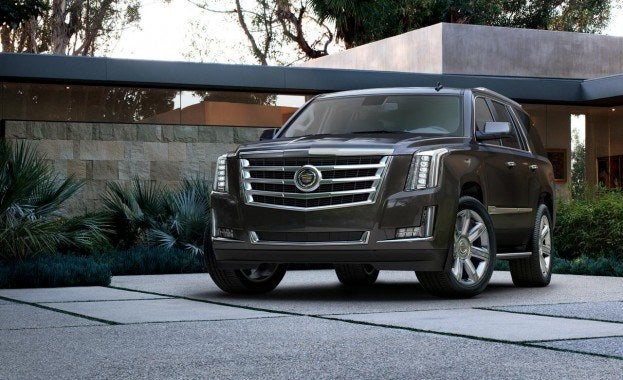 The fourth-generation model of the Cadillac’s massive sport utility vehicle, the 2015 Escalade is sculpted as a high-class product. A chassis consisting of over 75 percent high strength steel construction provides the platform for the wider 2015 Cadillac Escalade.

The 2015 Cadillac Escalade luxury and premium model is equipped with the added safety of side blind zone alert, rear cross alert and lane change alert. Inside the eight-passenger interior, the Cadillac CUE infotainment system is included standard on every 2015 Escalade model operating from an eight-inch touchscreen.

This is the perfect model to end the Escalade’s enigma and unmask the rawness and orgasmic power it’s always had.