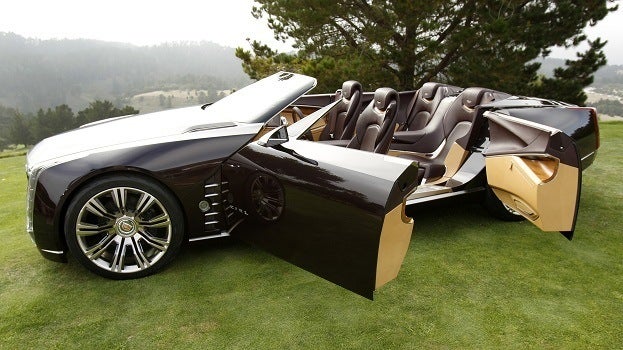 Featuring an exciting product line-up, the flow of Cadillac’s creative juices (taking on the texture and taste of fine Nappa valley wine in the case of a luxury company) is fuelling the production of three new vehicles. Rubberstamping the full-size XTS and compact ATS for production early this month, a third assembly line product was unveiled this week. Based on the insatiable Cadillac Converj concept car, the General Motors luxury carmaker declared a planned entrance into the plug-in hybrid vehicle market with the ELR sport coupe. As past Cadillac concept cars are being transformed into extravagant production reality, the General Motors luxury brand’s latest design study presented at the 2011 Pebble Beach Concour d’Elegance gains some extra clout.

A four-seat convertible show car, the Cadillac Ciel concept car premieres at the ultra-exclusive California golf and country club as a profuse expression of luxury embracing the Golden State. Covered with a charmingly regal Cabernet paint finish, the Ciel is a grand touring vehicle concept merging comfort with a high-class driving experience.

Named the Ciel (the French translation to the word Sky), the pronunciation of the Cadillac concept is expelled as ‘C-L’. An amusing name for the fact the General Motors luxury brand reuses a name once worn by a roadster from the auto corporation’s former Saturn division, premium car rival Mercedes-Benz could probably be heard voicing some other colourful words realizing Cadillac’s choice for concept car naming. The Cadillac Ciel concept is accomplished with a long, elegantly sculpted appearance playing on classic and modern exterior styling traits. Featuring horizontally directed LED headlights and taillights, the overall appearance of the Cadillac Ciel beckons remembrance of the mid-1960s Eldorado convertibles. On the other hand, a big front Cadillac grille and the smooth side texture of the Ciel radiates design characteristics shown on the XTS concept sedan. The super large 22-inch aluminum wheels and carbon-ceramic brake rotors insures a strong expression of 21st century technology.

Realized as an all-wheel drive hybrid vehicle with lithium-ion battery storage, the main power for the Cadillac Ciel comes from a potent twin-turbocharged V-6 powerplant. Projected to produce 425 horsepower and 430 pounds-feet of torque, the Ciel concept’s 3.6 liter, direct-injected six-cylinder gasoline engine could be close to production. Speculation regarding the upcoming XTS has implicated a twin-turbo V-6 powerplant as an equipment option. 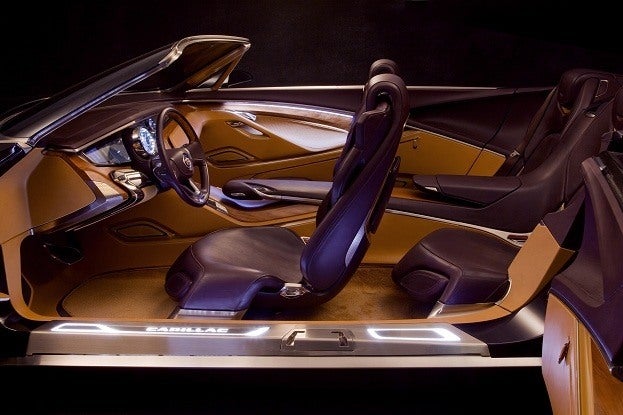 Residing on a wheelbase measuring 125 inches, the Ciel interior is presented as spacious luxury. With rear doors swinging backwards to open, the Cadillac Ciel cabin opens up for a grand entrance thanks also to the absence of a B-pillar frame. Unmistakable luxury is echoed throughout the four-passenger accommodations with Italian Olive wood, nickel plating and aluminum decorating the Ciel’s interior quarters. Unique design touches inspired by California are carefully inserted into the Cadillac Ciel concept’s cabin including pullout blankets for passengers and compartments designed for holding weather-worshiping items such as sunglasses or sunscreen. Cordless inductive charging and ambient lighting brings the technological culture of California to the passengers of the Cadillac Ciel.

More than a just a delightfully pompous occasions for the past day history to be celebrated in an outdoor country club, the Pebble Beach Concour d’Elegance has rapidly morphed into an event demonstrating relevance for modern motoring luxury. Presented in the California sun, the Cadillac Ciel may not have the momentum to reach production car attitude. Cadillac’s latest experiences with convertibles have resulted in the less than successful Allante and the forgettable XLR. The Ciel’s concept production could truly depend on a wish upon a star.