Andy House, owner of Performance Auto Sales (specializing in repaired exotics, ironically) in Lufkin, Texas, was driving on Interstate 45 early last week when he crashed his 2006 Bugatti Veyron into a nearby lake.

According to Mr. House, a pelican distracted him, making him drop his cell phone and lose control of the car.

The man, who refused to give his name, was looking at real estate in Galveston.
About 3 p.m. a low-flying pelican distracted him as he traveled north on Interstate 45 just south of the hurricane levee near Omega Bay.
The man jerked the wheel, dropped his cell phone, and the car’s front tire left the frontage road and entered a muddy patch, which foiled his attempt to maneuver away from the lagoon.

Luckily, two dudes listening to Sublime caught it all on video, thinking they were watching a Lamborghini crash into the water. Check out the video: 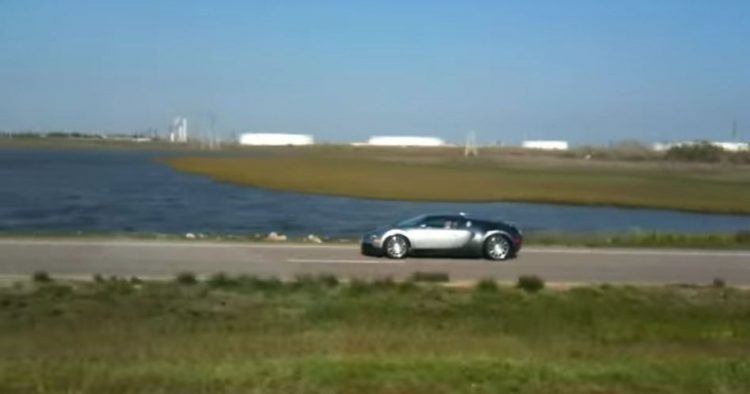 The creator of the video said:

I recorded this 5 miles away from my house in Galveston County, Texas. We have a very rich neighborhood right next to the beach. I was stunned! Third or fourth Veyron Crashed 🙁 A distracted owner of a Bugatti Veyron, one of the world’s fastest production cars, accidentally drove Wednesday, Nov. 11, 2009, into a lake in Galveston, Texas. The driver was uninjured, but the car, which can sell for around $2 million, was partially submerged in three feet of water.

Some are reporting that the crash was a hoax for insurance fraud. Did you see a pelican in the video? I’m not here to make judgment, but I wouldn’t count out the possibility.

According to reports, Mr. House bought the Bugatti for $1.25 million from a Jonesboro, Ark. dealer last month and was on his way to Galveston, TX to look at real estate. The Bugatti Veyron was one of 15 made for the United States.

We have more footage of the Bugatti below, this one is of the car being towed out of the lake: