A Breathalyzer for Your Smartphone? Meet the $20 Breathometer In America, we’re all too familiar with the problem of drunk driving. We all know someone who’s been in a booze-related car accident, and nothing seems to reduce the amount of injuries and deaths caused by people’s poor judgement. When I’m out, I hear “I’m fine to drive, I’ve only had a few drinks” nearly every night.

A new product just announced intends to allow you to challenge the guy who insists he’s alright to get behind the wheel, and it’s small enough to fit on a keychain.

Meet the Breathometer – a tiny $20 box that works with your smartphone, and hopefully encourages people to sit around for a bit longer and have a couple glasses of water before taking off home. Thing is, if you see the actual number saying your BAC is over 0.08, you might be more likely to sit back and wait a while. Again, wishful thinking maybe, but it’s a helluva lot better than the alternative. 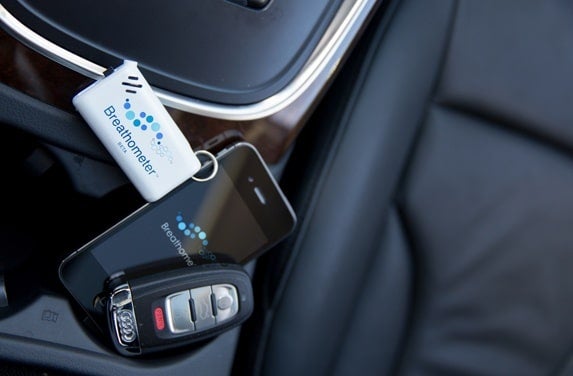 Either way I think it would be fun to have, although I’m willing to put some money on the table to bet that drunken frat boys will use this and other breathalyzers as more of a drinking game than a safety measure. “Yeah bro, I hit 0.20! Who can beat that!?”

The Breathometer is a crowd-funded product through the Indiegogo crowdsourcing platform and isn’t available yet, but you can preorder one for as little as $20, or if you’re a big fan of the project, you can spend up to $500 and get a breathometer, t-shirt, and two tickets to their launch party in San Francisco.

On the Breathometer Indiegogo page the project is a go-ahead if they raised more than $25,000, and at the time of this writing, they already have almost $110,000 raised. If they hit $150,000, they’ll make four more colors for the device you can choose from, and at the $200,000 mark, they’ll add functionality to the app that will help stop drunk texting when over the legal limit.

Head over to the Breathometer Indiegogo page to check out more info, preorder a device, or help support the project.

Do you think making breathalyzers more accessible to the public will help stop drunk driving?