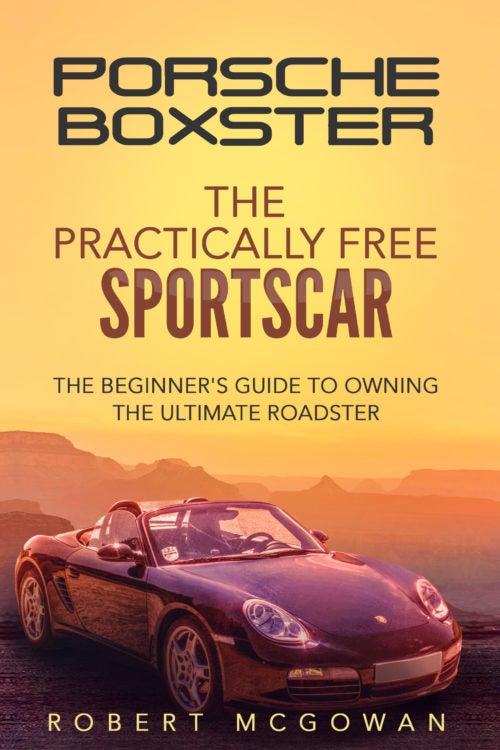 There are a few sports cars that are so plentiful and so ubiquitous that finding a good one, buying it, and enjoying it is as easy as falling off of a log. Mazda Miatas and Toyota MR2s spring to mind. They made so many of them, and they’re so reliable that finding a good one is pretty easy. There are scores of clubs, and the aftermarket gives a new owner plenty of options for customization. If Robert McGowan’s latest book is to be believed, you can add the Porsche Boxster to that list.

And why wouldn’t I believe him? He’s the fine fellow that wrote Porsche 911: The Practically Free Supercar, a fabulous book about finding, owning, and living with Porsche’s fantastic 911.

This time he’s turned his attention to Porsche’s mid-engined sports car in Porsche Boxster: The Practically Free Sportscar: The Beginner’s Guide to Owning the Ultimate Roadster. It’s an interesting proposition since, like MR2s and Miatas, there are tons of Boxsters out there. While reading McGowan’s book, I took an afternoon and searched most major metropolitan areas; I found dozens of Boxsters available and for not that much money.

Porsche Boxster: The Practically Free Sportscar is a well-written and thoroughly enjoyable book on just this subject. It’s not only a quick “how-to” book (although it’s relatively brief at about 270 pages), but rather a handy tome about how the Boxster came to be with an excellent history of Porsche mid-engine specials. And then it gets into the nitty-gritty of owning one!

But don’t worry. That stuff can happen to literally any car on the road, and McGowan is just being thorough here, which all Porsche collectors can appreciate. Porsche Boxster: The Practically Free Sportscar gives you an idea of what to expect when you finally get your dream Boxster home. McGowan has the kind of firsthand knowledge that made his first book such a helpful resource to the Porsche faithful. And his latest is no different.

McGowan also does a good job reminding us how the Boxster is a sports car to be taken Seriously (with a capital “S”). For some, it’s far too easy to dismiss the Boxster as not a real Porsche. This, to use my dad’s phrase, is horse manure.

Boxsters are serious business. Even the base models are durn quick, and they all handle fantastically (better than the rear-engined 911s (Cough! Cough!)). And, the cherry on top is that they’re fairly inexpensive. I found 10 of them in the $10,000 to $20,000 range not far from me. That’s less than a decent minivan. That’s waaaay less than a 911 (and since when did 911 prices get so stupid?) and about the same as pre-owned Corvettes in good shape.

As usual, McGowan is hard to argue with. Shoot, by the end of the book, I was poking around online, muttering things like “That dark blue one is rather nice …” which is always a dangerous sign.

So like I said, don’t worry about some of the in-depth things addressed in the book (McGowan does a good job easing your mind). Just read it before you go searching for a Boxster, and you will have an idea of what to expect. Shoot, just read the book, even if you aren’t in the market for a Boxster! It’s a fun read, and there’s tons of useful info here.