BMW i8 – the Future of Sports Cars

This, folks, is the future of the sports car.

BMW showed us the i8 Concept quite some time ago, and we expected it to be a proof of concept. But damn if they didn’t just unveil the production model at the 2013 Frankfurt Motor Show. We weren’t expecting that.

Not only that, but the production car looks surprisingly close to the concept. That is….damn sexy.

Why is this the future of sports cars?

This means they have to find ways to make sports cars fun and exciting while also keeping fuel economy as high as possible.

This means that in the future, we’ll be seeing fewer 6+ liter V8s making 500-700 horsepower and more small petrol or diesel engines mated to hybrid systems. They’ll still produce decent power – the i8 gets an impressive 362 hp and 420 pound-feet of torque from a turbo’d 1.5-liter 3-cylinder engine and hybrid system – but the big change is going to be adding lightness. 362 hp from a 3,285 lb car is pretty damn good. The power-to-weight ratio is becoming more and more important nowadays, and the BMW i8 is the beginning of the revolution for modern sports cars.

We’ve gone very, very far putting as much power as possible into our road cars – I mean, when you can buy a car from the dealer that gets damn near 1,000 hp (assuming you’re millionaire,) you’re doing alright.

But now it’s about time to start working on the other side of the power-to-weight ratio.

Look at the LaFerrari for example: 923 hp from a 6.3-liter V12 and their hybrid KERS system, good for 220 mph and a 0-62 time of under three seconds. And it weights 2,767 lbs – less than a Toyota Corolla. Of course, it costs well over $1 million, which is why I’m not using it as this example; it’s unobtainable. Ditto with the Mclaren P1 and Porsche 918 Spyder.

The BMW i8 is obtainable. Expensive, sure. It’s made from carbon fiber, has all sorts of wild tech, and…well…just look at it. 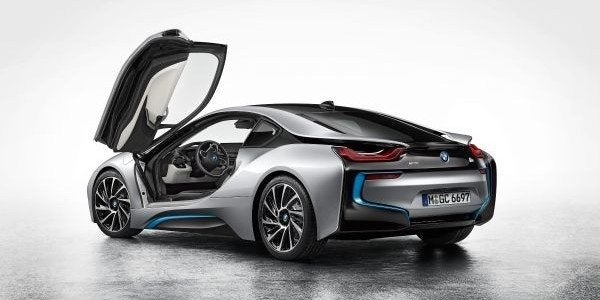 Table of Contents show
What’s it gonna cost me?
What are the specs then?
Performance
Fuel Economy & Range
But what about…
BMW i8 Photos

What’s it gonna cost me?

But frankly, you could consider this a bargain. You’re getting a next-gen sports car from BMW, that’s literally on the cutting edge of consumer-based lightweight high-tech sports cars. This is some futuristic stuff right here.

You could get a spec’d-out Audi R8 V8, an Aston Martin V8 Vantage, or Porsche 911, for a few examples. All great cars, mind you, but the i8 is just as fast (specs below), and let’s be honest here – those cars are a dime a dozen in big cities. What are the specs then?

This is a sports car, so let’s get to performance first.

Zero to 62 mph comes up in 4.4 seconds, up to an electronically limited top speed of 155 mph. Pretty much the same or even slightly better than the competitors listed above.

The teeny little 1.5-liter three-cylinder gas engine puts 231 hp to the rear wheels, as it should, via a 6-speed automatic transmission, while the electric motors push out an extra 131 hp to the front wheels by way of a 2-speed gearbox.

Obviously, lots of ones and zeros will be thrown around inside the car to keep all that under control.

And being AWD, this thing’s bound to be a little devil on the track.

Under the official test cycle, the i8 managed to get 94 mpg, which is, needless to say, damn impressive.

That’s due to the car being able to manage 22 miles on full electric mode – so no fill-ups for short commutes if you’re able to keep your right foot under control (yeah, right.)

It can travel at up to 75 mph without using any gas, and the total range, like just about any car, is 310 miles.

And by plugging it in, you’ll get 80% charge in about 2 hours. So to work and back, this thing’s a freaking steal. 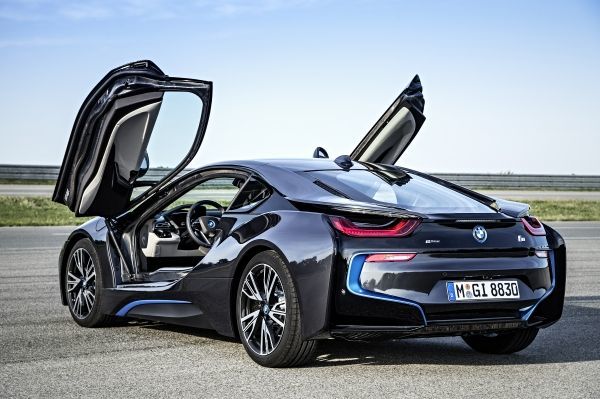 But we’re missing the most important thing about sports cars.

Sure, the i8 makes loads of sense on paper, it gets plenty of power, craploads of fuel efficiency, and it looks just downright awesome.

But the growl, the sound, the feel, the passion. The startup roar of a properly-tuned V8, blipping the throttle. The sound and feel of a perfectly-timed downshift. That’s the best stuff about $100k+ sports cars, and that’s what the i8 lacks. Pumping artificial sounds into the cockpit doesn’t cut it. You can’t roll the windows down and blast through a tunnel salivating from the reverberation.

I care far too much about that stuff, and I know I’m not alone.

What are your thoughts on the i8?

2022 Hyundai Elantra N: Roaring to the Spotlight With a Bevy of Ingenious Tech