So it turns out that BMW has been building roadsters for 75 years, and has decided to celebrate (who wouldn’t?) and has turned their PR machine loose on the subject. 75 years s a long time to be at anything, especially making cars of a given type, and it’s worth marking the occasion. Funny thing is, when you say ‘BMW’, roadster isn’t the first thing I think of.

BMW is a good car company all in all. Like all car companies, they’ve made their mistakes and produced models that leave you shaking your head. But overall, it’s hard to fault the products they’ve turned out.

The interesting thing when it comes to BMW roadsters is that they’ve been OK, sure, but not really on the top of anyone’s list when it comes to buying an out and out sportscar. BMW made a name for itself, and continues to do so, by making sedans that handle like sportscars, not by manufacturing sportscars outright. They pretty much single-handedly invented the sport sedan. It’s as if any roadsters that BMW has made have almost been a fashion afterthought, rather than a raison d’etre unto themselves.

Roadsters and sportscars require a certain amount of litheness that BMWs, and most German cars, are not really known for. You want a sportscar, you go to England or Italy … or in this day and age, Japan since Miatas are so finally honed (and cheap and reliable). If what you’re looking for is a practical sedan that’s built like a tank but still goes like blazes, then Germany is your automotive destination.

So getting a BMW roadster is, to a certain extent, a fashion decision, more than a performance one.

Your typical BMW roadster buyer/owner/driver is either a lot like this guy: The guy is Albrecht Count Goertz standing jauntily next to his BMW 507. Nice suit, huh? Sure, the 507 is a nice car. Big engine. Tons of power. More style than you’d expect from a German car. Real expensive too.

The woman with the 507? Why that’s Miss BMW Connection, apparently a beauty pageant winner of some sort, and not the kind of gal that would actually BUY a BMW 507, no. No, she’s the kind of woman who would have a 507 GIVEN to her, and that’s a totally different thing.

The 507 pretty much personifies what a BMW roadster is: Somewhat stylish, fast rather than a handler, expensive and not seen very often. Much like the modern reinterpretation of the 507 the BMW Z8. I remember going to see a then new Z8 at the BMW dealership when I was living on Oahu. My friend Bob and I had to swing by the Mini dealership for some reason or another, and we noticed it sitting in the show room. As we walked up to it, one of the sales-guys noticed us, and for some reason took us for easy marks with money to spend. He got to us about 2 seconds after I noticed the bottom line price on the window sticker.

“Actually, no,” I replied. “There’s a lot of mistakes here.”

He didn’t verbally respond, just gave me an astonished look like that response was the LAST thing anyone would say.

“What’s with this character line here?” I said, gesturing towards the rear fender, more to Bob than to the salesman. “And this chrome vent? Man, that looks even more tacked on when you get up close.”

“An Italian would NEVER style a car like that. Especially one that you’re asking 80-thousand dollars for,” I said.

“Yeah, it does seem to have a lot bits that seem like afterthoughts,” said Bob.

The salesman walked off, realizing we were not going to buy the car any time soon.

But hey, it’s not that bad of a car, overall. Now the BMW Z3, that thing was a nightmare from a lot of angles. A roadster body dropped onto a 3 series platform, and aimed to take on the then new Mazda Miata, the Z3 hit the streets with a weak 4 banger under the hood and about 900 more pounds then the Miata and went for about nine grand more, dollar-wise. The SCCA had them in the same AutoX class as the Miata. Racing against a Z3 was like beating up on a retarded kid; so easy you were embarrassed at even contemplating the prospect.

BMW sold a lot of Z3s though. To flight attendants and receptionists. They also got it product-placed in a Bond movie, but (and tell me this isn’t indicative of the whole deal) one of those lesser Bond movies with some wimpy British guy who would shake his hand after slugging some henchman in the jaw. 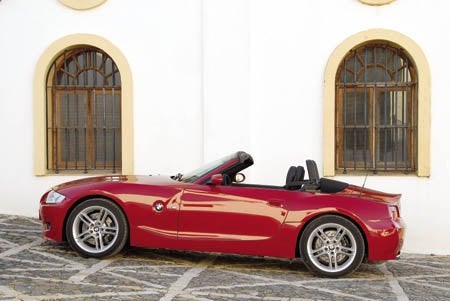 BMW got it more right with the follow-on to the Z3, the Z4. It had more power, a tighter chassis, and cost a LOT more money, so that had a natural tendency to filter out the flight attendant/receptionist crowd. They also made the mistake of having Chris Bangle “style” the damn thing. There was lots of longwinded press releases about “flame surfacing” and “tension of the body panels”, but from a distance the car looked as if it had been sideswiped, and the closer you got, the worse it looked. You realized that no, somebody had not “just hit that new BMW.” No, it was MEANT to look that way, and that made it even worse.

Sure, sure, the Z4 was much quicker and handled much better, but looking like that, who’d care? For that amount of money, there were a bunch of other convertibles out there that would run with, if not outright beat, a Z4, and you wouldn’t have to be constantly explaining the cars looks to people.

Roadsters from BMW are still puzzling. BMW is a company that makes some of the best engines out there, and they sure understand stuff like chassis dynamics and handling. You can put any car platform on a diet, and if motivated, BMW could do that too … but why BMW (or any other German car maker) just can seem to get what a roadster is and make one is kind of beyond me.