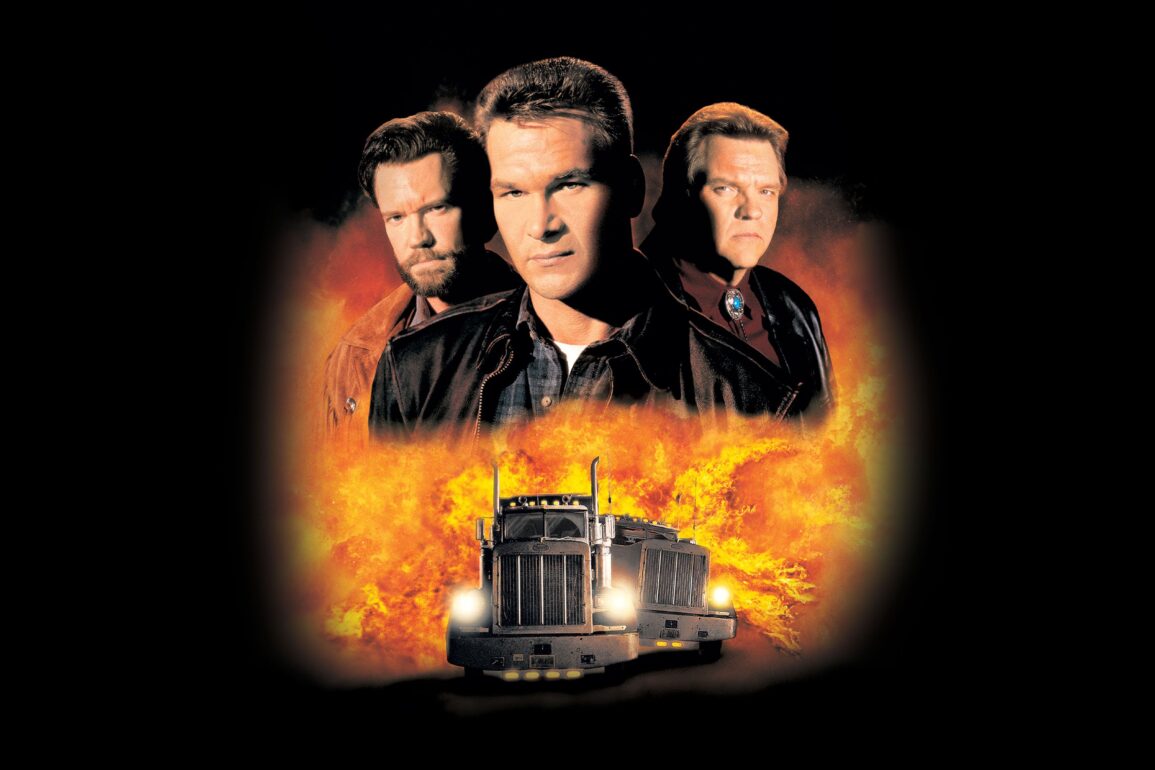 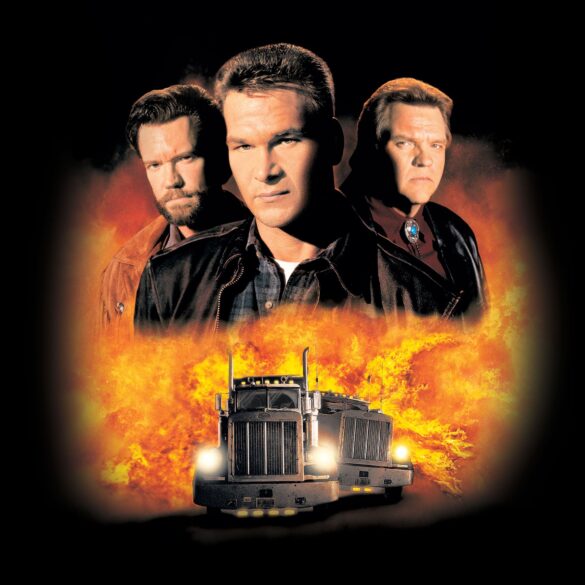 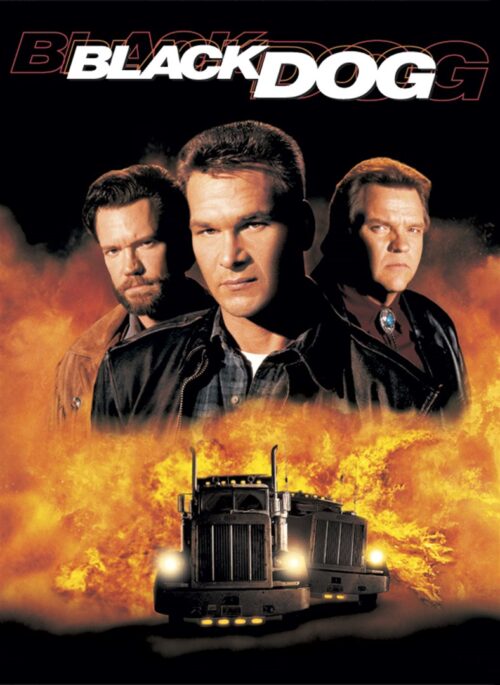 When it hit theatres in 1998, critics didn’t feel Black Dog had any bite. Marjorie Baumgarten of The Austin Chronicle indicated there had not been a decent truck-driving movie since the glory days of CB radios. And if we expected Black Dog to somehow change that, we would be sorely mistaken. Baumgarten wasn’t alone either. Critics from the Boston Globe, Las Vegas Review-Journal, and the Detroit News all dumped hard on Black Dog.

However, 25 years later, this 18-wheeled action flick holds a particular awesomeness and a certain nostalgia. It popped up recently while I was scrolling through Amazon Prime, and I couldn’t resist watching it again. The last time I saw it was on VHS.

The late Patrick Swayze plays Jack Crews, a former truck driver now trying to put his life back together after serving time for vehicular manslaughter. Unable to drive after permanently losing his license, Crews works as a mechanic in a New Jersey shop owned by Frank Cutler (Graham Beckel). Cutler calls Crews into his office one afternoon and strong-arms him into hauling an “off-the-books” load up from Atlanta for $10,000 cash. The cargo is a trove of illegal firearms, which Crews won’t learn about until later.

Back home that night with his wife Melanie (Brenda Strong) and daughter Tracy (Erin Broderick), Crews learns their house is about to be foreclosed on by the bank. He tells Melanie of the job offer from Cutler, which causes tension between the two and hints at why Jack served time for vehicular manslaughter. Against Melanie’s wishes, Jack accepts the job offer and flies to Atlanta to pick up the load in question.

The Motley Crew of Black Dog

At a trucking yard in Atlanta, Red (Meat Loaf) and Earl (Randy Travis) meet Crews, the guy “sent down from the top” to make the delivery. Red, like Cutler, isn’t exactly above board. Although Red speaks like a saint, it’s easy to see he’s a wolf in sheep’s clothing. Meanwhile, Earl is mild-manned and the opposite of Red. The soft-spoken trucker and aspiring country singer is to accommodate Crews up to New Jersey, then drive the rig back.

We also meet Sonny (Gabriel Casseus) and Wes (Brian Vincent) at the yard, who will tail the shipment in Sonny’s Camaro for “protection.” Sonny is cool as a cucumber and becomes integral to the story. Wes, on the other hand, is a tool. Nobody likes Wes.

Things ratchet up soon after everyone hits the road. The deal between Red and Cutler falls apart, so Red decides to hijack the cache of weapons on the semi. Crews and company fend them off – for now, anyway – but back in Jersey, Cutler has taken Crews’ family hostage. Complicating matters are FBI agent Ford (Charles S. Dutton) and ATF agent McClaren (Stephen Tobolowsky), who are in hot pursuit as Crews barrels ahead to New Jersey to save his family.

Black Dog is cut from a similar cloth as Sorcerer, William Friedkin’s forgotten 1977 thriller that had the unfortunate luck of going against Star Wars at the time. Likewise, Black Dog was fighting its own cinema heavyweights in the summer of 1998, like Armageddon, Godzilla, and Saving Private Ryan. In the same vein that Sorcerer is not a car movie, neither is Black Dog, but a cornerstone of both films is the wild, outright insane driving of big trucks.

Swayze, named Sexiest Man Alive in 1991 by People magazine, started driving truck in his youth to help his grandfather. The Dirty Dancing star told Access Hollywood that he loves the open road and went back to school to brush up on his truck driving skills ahead of filming. In Road House, Swayze was composed behind the bar as Dalton, and his performance is nearly identical here as Crews at the helm of his chariot of choice, a Peterbilt 379 (which Swayze ended up owning after the movie).

Before leaving the yard, director Kevin Hooks (Passenger 57, Fled) takes us inside the garage for all the deets on the Peterbilt 379. Although experienced truckers have pointed out continuity errors, we are told the black rig houses a 3406 turbo Cat with a Fuller-Eaton 10-speed. In one of the most memorable scenes in the movie, Crews tells Sonny there “ain’t nothing like a Caterpillar engine.”

Perhaps underappreciated at the time is how Black Dog delivers a few good zingers, including Swayze’s “first time” and “a Mazda” quips, Meat Loaf’s “you planning on having kids” rant, and Dutton’s colorful description of what ATF stands for. Meanwhile, Earl’s horrible singing is part of the charm that is his character, but the film’s actual soundtrack is a gem for any country music fan. Lee Ann Womack, Gary Allan, Patty Loveless, Linda Davis, and Steve Earle have songs in the movie.

Randy Travis, not in character, appears on the soundtrack singing My Greatest Fear while Rhett Akins does a bang-up cover of Eddie Rabbitt’s Drivin’ My Life Away. Interestingly, Black Dog was released on May 1st, 1998, and Rabbitt died shortly after on May 7th. Both Swayze and Meat Loaf have also since died. Perhaps this is why movies like Black Dog are so appealing, now a quarter century later.

Is Black Dog a Good Movie?

Critics sent this trucker tale to the pound in 1998, but that hardly matters today. Black Dog will take you back to all the feels only the late ’90s could create, something further accented by the film’s soundtrack. The best part about movies like Black Dog is saying, “I haven’t seen this in forever!” when it pops up on one of your streaming services.

In the summer of 1998, I was still in high school, sacking groceries at the local Fareway. My friends and I loved this movie because we loved trucks, as Iowa boys are want to do. I still love big trucks, and I still think Black Dog is a good movie. Nothing has changed in that regard.

In the automotive world, the writings of a critic mean little if you are truly drawn to a particular vehicle, especially as time goes on and said vehicles become more rare. I suspect the same logic applies to movies. So when you finish work, grab some pizza and a beer, and go hog wild with Black Dog.

As of this writing, it’s included with STARZ on Amazon for streaming, rent, or purchase.