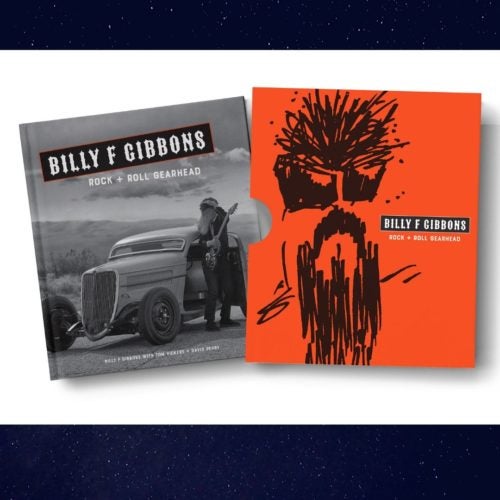 Although first published in 2005, Billy F Gibbons: Rock + Roll Gearhead received an expanded re-release in 2020 for the 50th anniversary of ZZ Top. The book is packed full of custom guitars and hotrods that are now the stuff of legend.

As the title would lead you to believe, this is a book about all the cool stuff Billy Gibbons owns. Yes, that would be the same Billy Gibbons – sorry, Billy F Gibbons these days – from ZZ Top. Obviously, a working musician builds up a guitar collection whether they want to or not, but if you’re a guy like Gibbons, your guitars will be inspired by hotrods. Gibbons is a noted gearhead, being one of the first people to bring Boyd Coddington into a wider public view, who later was the star of American Hot Rod on TLC.

Billy F Gibbons: Rock + Roll Gearhead could have been a self-serving ego trip, but it’s much better executed and with a lot more depth than that.

Look at the situation this way: Say you get rich. And I mean real rich. Like, cashed in your Microsoft stock options, and now you’re worth tens-of-millions of dollars, rich. What would you do with all that money? Well, I know what I, and any other self-respecting gearhead would do: Buy cars! Lots of very cool cars. Carl Anthony (our editor here at Automoblog) and I have had this discussion many times. We even have a name for it: we call it “The Lotto Garage,” because the only way this will happen for a couple of automotive writers like us is to win the Lotto.

If this were to happen, at some point, the temptation would be to at least document what you’ve got. And hey, since you’ve got more cash on hand than the nation of Burundi, why not put all your cool stuff into a cool book. You can sell the book and, most likely, even give a few copies away to show how rich and “on fleek” you are. Gibbons could have done this, but this book seems more sincere than that.

Despite all his outsized persona and buffoonish style, Gibbons actually knows a lot about guitars and cars and seems like the sort of guy who’d be a friend of mine (I know lots of musicians, and there’s tons of overlap with the gearhead community). It’s just that Gibbons is “always on,” and it always seems like he’s playing a part. Maybe he is. Maybe he just doesn’t know when to stop or even wonders what happened to the original Billy Gibbons from all those years ago.

If he’d calm down, he strikes me as the sort of guy you could riff with over beers and talk about Von Dutch and Howlin’ Wolf and Ed Iskenderian and Lightnin’ Hopkins. But I digress.

First off, it’s a very nice book. I mean very nice. The photography, a mix of color and black-and-white, is top-notch. As photographer David Perry does his thing behind the camera, Gibbons joins author Tom Vickers, a longtime music industry pro who has worked as a journalist, publicist, producer, and an A&R rep. The written content, just like the photography, is entertaining, informative, and as idiosyncratic as the book’s main subject.

Billy F. Gibbons: Rock + Roll Gearhead is divided into three parts: The Life, The Cars, and The Guitars. The last two are self-explanatory, but The Life is about just that. It’s about how young Mr. Gibbons went from being a Texas kid fascinated with music to being a working musician to being a bonafide rock star.

Gibbons embraces the little details, and it’s what makes this book so entertaining. Some may dismiss it as minutia not worth mentioning, but talking about string gauges is as enjoyable as talking about valve lash adjustments at length. Oh sure, you and I and every other enthusiast (both music and automotive) could dwell on that stuff for hours (just ask our ex-lovers), but the general public would rightfully run for the hills.

Still, everything is there in Billy F Gibbons: Rock + Roll Gearhead. Guitars in the book include the ’59 Les Paul sunburst known as “Pearly Gates” and the “Furry One” of MTV notoriety, along with cars like the CadZZilla, Kopperhed, and Eliminator, the latter being one of the most famous cars in all of ZZ Top’s history.

It’s worth noting the book is nicely bound and comes with a slipcase. It’s orange, which might be glaring to some bookshelves, but it really stands out, kind of like Gibbons himself. So that counts for something.

While this is the type of book every car and music lover should have, if you happen to be looking for an upcoming birthday or anniversary gift, then Billy F Gibbons: Rock + Roll Gearhead will not disappoint. You can grab it now on Amazon.