The Michigan Science Center will host AutoSens Detroit 2019 as the global conference on autonomous driving returns to the Motor City starting today, May 14th. Attendees, speakers, sponsors, and participants leverage each other’s expertise during the event, which examines the biggest challenges facing self-driving and vehicle perception technology. AutoSens serves as a venue for engineers, researchers, and other experts in the field, and provides them a detailed picture of what is happening across the industry.

“The challenge of the automotive industry is to design computers and robots that can perform tasks better than humans can, while also causing minimal disruption to a system that will include human-driven vehicles for many decades to come,” said Robert Stead, Managing Director, Sense Media, the parent company of AutoSens. “It’s no easy task.”

AutoSens Detroit returns with another robust agenda for conference attendees. Highlights include the opening plenary with presentations from the U.S. Highway Loss Data Institute on the impact of current ADAS technologies on road safety. Technical workshops include a session from Osram about infra-red sensing and a hands-on demonstration from 3M regarding material-sensor interaction systems. Microsoft will host a tutorial on the Robot Operating System, while DeepScale will present energy-efficient approaches to autonomous driving.

“The technical presentations focus on these topics, but we also cover the wider issues facing development of ADAS and autonomous vehicles in the conference plenary sessions that open and close the event,” Stead explained. “This might include the regulatory, financial, or legal context for the development of vehicle perception systems.”

Keynote for AutoSens Detroit this year is Ed Bernardon, VP of Strategic Automotive Initiatives at Siemens. Bernardon will examine how autonomous technology will impact the future of transportation. In preparation, he and his team interviewed experts working on 3D-printed autonomous shuttles, intelligent traffic systems, and even flying cars. In addition, technical presentations from General Motors, Changan, Aptiv, Daimler, NVIDIA, Valeo, Sony, and TomTom are planned. Academic sessions include those hosted by Wayne State University, University of South Carolina, and MIT.

Different than other conferences and events on autonomous driving, AutoSens keeps its focus on the engineering community. By combining cutting-edge academic research, industry R&D, and OEM insights, AutoSens is an invaluable resource for those in the field, and why it remains the world’s most influential summit on autonomous driving.

“Engineers can ‘take the boxing gloves off’ and just be engineers and scientists working on shared challenges and pursuing high-quality technical work,” Stead said. “We strive for high-quality technical presentations at AutoSens every year, so all attendees will go back to their office or lab with some new solutions, food for thought, or novel information.”

Between two yearly events (Detroit, Michigan and Brussels, Belgium), AutoSens draws in over 1,000 engineers and technical experts throughout the world to network, collaborate, and ultimately address the biggest challenges facing autonomous driving.

“AutoSens exists simply to support and help engineers and scientists, and when we hear stories from attendees about the new people they met, the things they learned, the business connections made – that’s what keeps us motivated,” Stead continued. “It’s about creating a meeting place and community that can be a catalyst for others, in their pursuit of good science.”

With the success of AutoSens in both Europe and North America, the conference is now seeing increased demand from the automotive industry and corresponding technology sectors. As a result, a third conference in Hong Kong is set to join Detroit and Brussels next year. Organizers say Asia is an important market for autonomous technology, and an international hub for engineers, researchers, and other automotive experts. Hong Kong, with its accessible transport links, allows visitors from across the Asian continent; as well as international attendees the chance to examine autonomous vehicle technology and its impact on the Asian market.

“AutoSens has quickly established itself as the event in this space to see, hear and meet the key companies and people that matter in the autonomous vehicle sector,” said Rudy Burger, Managing Partner, Woodside Capital Partners, and frequent AutoSens speaker. “Launching a third edition in Hong Kong is an exciting and valuable proposition for the industry.”

“I can’t think of a better combination,” added Abhay Rai, VP of Product Marketing, Visteon. “The latest innovations from Asia, the backdrop of one of the world’s most famous cities, and the global AutoSens community convening for the latest addition to the world-class event series.” 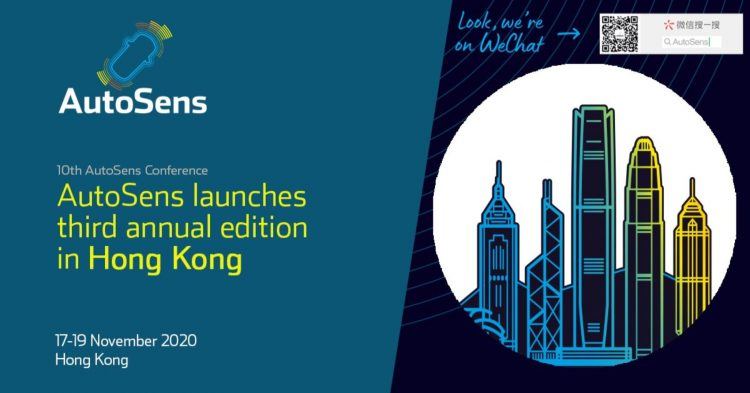 More than a year and a half out, AutoSens Hong Kong already has a number of highly invested stakeholders. Expert advisory board members include representation from Aptiv, Byton, Valeo, Visteon, and Robert Bosch with founding partners from top companies such as Visteon, IAV Automotive Engineering, Siemens, OmniVision, Kalray, ON Semiconductor, Viavi, Woodside Capital Partners, and XenomatiX.

“We are incredibly proud to announce 13 founding partners and advisory supporters,” Stead said. “It’s very encouraging to see the level of support that’s been shown upon sharing our vision for the next phase of the AutoSens journey.”

Organizers will take the rest of the year to develop the agenda for AutoSens Hong Kong, but say attendees can expect sessions on sensor hardware, image processing, driver monitoring, computer vision, and regulatory challenges among others. AutoSens Hong Kong will feature over 300 delegates, 45 speakers, and nearly 12 hours of networking. The conference is set for November 2020.

“We are already dedicating significant resources to building momentum in Asia, and to see the recognition of these efforts by such a high level of early support is testament to our brand, achievements, and reputation to deliver,” Stead continued. “We place a high value on the confidence shown to us by our customers, and we are committed to delivering above and beyond.”

AutoSens Detroit 2019 begins today Tuesday, May 14th at the Michigan Science Center and runs through the 16th. Organizers say they are happy to see so many returning exhibitors alongside plenty of new brands. A demonstration event is also planned for the 14th, where attendees can take laps in vehicles equipped with autonomous technology.

“AutoSens is all about nurturing the global community of bright minds who are driving forward this revolution in automotive,” Stead said. “A truly international audience will assemble in downtown Detroit to collaborate and learn from each other’s experiences, meet new people, and catch up with old friends.”