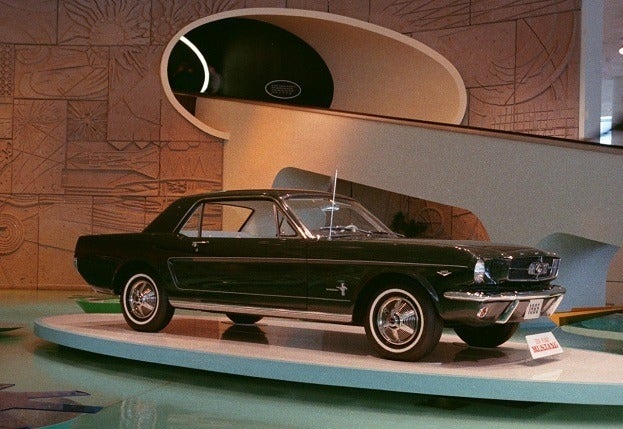 The typical lifespan of a horse is 25 to 35 years. This week, one horse is celebrating 50 years of life and is livelier than ever. April 17th will mark the golden anniversary of the Ford Mustang’s public introduction at the 1964 New York World’s Fair. Named after a wild horse, the Ford Mustang became wildly successful. Instantly catching the world by storm, even the Ford Motor Company was caught off guard by the sensation they caused with the original pony car. It took only two years for the endeavouring Ford Mustang to be tamed by a million owners. The success of the Mustang also spanned the Chevrolet Camaro and Dodge Challenger as direct competitors wanting a piece of the pony car market.

A more modest figure of the muscle car era compared other American performance vehicles, the Mustang sought and succeeded in attracting the “Baby Boomer” driver. The decades that followed the so-called 1964.5 Ford Mustang has seen some massive cultural changes. To illustrate the 50-year path of the Ford Mustang, here are a few examples of how different the United States is compared to when the car first registered its place in the hearts of enthusiasts:

– From 1964 to 2014, eight presidents have preceded over the United States.
– 191 million people lived in the United States in 1964. The population of the country was rated at almost 314 million in 2012.
– The cost of a gallon of gasoline from an American station has climbed from 30 cents in 1964 to the current amount of $3.17.
– At the time of the Ford Mustang’s introduction, the US government was still debating the Civil Rights Act.
– Fast food chain McDonald’s had around 500 restaurants in 1964 (today, the worldwide restaurant count is over 34,000).
– Only 3.1 percent of households had color television sets.
– In 1964, the hottest portable device was the Kodak Instamatic Camera.

Leading up to the golden anniversary, we have provided a number of articles only etching at the ground Ford’s wildly car has treaded across as part of Pony Week marked with a momentous Thursday. Famous first-gen Ford Mustangs, the concept prototype Mustang II and most recently an acknowledge of the actual birth date of the car at the Dearborn Assembly Plant. In honour of the 50th anniversary of the Ford Mustang, Automoblog.net will be posting several themed pieces over the course of this week on the car’s five decades of history.