Best Time To Buy A Car? The Holiday Season Might Be One

Brace yourself. The holidays are coming. Extended hours, big savings, and hordes of ambitious shoppers camping out (literally) at the front of the line. While clothes, games, and electronics are often top of mind, what about a larger purchase like an automobile? Do Black Friday and Christmas deals exist on cars?

What about this time of year in general? Is it really the best time to buy a car?  Conventional wisdom says yes but we talked with the experts for a consensus. There are a few things to consider before shopping for a car this holiday season.

Black Friday is a great day for pre-owned vehicle shoppers, according to a study last year by iSeeCars.com. The iSeeCars.com team analyzed over 48 million one- to five-year-old pre-owned sales from January 2013 through December 2016 to determine when the best deals were offered.

A “deal” was defined as a savings of at least five percent.

Overall, based on the percentage of deals offered, November is the best month, with pre-owned car shoppers receiving 38.4 percent more deals on average. December (38.2 percent more deals) is close behind. By comparison, October comes in at 16.7 percent, January at 19.9 percent, and February at 4.8 percent.

May was the worst month, with 28.3 percent fewer deals on average.

“While Memorial Day and July 4th have associations with car sales and better deals, that doesn’t seem to hold for used car sales,” Ly said. “We found fewer deals than average on those holidays, and the months from late spring through summer are generally not great for finding used car deals.”

Last year, the November Dealer DataView index found dealerships see an increase in web traffic during the fall months. Their report says the extra web activity may usher in a “relatively robust selling climate” as dealerships prepare for Black Friday and Cyber Monday.

“At the beginning of November, we saw a number of dealers and automakers launch Black Friday and holiday promotional events – the famous red bows came out – as they do every year as a way to close out the year on a high note,” said Michelle Krebs, Executive Analyst, Autotrader.

Those who need a new vehicle but want to maximize their savings should consider a 2018 model.

“Between now and the end of the year, consumers will find excellent prices and more negotiating room on leftovers,” Krebs explained. “Automakers and dealers do whatever it takes to clear out the previous year’s inventory before the start of the new year.”

Pre-Owned Vehicles: Which Cars Have The Best Deals?

The BMW 3-Series, Ford Fiesta and Focus, and the Chevy Camaro take the top spots, followed by two Volkswagens, the Passat and Jetta, then two Mercedes-Benz models, the E-Class and C-Class. The Ford Mustang and Audi A4 complete the list. In a separate study, iSeeCars.com analyzed over 2.4 million one- to five-year-old used car sales to determine which models are most likely to offer savings of at least five percent during the month of December.

The study found the average used car price is $20,243, meaning a savings of five percent can warrant shoppers a savings over $1,000.

“Those who are looking to purchase an used car during the month of December should consider these models if they are looking for a good deal,” Ly said. “Given the declining sedan segment, dealers are more likely to discount these cars in order to sell them.”

With regard to SUVs, the Ford Edge and GMC Acadia top the list, followed by the Dodge Journey, Nissan Pathfinder, and Buick Enclave. The Chevy Traverse and Equinox, BMW X5, Lincoln MKX, and the Ford Escape are also likely to see discounts this time of year, according to the study. As to why these specific SUVs are prone to more deals, Ly offers some insight.

“Typically, best-selling and high-performing vehicles aren’t among the vehicles most likely to have the best deals, which makes the Escape an excellent cost-saving opportunity for those looking to purchase this vehicle,” he explained. “The Acadia, Traverse, and Enclave share the same platform and other mechanical components, and these similar vehicles don’t sell as well as their competition in the midsize SUV segment.”

The study also examines which pickup trucks have the best deals this time of year, although that might be a bit more challenging.

“Due to their high demand, pickup trucks are the vehicles with the lowest percentage of deals at 34.1 percent, while SUVs are at 38.5 percent and cars are at 43.4 percent,” Ly said. “However, deals do exist on certain models and can be found if the shopper is willing to look around.”

The full study from iSeeCars.com can be found here.

Always verify – through an independent mechanic if necessary – the overall condition of any pre-owned vehicle. Ask about key maintenance items like brakes, tires, belts, and the battery. When were they last changed, or if not changed recently, what are the current measurements for the brakes and tires. Another good question to ask is warranty: is there still a balance of the factory warranty, or does the dealer offer any type of after-sale warranty.

“Used cars can look good but still have problems that could be expensive to fix,” said Brandon Grade, Service Advisor at Findlay Toyota in Las Vegas, Nevada. “Personally, I try and steer people towards a certified pre-owned vehicle that comes with a warranty.”

Related: Financing versus leasing: which one is right for you.

Due Diligence: Don’t Believe Everything You See

Those big inflatable gorillas and “Sales Event” banners? They may only be there for show.

“The deals this time of year are pretty good, but prices specifically on Black Friday are about the same as they are the week before or the week after,” Krebs explained. “Automakers and dealers simply try to ride the wave of the shopping frenzy created by Black Friday.”

“Don’t assume because it’s Black Friday that every car from every dealer is discounted,” Ly added.

Due Diligence: Read It Twice

Always read the fine print – or as we say in the business – follow the asterisk to the bottom of the page. Those brightly-bolded low payments might be subjected to certain terms and conditions. In the case of a lease, those flashy low payments are only achieved with significant down payment. And sometimes, the advertised car with the best deal is actually the lower trim level.

Keep in mind seasonal factors too. For example, 4×4 trucks and SUVs can command higher premiums during winter months, similar to how convertible sports cars can in the summer. 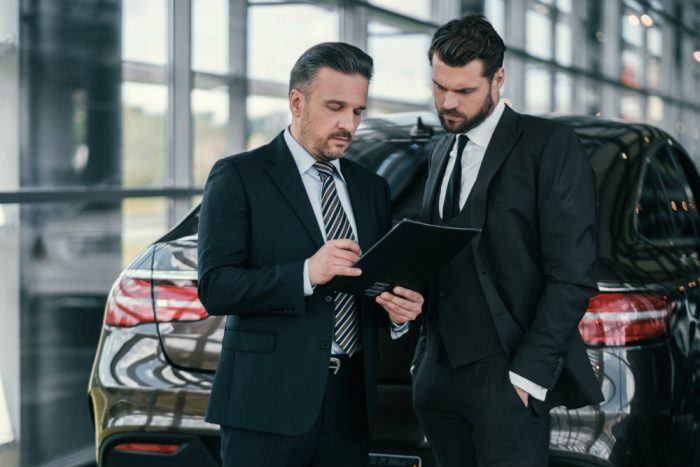 If you need more advice on the buying process or insight on a particular model, please contact us. iSeeCars.com also provides this handy video on questions you should ask at the dealership. Overall, the holiday season is likely the best time to buy a car but just be careful.

“Just because there are more deals offered on Black Friday doesn’t mean the general rules of thumb about buying a car don’t apply,” Ly said. “Doing online research ahead of time, figuring out your budget, test-driving the car, and getting it inspected by an independent mechanic are still important.”

And above all? Trust your gut.

“If it seems too good to be true, there’s most likely something wrong so stay away,” Grade said. “Don’t be afraid to walk away.”