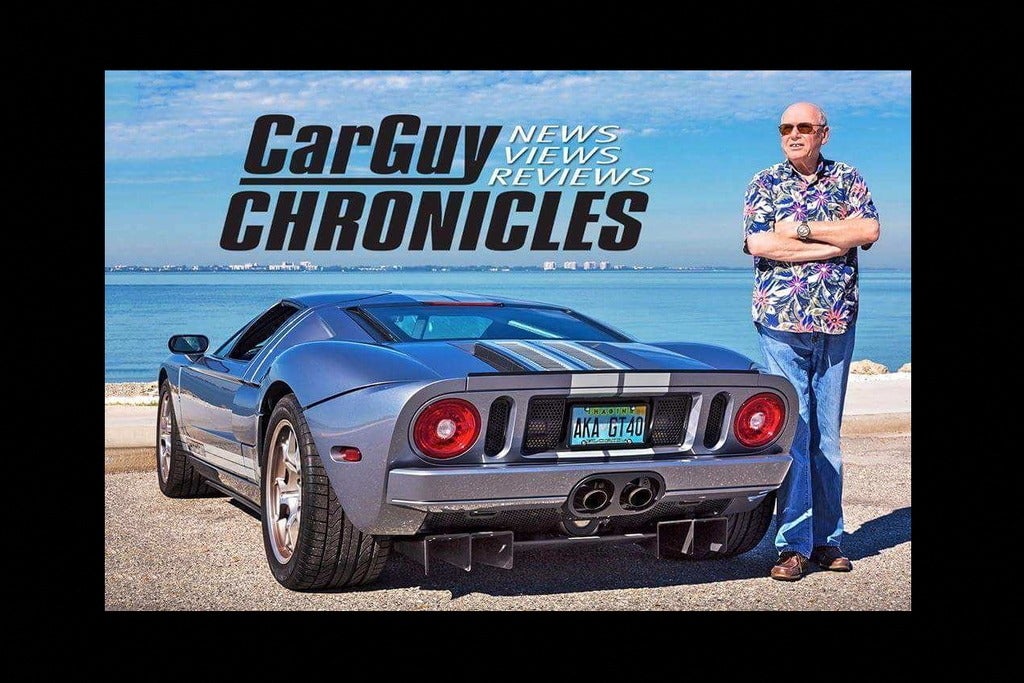 Marty Schorr was destined to be a car guy. His teachers might have showed us his notebooks, which contained more car sketches than coursework. His hot rod club buddies in the 1950s in Westchester County, New York would likely agree. Schorr was always a true car guy. He admits to drawing pictures of cars in school, but the second point requires a little clarification.

“I was really not that good with mechanical stuff as far as working on the cars, so they had to find a job for me in the club,” Schorr said with a chuckle. “So they made me the public relations or publicity director.”

As a journalist and editor, Schorr has over five decades of experience with the world’s most amazing machines. He rode with Carroll Shelby and was at the press conference for the debut of the Lola-built Ford GT that became the GT40. He drove the GT40 on the streets of New York City and accompanied Mickey Thompson to Bonneville in 1969 to set a book full of records. And books are Schorr’s thing. His latest, Day One, was featured at the end of December in our Book Garage series. But before all that was just another young man trying to make his way.

“I would take some pictures of the cars and the guys, and go to the track where they put on some shows,” Schorr recalled. “I had a regular job. I was working for an insurance company and I was going to college at night but I was able to meet people at the magazines.”

Schorr would write the club’s press releases and drop them off at Custom Rodder and Car, Speed and Style, two Manhattan-based magazines run by Magnum Royal Publications.

“After doing this for a while, I realized the editor of the magazine didn’t have a driver’s license and he lived in New York City,” Schorr said, pointing out the irony of how one does such a thing. “And while he went to one of the best schools for journalism and he was a good editor, he really didn’t know a lot about cars. He would call me up and ask me questions all the time and that got me started doing freelance work.”

Shorr’s weekends filled up quickly for the next couple of years as he hit the area’s racetracks and hot rod shops. His work landed him anywhere from $35.00 to $50.00 per feature, good money considering the time, but not enough to stake a future on.

“I was getting a byline and the magazines were cool, but as I talk about in Day One, I was in a position where I was out of a job – a real job,” Schorr explained. “I was getting married in probably 4 to 5 months and my wife, my future wife, was going to college and she didn’t have a job either. We were not in great financial shape.”

Late one morning, Schorr was delivering his features per the usual. As the elevator opened to take him upstairs, the publisher exits.

“I had only seen him once or twice before but he recognized me,” Schorr recalled. “He said ‘umm, I’m going for a quick lunch; why don’t you hang around and I’ll come back because I want to talk to you.’ So, I went upstairs and talked with the editor, gave him my stuff, and waited until the publisher came back.”

The First Day One

What transpired next is something Shorr refers to as life-changing. Turns out, the editor, Larry T. Shaw, was devoting all his time to CARS, another magazine at Magnum Royal Publications. Custom Rodder and Car, Speed and Style were in need of an editor and the publisher, Irwin Stein, had found his man.

“The publisher comes back, walks into the office, and says ‘how would you like a job?’ So I said ‘what job?’ And he said ‘editor of these magazines.’ I was tongue tied, I didn’t know what to say. I didn’t have a college degree, I was going to school at night, I had never edited anything except my own copy. All I did was nod because I couldn’t get the words out.”

Schorr, then 24 years old, was now making $100.00 a week, with two raises three months apart at $10.00 each. In the span of a few minutes, he had moved from contributor to editor, with a significant pay increase and the responsibility of producing two magazines. By 1965, Schorr had Magnum Royal’s flagship CARS and was made Editorial Director. In the early 1970s, when the company went public, he was named Vice President of Editorial. Schorr would later venture out to produce his own magazines, but that day and Stein’s words still resonate. It was, in so many respects, Schorr’s first “Day One.”

“I called my fiance and said ‘we can get married now, I got a job!'”

During his years with Magnum Royal Publications, Schorr regularly drove and evaluated what would become history’s most coveted performance cars. These experiences are recounted in Day One, where we see Pontiac’s 1962 and 1963 lightweight Super-Duty 421 street and Swiss Cheese models, Chevrolet’s 1963 big block 427 Mystery Motor, and Ford’s 1963 Galaxie fastback. There is the Cotton-Owens Hemi Coronet, Plymouth’s original 1968 Hemi Road Runner, Boss 429 Mustangs and so many others.

“It was really a wonderful time to go out and see the engineers, drive the cars, and get up close and personal with the guys that made all this happen,” Schorr said. “Back then, it was just a day’s work and they were just cars. And the following year, they’d be cheaper and they’d be faster, and so we treated them as such.”

Two years ago, while attending the Muscle Car and Corvette Nationals in Chicago, Illinois, the inspiration for Day One arrived. At the time, Schorr’s book Ford Total Performance was being launched by Motorbooks, our esteemed partner for this Book Garage series. It was in Chicago that a candid exchange with publisher Zack Miller took place. Schorr addressed a common misconception about muscle cars, and how mainstream books, car shows, and other media only perpetuate that notion. Miller asked for a hook.

“I said, well I drove those cars when they were new and I know what it’s all about – they weren’t like this. They didn’t look this good, they didn’t have paint jobs like this, and the fit and finish was pretty mundane. We drove these cars and they got dirty when we took them to the track, and they weren’t perfect. Young people coming to these shows walk away thinking that’s what a GTO looked like in 1965, and it was only three thousand and it looked that good. They don’t realize the paint job on the car now is worth more than three grand. I want a book that says this is the way it was, and it’s not exactly the way you see it today.”

“He said to me ‘Marty that’s the hook now write the book.'”

Later in his career, Schorr handled Buick’s East Coast public relations and was extensively involved in the GNX program in 1987, one he credits to changing his mind about the brand. Schorr had a 427 Corvette but the Grand National was a rising star.

“I had driven the prototypes and the car was pretty damn fast – it was quicker and faster than the stock Corvette, and General Motors didn’t like that; Chevrolet didn’t like that,” Schorr recalled. “We did tests at Popular Mechanics with one of our GNXs versus a Callaway, and we mopped up the track with the GNX. We blew the Callaway into the weeds and that was a twin turbo Corvette! We really started a whole little revolution within General Motors with that car.”

A bumper sticker later surfaced with the phrase “We Brake for Corvettes.”

“Chevrolet and General Motors came down on us like a ton of bricks!”

After conversing with Schorr, I understand why this business – call it automotive journalism – needs such an ambassador. During our interview, on several occasions, he expressed how grateful he was for my time. Should one compare our careers, it’s like the CEO acknowledging the intern. But man, do I ever hold my head higher now. Friends of mine in the profession, Ray Guarino and Joe D., hosts of MotorMouth Radio on WHPC 90.3 FM, refer to Schorr as an “elder in the business” and have the same respect for him I now do.

I have them to thank for the introduction.

Perhaps most inspiring was how I found an instant parallel between myself and Schorr, when he admitted CARS Magazine couldn’t match the larger, California-based publications at the time.

“We didn’t sell as many copies, we didn’t make as much money,” he said. “We didn’t have the advertising but we had an abundance of New York attitude.”

It’s similar here at this publication, minus the signature New York attitude of course. Likewise, we cannot match our larger contemporaries in the business, they simply have more resources. We admire and respect them certinately, but our goal is to be different; to be honest; to be real. It’s why we run features like Book Garage, to which Motorbooks has been instrumental. When we showcase books like Day One, it reminds me of the importance of such things. For me personally, it goes beyond the deadlines and even the cars. It requires me to ask if I am going to live in a “one day” or “Day One” mindset.

“Don’t postpone joy, always try to have fun, and do what you really enjoy doing,” Schorr advised. “I have spent the bulk of my adult life living by those mantras.”

Day One: An Automotive Journalist’s Muscle-Car Memoir is available through Amazon and Motorbooks.