Ten years ago, the notion of an all-electric luxury supercar from a manufacturer like Aston Martin would have been unheard of. But in 2015, it looks like anything goes. There’s no doubt – things have changed. And the new Aston Martin DBX concept car is indisputable proof.

Take a closer look and see for yourself.

With an elongated front end that sports smooth, straight lines reminiscent of the not-so-luxurious Honda Crosstour (Sorry, Aston Martin, we know Honda probably wouldn’t be your number one choice for a comparison), this exquisite concept is a real looker, with plenty of cues taken from Aston’s mad One-77 hypercar.

From its mesmerizing black pearlescent paint job to the obviously excruciating detail of its construction and manufacture when viewed up close (see below for more pictures and video), there’s no single part of this new concept that wouldn’t absolutely wow any auto enthusiast. Even if you don’t think Aston should be making SUVs (sorry guys, we’ve already crossed that line with the god-awful Aston Martin Lagonda, and plenty others).

But it wasn’t necessarily the impressive visual design of the car that was intended to take center stage. It’s the electric powertrain that really stands out.

Aston Martin CEO, Dr. Andy Palmer, even said as much in his statement regarding the concept’s release:

“The DBX Concept is a challenge to the existing status quo in the high luxury GT segment,” Palmer said. “It envisages a world, perhaps a world not too far away, when luxury GT travel is not only stylish and luxurious but also more practical, more family-friendly and more environmentally responsible.”

And Palmer’s team at Aston Martin definitely took electric engine technology to its limits with this new DBX Concept. The car has no engine compartment and virtually zero conventional petrol engine components. In other words, it’s pushing forward the EV technology in the direction it needs to go.

It runs solely on power generated by inboard-of-wheel motors, which are powered with lithium sulphur cells. With tech like this just on the horizon, it’s hard to imagine vehicles powered only by gasoline still on the roadways 50 years from now. As much as I love my petrol-powered cars, seeing what car makers are doing with electric power – not just for commuters but for enthusiasts – makes me think we might be holding on to our V8s for dear life.

Unfortunately, this beauty of a concept isn’t likely to grace the public with its presence any time soon. At this point it’s intended more to simply begin the dialogue between manufacturer and consumer about what efficient and luxurious driving will look like down the road.

Check out this walk-around of the DBX Concept from the 2015 Geneva Motor Show: 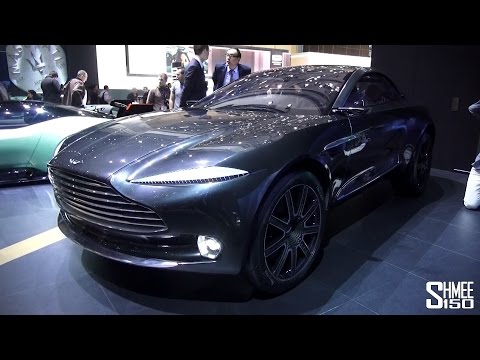 “This is, clearly, not a production-ready sports GT car, but it is a piece of fresh, bold thinking about what Aston Martin GT customers around the world could request of us in the future,” Palmer said in his official statement.

And, at the end of the day, that’s fine by us. Even it takes years for a car like this to enter production, the simple pleasure of gazing into the future of luxury driving with an eco-friendly twist is enough to satiate our hunger to see what’s next. And judging from what we’ve seen so far, the visions of that future are positively thrilling.

Check out a few more photos below. What do you think of the Aston Martin DBX Concept?