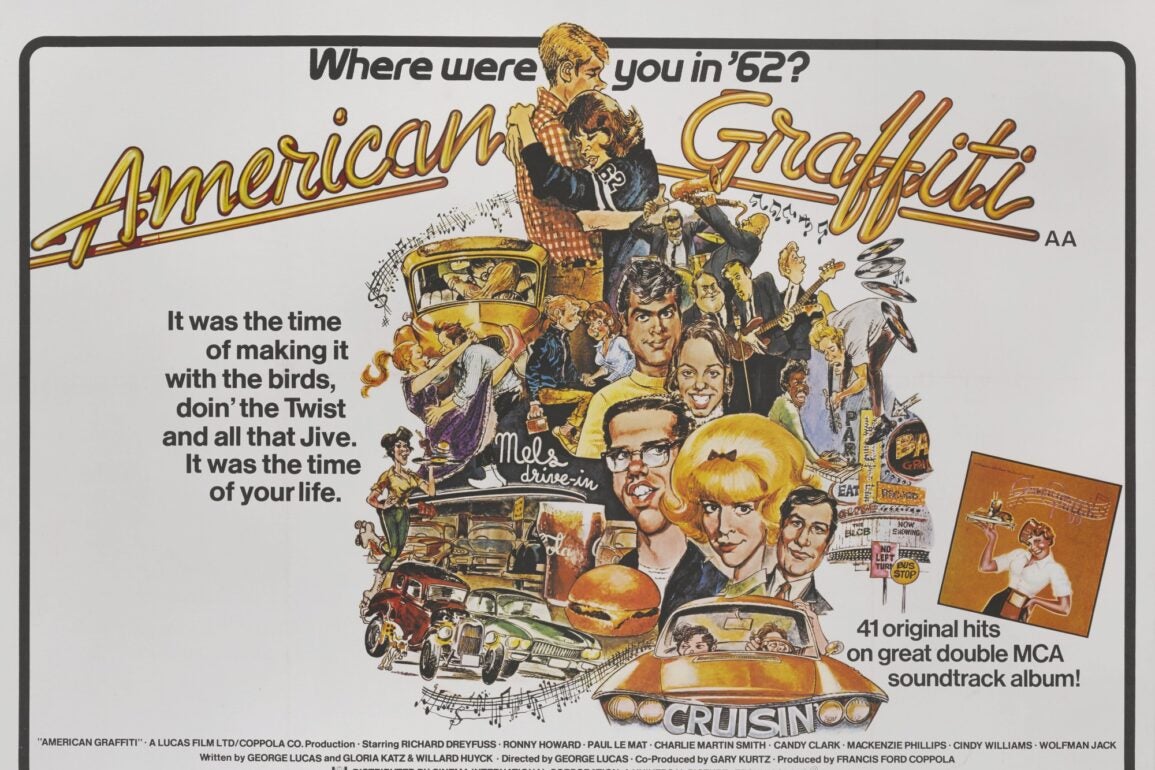 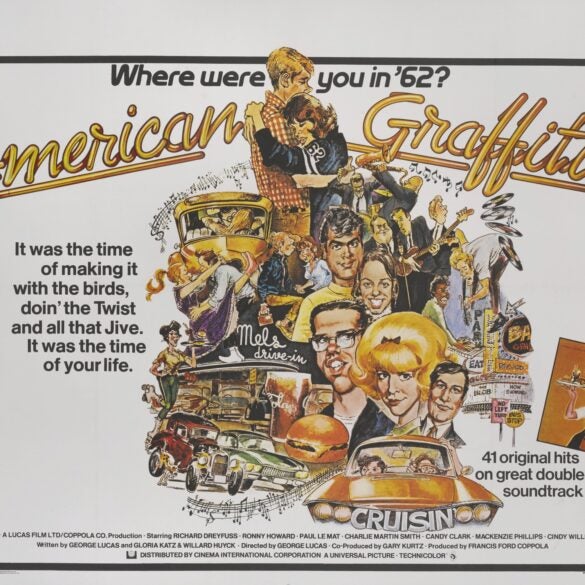 Where Were You in ’62? Why American Graffiti Resonates After All These Years 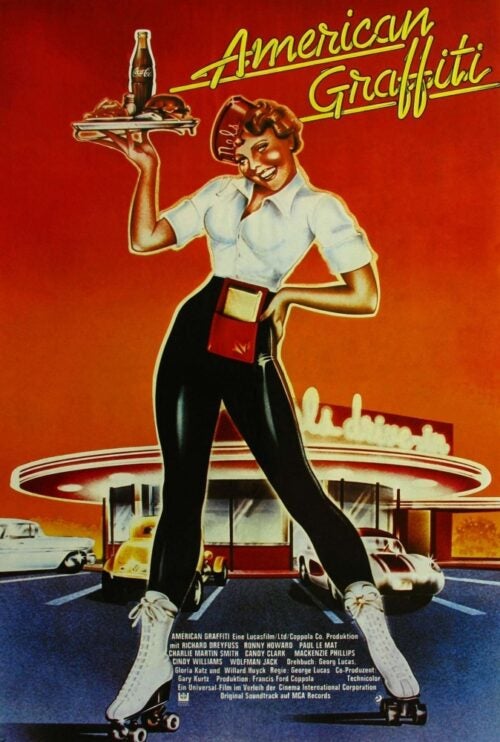 Before George Lucas made billions telling us about a galaxy far, far away, he made an unexpected hit telling us about teenagers in Modesto, California. American Graffiti‘s beauty lies in its simplicity. The film is a coming-of-age classic that follows four teenagers in the early 1960s on their last night of summer vacation.

Lucas uses that single night as a breaking point between what was and what will be, between childhood and adulthood. He treats the characters (all of which, except for one, are newly minted high school graduates) as full-fledged human beings. The story does not look down on them simply because they are young. Lucas remembers what it was like to be 18 and knows that everything is a big deal. Tonight – this night – might as well be the last night of our lives, and we better act accordingly.

American Graffiti starts with a blast: Bill Haley & His Comets cranking out Rock Around The Clock as various cool cars come and go from Mel’s Drive-In, the prime hangout in Modesto, circa 1962. This is where we meet the four main characters: Curt Henderson (Richard Dreyfuss), Steve Bolander (Ron Howard), and Terry “The Toad” Fields (Charles Martin Smith), all recent grads from the local high school, and John Milner (Paul Le Mat), the slightly older owner of the “fastest car in the valley,” a sweet ’32 Ford Coupe.

Inside The Cruising Culture

Curt and Steve are set to leave for college the following morning, so Steve entrusts his car – a hot-rodded ’58 Chevy Impala – to Terry while he’s gone. Curt confesses second thoughts about leaving. Steve’s girl Laurie (Cindy Williams) arrives, and Steve suggests that if they were to see other people, it would strengthen their relationship. This goes over about as well as you’d expect and causes most of the dramatic tension between the two.

On the way to the high school sock hop, Steve, Curt, and Laurie pull beside a gorgeous blonde driving a white Ford Thunderbird. “I love you,” she mouths to Curt in the backseat. Curt, as would any 18-year-old, completely loses it, especially when she makes a right and drives off. Steve and Laurie (who is Curt’s sister) are completely unsympathetic to what just happened. The Mystery Blonde is now Curt’s motivating obsession.

In his quest to find her, Curt goes to the local radio station to plead with the gravelly-voiced Wolfman Jack to read a message over the air and dedicate a record to The Blonde. Ah, but The Wolfman is as mysterious as The Blonde. “No can do,” says the night crew, which is just some random rocker guy. The Wolfman comes and goes but is never really there. He only drops off pre-recorded tapes.

Terry, in the Impala, and John in his Duce Coupe cruise the main drag of Modesto. Terry picks up the kittenish Debbie (Candy Clark) and thinks this idea of “taking care of Steve’s car” might just turn out alright. Milner picks up Carol (Mackenzie Phillips) through a series of miscues and miscommunications. Carol is irritating, bright, and, at the ripe old age of 12, manipulates Milner into driving her around all night.

Meanwhile, Milner encounters Bob Falfa (Harrison Ford), who has been looking for Milner for days. When you’re the fastest gun in the west, people want a shoot-out, and it seems Falfa has the goods: A nasty, all-black ’55 Chevy 210 that sounds like 707 at take-off and moves just as fast.

Dreyfuss and Howard are just the right amount of teenage angst and energy, and they both look like kids. Charles Martin Smith is the perfect geek before they had a name for it; bad teeth, bad skin, and horrid horn-rimmed glasses that guarantee he’ll never get beyond first base.

The ladies of the film all stand out. Cindy Williams is the right mixture of need and justifiable anger. Candy Clark is ditzy perfection; slow on the uptake, believing, easy; Terry The Toad never had it so good. Mackenzie Phillips is a terrifying hand grenade of a pre-teen.

It is with Harrison Ford and Paul Le Mat that American Graffiti really hits it out of the park. This is Harrison Ford right before he played Han Solo, and he is everything Bob Falfa should be: a dark, glowering hick with a chip on his shoulder and a burning need to prove himself to anyone and everyone he encounters. Ford is right on the money, playing a shadowy reflection of Paul Le Mat’s John Milner.

Milner is cooler than a bug on ice; rolled cuff Levis, cigs in the sleeve of his white T-shirt, Camel straight dangling from his lip. He doesn’t talk much because he doesn’t have to. Steve McQueen wishes he was this cool and Paul Newman wishes he was this fast. And yet, Milner hears the clocking ticking. He knows his time is quickly passing, if not already gone by. Le Mat plays this perfectly, in action and body language, if not always with the spoken word.

Indeed, the cars and music are supporting actors in and of themselves, adding to but never overshadowing the story. With the soundtrack, Lucas understood the immutable fact that rock ‘n’ roll is our music, whether we cruised in 1962 or in 2022. We don’t just listen to it; we live it. The film’s original soundtrack included Bill Haley, Buddy Holly, Del Shannon, The Platters, Chuck Berry, and The Beach Boys.

And, of course, the cars! Milner’s yellow deuce coupe with a Stromberg plant, Falfa’s “new school” 210 Chevy, Steve’s Impala with that paintwork, and Curt’s Citroen 2CV. Hey, there’s one in every crowd, and besides, it could be worse; it could be Terry’s Vespa. And finally, the Pharaoh’s ’51 Mercury Coupe. Chopped, channeled, Frenched (front and back) with a two-tone tuck and rolled interior, and all painted up in a shade of red so dark it’s almost black.

This one is my personal favorite, hands down. If that’s my ride, then I will surely join the Pharaohs with a coat and a blood initiation and all that. These were the cars we drove and the songs we listened to on the night everything changed.

Technically speaking, American Graffiti is straightforward and not at all flashy. There are no special effects to speak of, no huge explosions, no showy transitions. Mel’s Drive-In, the central nexus for the characters, was shot in the middle of downtown San Francisco, on the corner of Market and Van Ness. That Mel’s is gone (there’s still one on Geary I highly recommend), but if you’re ever at that intersection, try and figure out how Lucas and Haskell Wexler shot that with such amazing skill and craftsmanship.

In many ways, this was the first Hollywood movie that dealt with teenagers as complex people. Before that, the most respect and honesty you could find from a major Hollywood picture was something along the lines of a Frankie & Annette movie. Before American Graffiti, I saw better-drawn characters in the Sunday comics. After American Graffiti, it was different.

What makes American Graffiti work so well is the relatability of the story. Sure, there are plenty of cool cars, and that soundtrack is excellent, but the film can still resonate with a vast audience today, just as it did in 1973. You don’t have to know anything about hot rods or rock ‘n’ roll, but you’ll still understand and appreciate American Graffiti. Lucas, Gloria Katz, and Willard Huyck did a dexterous job with the script, and the choice to set it during one night is key. How many of us have had our worlds turn on the events contained in a single night? All of us, I bet.

American Graffiti is available for rent or purchase via Amazon Prime. If you are looking for some other awesome car movies on Amazon Prime, take a look at our top picks and suggestions.