Audi is pressing forward and releasing its new, smaller Q5 SUV to the public. Not the road behemoth like the Q7, the Q5 is somewhat smaller, and aimed squarely at a more urban buyer (i.e. yuppies).

Let’s take a look under the hood, shall we.

Audi’s Q5 seeks to build on the foundation established by the Audi Q7, an SUV that shares a common platform with its corporate siblings, the VW Touareg and the Porsche Cayenne. Audi is hoping the Q5 will strengthen the brand’s presence in the SUV segment in much the same way that BMW has successfully expanded into the same segment with its X models (X3 & X5). Unlike a lot of Euro offering, the Q5 was intended for the North American market from the get-go. It will show up in the USA in March 2009 with a 3.2 V6 FSI direct injection engine, quattro all wheel drive, and a six speed Tiptronic transmission. This is essentially a real no-brainer. America is still the biggest world market for both cars as well as SUVs, so Audi has to make this model variant stick here in the US if the Q5 is to succeed. The drivetrain is all pretty standard stuff for both an SUV and for an Audi. Of course, word of a diesel mill under the hood has been rumored for a while, and naturally, this will be an option from the get go for the home, European market. In America? Not so much, or at least not just yet. Audi should bring it over though, and sooner, rather than later. Also of note is that the Q5 will be the first Audi offering with Generation 3 MMI, and navigation with real-time traffic information. MMI is Audis answer to the all-in-one car computer controller first marketed by BMW with their iDrive. Very much of the Monkey see/monkey do philosophy that has been affecting German carmakers for the past several decades, Audi at least had the sense to make their MMI much more user friendly and intuitive than BMW’s much panned first-gen iDrive system.

So, there you have it, more or less. There\’s more full detail in Audi’s press release, but the real question is the viability of this car at this time.

With sales of almost every kind tanking, and with lots of people looking at SUVs as not being the smartest of vehicle choices over the past while, why would Audi continue to plow ahead with the Q5? It doesn’t take much of a Kreskin to predict that there will be fewer SUVs on the road 5 or 10 years hence, so wouldn’t it have been smarter of Audi to plan ahead with something not an SUV? Sure it would have, but look at Audi’s position. The product planning and development for this ride has been in the pipeline for years. The tooling has been done for months and the factory space has been earmarked for just as long. For Audi NOT to go ahead would have meant they would have not amortized that heavy, heavy capitalization.

So, even if SUVs are rarer than Lambos by this time two years from now, better for Audi to go ahead, do a production run, make as much dough as they can, and THEN quit, rather than quit beforehand. 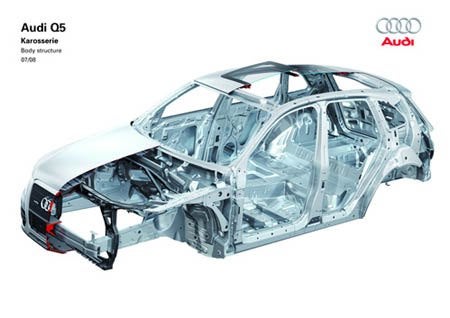