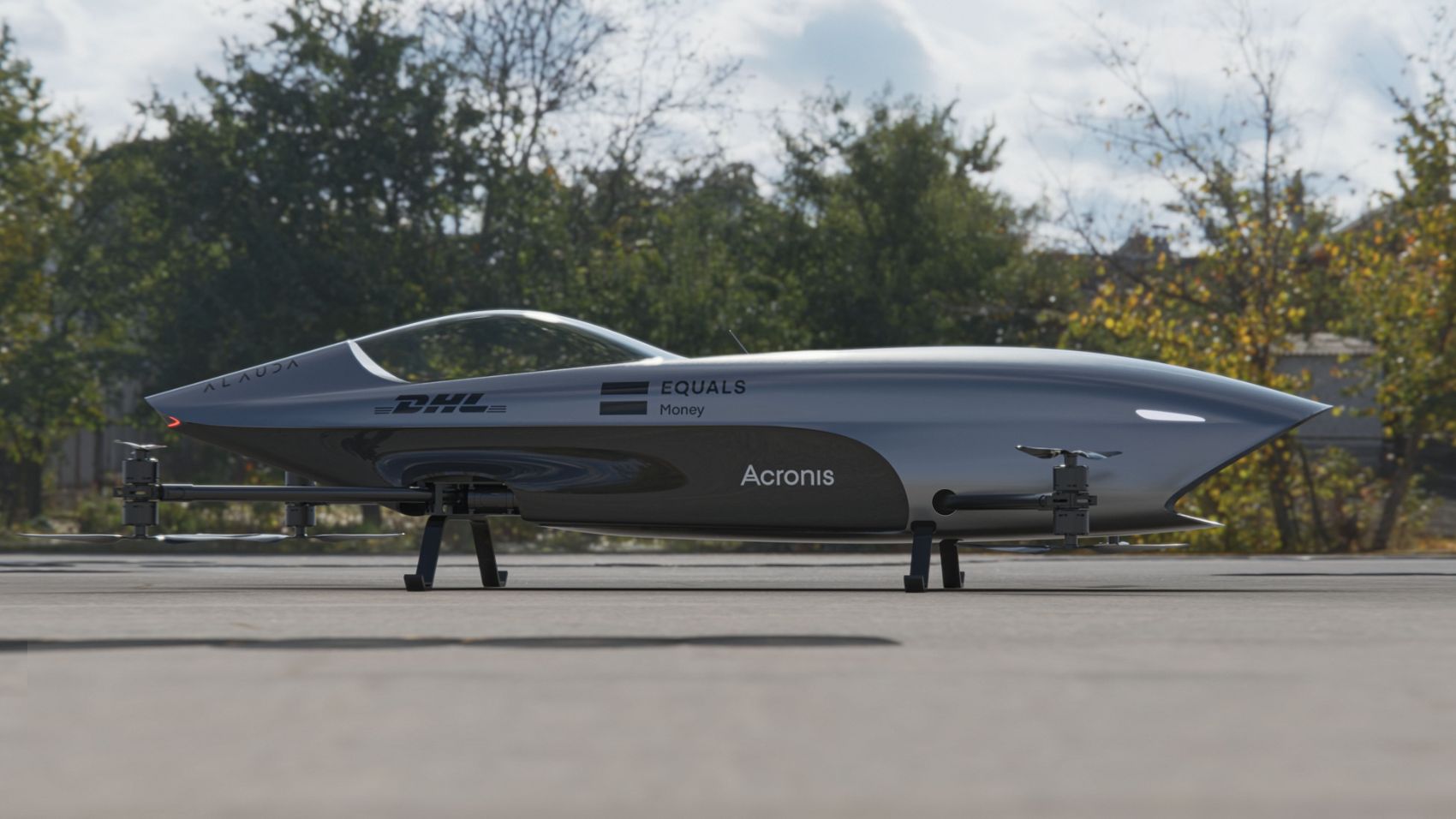 Tony Borroz
Magazine
Published: February 20, 2021
Home
Magazine
Table of Contents show
Airspeeder Mk3 Overview
Airspeeder Mk3: It’s a Bird, It’s a Plane . . .
Who Will Pilot The Airspeeder Mk3?
A Race of Space
Can It Be Done?

Who asked for this? Did you ask for this? I didn’t ask for this, I can tell you that. This is the Airspeeder Mk3, the world’s first flying electric racing car. Or at least that’s if you believe Alauda, the makers of the Airspeeder Mk3. Do you see any wheels? I don’t see any wheels. I thought cars, especially race cars, were supposed to have wheels.

Sigh. Okay, let’s have a look at what this is all about.

The Airspeeder Mk3 is a remotely-operated electric vertical take-off and landing vehicle (eVTOL). It will compete in an upcoming remotely-piloted Airspeeder racing series that will serve as a technical proving “ground” and feeder series to a manned racing series next year. A full grid of Mk3 electric flying race-craft is currently being manufactured at Airspeeder and Alauda’s technical HQ in Adelaide, South Australia.

More than 10 identical racing vehicles will be produced and sent to teams later this year. The craft, according to Alauda, is being manufactured by a team of automotive and aviation experts from companies like Mclaren, Babcock Aviation, Boeing, Jaguar Land Rover, Rolls-Royce, and Brabham.

The Airspeeder Mk3 is a big eight-rotor drone, near as I can tell. There’s a cockpit in there, and it looks like you could cram a human pilot into the thing. Alauda is planning on doing that in 2022 if all goes well with the first round of remote (i.e. drone) flights commencing this year. In so many words, the plan is to get the series working – check everything out with unmanned drones first – then roll out the full-zoot series with pilots after that. That sounds logical, and it might even be fun to watch and/or participate in, but I have some questions.

I worked for the world’s largest airplane manufacturer for six years and spent even more years in Motorsport. The Airspeeder isn’t a plane, and it’s not a race car. There are no wheels; there are skids. This is a helicopter. Now, helicopters are cool, no two ways about that, but this is still more of a chopper than a car. Sure, it kind of looks like a cross between an Indy roadster, circa 1950, and something young Anakin Skywalker would have used in the Boonta Eve Podraces, but this is for sure not a car. And it’s definitely not a plane either.

The lift is provided by those eight whirling blades mounted on those booms. This configuration is called an octocopter and uses counter-rotating prop efficiencies. It’s a fairly common layout for industrial-grade drones and sure seems to work here, at least in the brief footage provided.

So, in a certain way, the Airspeeder is the answer to every modern geek’s inevitable question, “Hey, that’s a cool drone. Could we make one big enough for me to ride in?” The answer to that is usually always yes. You might not like the experience, but given enough money for engineering, we could strap your butt to a Ford Pinto and make it “fly.” Briefly. And then I would promise you’d get a tasteful eulogy.

Who Will Pilot The Airspeeder Mk3?

So that is the stage Alauda finds themselves at. They have a big drone that seems to work okay, and once they’re done testing it, they’ll stuff a pilot in there. It won’t be me, and it (most likely) won’t be you.

Look at the size of the Airspeeder Mk3. Alauda gives no specs about lifting capability or flight duration with a given load, but this thing just isn’t very big. So that observation, combined with general common sense, leads me to conclude if you’re bigger than a jockey, you ain’t going to be flying one of these. It’s not a size thing, it’s a weight issue. I bet the all-up lifting capacity of this, fully loaded and ready to go, can’t be more than 150 lbs.

And that’s being generous.

The current Airspeeder Mk3 is powered by a 96 kW electric powertrain. According to Alauda, this electric powertrain gives the Mk3 a thrust-to-weight ratio above two. I’m not sure what that even means. A 2:1 lift ratio? A 2:1 thrust-to-weight ratio? Laded or unladen? Alauda says the Mk3 weighs just 100 kilograms (220 lbs.) unmanned and will fly at speeds in excess of 120 km\h (about 75 mph).

A Race of Space

Have you ever been to an air race? If you’ve ever been to a car racing track, you will always be taken by the massive scale of the place. The Indianapolis Motor Speedway and Daytona International Speedway are gigantic speed bowls that have to be experienced to understand their size. Aircraft facilities usually dwarf such picayune sites like IMS. Boeing’s Everett assembly facility, the largest building in the world, is so big you can see it from orbit with the unaided eye. And that pales compared to the size of the runways, taxiways, and aprons next to the building. The main runway is nearly two miles long.

Go and look up Edwards Air Force Base in the California desert on Google maps, and that’s the scale of the “racecourse” Airspeeders will be dealing with.

Look, air races a staggeringly impressive feat. You stand there on the ramp when they fire up half a dozen WWII vintage airplanes with engines displacing more than 2,800 cubic inches. No joke! These guys run engines displacing 46 liters. It rattles your guts and literally shakes the ground under your feet. Then they take off, and they are g-o-n-e gone! Whoosh!

There’s a continuous far off rumbledrone, and you see cruciform flecks way off in the distance against the clear blue desert sky and then grrrRRRRROARARRRRrrrrrr they come screaming by you at speeds you can barely cognate at altitudes so low it would make a water-bomber pilot think twice. Then whoosh, they’re gone again.

The course for the Reno Air Races (the premier air race on the planet) is nearly eight miles around. That is more than three times the size of IMS, and IMS is big enough to hold all the baseball stadiums in the major leagues in its infield.

The bottom line here and the indisputable fact is that flying and anything to do with it takes up vast amounts of space. Ergo, watching air racing sucks from a spectator standpoint. So sure, let’s give Alauda the benefit of the doubt. Say they get these things working well enough to stuff a five-foot-nothing, 90 lbs. jockey in there and race them. Outside of video coverage, the spectator angle will be all but moot.

Can It Be Done?

I love anything that flies and find Alauda’s engineering interesting. But how’s this supposed to work in the real world? They used to have air races back between the Wars, but they eventually died out. The outbreak of WWII finished them off, but they were fading before that, in large part because the crowds in the stands couldn’t see what was going on. The Reno Air Races exist today mainly as a novelty and mainly for the participants. The Airspeeder looks interesting, but how are you going to sell tickets to something you can’t even see?

Indeed, only time will tell. This remotely-piloted Airspeeder Mk3 is in its final iteration. The manned racing craft, the Airspeeder Mk4, is due next year. Meanwhile, the Airspeeder Mk3 racing series will be announced in the coming months. Final behind-closed-doors pre-season tests will happen in Australia before the start of an international racing calendar.