A Reliable 1965 Austin-Healey Sprite For Sale 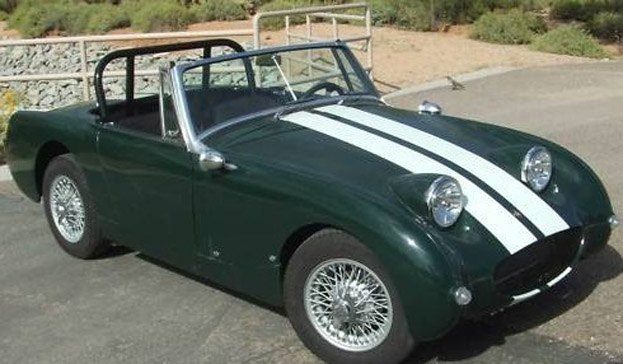 Ah, the bug-eyed Sprite. They are fun little cars, and I’ve spent more than my fair share around them. Tiny, great handling weighing next to nothing, they sort of set the bench mark for just how small you could make a sports car. Shoot, the first series didn’t even have trunk lids. You had to stow what cargo you were foolish enough to bring along via sliding the seats forward and passing things into the rear-most compartment. And was that the same location for that secondary fuse box? Or am I thinking of some other great British sports car with a horridly notional idea of “reliability”?

Ah well, who knows. But I know one thing that can make a 1960’s vintage Austin-Healey Sprite reliable: Swap out the Johnson era drive train for that of a Mazda Miata. Sadly, I only have a one car garage (I know, I know), but tell me this little guy isn’t all the more tempting now.

What we have here, courtesy of Hemmings (home to many my Lotto winning fantasies) is a rather nice 1965 Austin-Healey Sprite, whose owner swapped in a turbocharged 1.6-liter engine and five-speed transmission from a Miata. Nice choices. The 1.6s rev a little better than the 1.8s, and turbocharging it … what, do I have to explain that part to you? Very reasonable, actually. Getting an OK type A Miata is going to run you around 4 or 5 thousand (depending on your local). Going through the engine and rebuilding what will be necessary will probably run you another 2 or 3 grand (assuming it’s not perfect already). And add another 2 or 3 grand for the turbo, brakes kits, and such, and you’re pushing pretty near to what this fellow is already asking.

Ah … only a one car garage.