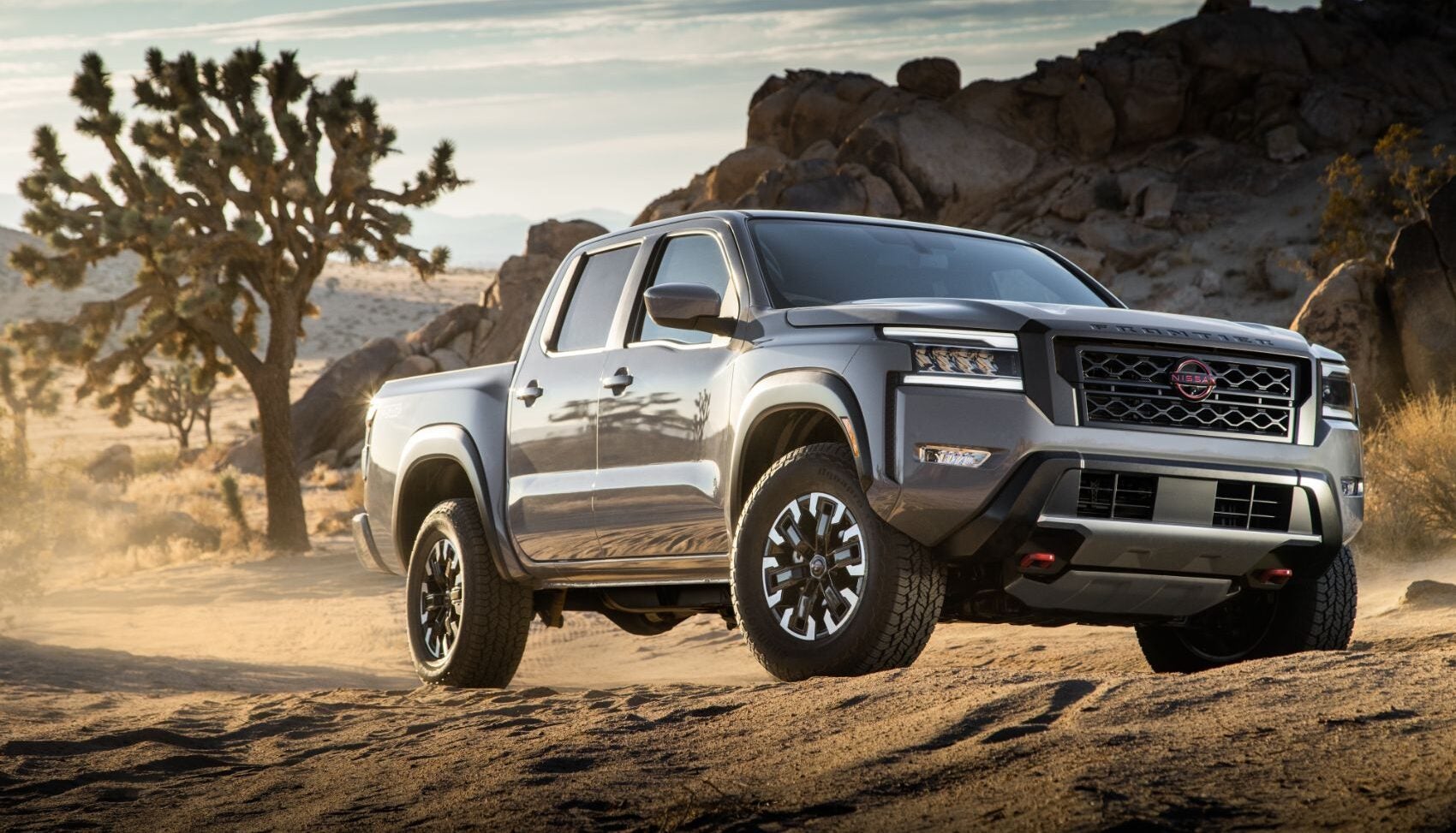 The 2022 Nissan Frontier is a versatile truck – and I don’t mean just in terms of 4×4 capability and cargo organization (although it is versatile in that sense), but more so in its styling. On the one hand, Hollywood could jump on the 2022 Frontier, especially with that front end. It’s a Judge Dredd rolling through a Mega-City One kind of truck or something that transports the Jaeger pilots to their Mechas in the next installment of Pacific Rim. On the other hand, it reminds me of the Nissan “Hardbody” rigs in the 90s, some of the most incredible little work trucks of all time.

The most obvious criticism is how the Frontier stayed relatively neutral when the mid-size truck boom kicked off again in the 2015 and 2016 timeframe. GM dropped the Colorado and Canyon, and Toyota jumped in with a new Tacoma. Around the same time, the redesigned Honda Ridgeline showed us how a capable 4×4 didn’t have to adhere to some of the typical truck norms. For example, the Ridgeline was a uni-body versus a body-on-frame construction and employed a torque vectoring system over a standard 4×4 system.

Not be outdone, Ford, although quite late to the party by this point, blew the Ranger horn in our face as if we were a young Indiana Jones hearing the announcement that the sheriff has just arrived (7:08 in that video, Ford comes waltzing in with the Ranger, and the rest of the world is River Phoenix).

Yet through all of this change in the mid-size truck market, the Nissan Frontier didn’t pivot all that much (but nor did it disappear like the Ranger and Colorado from the U.S. market). While there was finally an engine update in 2020, much of the automotive press was more interested in what 2021 would hold for the Nissan Frontier. Interesting is how long the Frontier has stretched out its generations, namely only two of them. The first-generation Frontier arrived in 1997 and lasted until 2004. The second generation appeared in 2005 and went all the way until 2020.

That said, here is what we can expect from the 2022 Nissan Frontier as the mid-size truck enters its third generation.

Part contemporary, part throwback in its design, the 2022 Frontier has one of the best-looking front ends in the business. Despite being a mid-size truck, the front grille, fenders, and hood appear both massive and rugged. Overall, Nissan’s designers went for a machined, athletic, and structural look, especially at the rear, where the fenders combine with the bumpers in a way that finishes the new silhouette of the 2022 Frontier.

Under the hood is the 3.8-liter V6 that appeared in 2020 for the Frontier. Complete with direct injection, the engine produces 310 horsepower and 281 lb-ft. of torque. Married to the V6 is a nine-speed automatic, which Nissan spent considerable time refining. The nine-speed transmission includes a new electro-hydraulic system, a long input shaft, and a 99 percent wider gear range. Drivers should see considerable improvement here versus the outgoing Frontier’s five-speed transmission.

Every Frontier 4WD model employs a shift-on-the-fly system. An electronically-controlled transfer case allows for three different modes: 2WD, 4HI, and 4LO. Frontier 4WD models can be optioned with Nissan’s 4-wheel limited-slip system, which sends power to the wheels with the most grip on low traction surfaces. Hill Start Assist is standard on all models, and Hill Descent Control is standard on all 4WD models.

The PRO-4X trim level kicks things up a notch with an electronic locking differential, Bilstein off-road shocks, and underbody skid plates. Even on the styling front, the PRO-4X delivers with LED headlamps, LED Daytime Running Lights, LED fog lights, and Lava Red grille accents. Although the PRO-4X will run more money, it’s worth it if you like a rugged truck with a few extra “bells and whistles.”

Hauling cargo and gear should be a breeze with the 2022 Nissan Frontier. Opt for the High-Utility Bed and receive a factory spray-on liner and the Utili-track Channel System, which includes three special “C” cross-section rails mounted in the bed. Drivers also have four fixed bed tie-down hooks to help secure bulky items. Among the nice extras are the available LED cargo bed lights and the dampened tailgate assist feature.

A fully-boxed ladder frame supports the 2022 Nissan Frontier and ensures it can handle the powertrain attributes listed above. While the new Frontier is rugged, Nissan’s engineers also focused on comfort and made tweaks to the suspension and steering accordingly.

The initial photos released by Nissan of the 2022 Frontier are of the PRO-4X trim. The red-orange accents are a nice touch for sure! In addition to style, Nissan says storage was at the top of the list when it came to the interior. According to Nissan, the new Frontier offers four liters of center console storage – almost double that of most mid-size pickups – as well as 5.7 liters of rear-door-pocket storage and 6.5 liters of front-door-pocket storage.

A nine-inch touchscreen, wireless smartphone charging, and NissanConnect with a WiFi Hotspot are all available. Apple CarPlay and Android Auto, two front USB ports (one Type-A, one Type-C), two front 12V outlets, and Siri Eyes Free are standard across the board. A Fender Premium Audio system with nine speakers (a must-have) is available for the SV, PRO-X, and PRO-4X trim levels.

The 2022 Nissan Frontier has multiple options for trim levels, cab configurations, drivetrains, and bed lengths. Here is how everything breaks down:

Every Frontier comes with a three-year, 36,000-mile bumper-to-bumper warranty and five years, 60,000 miles worth of powertrain coverage. Depending on how much you plan to drive your Frontier, a Nissan extended warranty might be of benefit to you.

Below are the starting MSRP figures for the 2022 Nissan Frontier. The figures below include the destination and handling charge of $1,175. If you are in the market for a new Frontier, this free and easy search tool* will show you which dealers in your area are offering the best price.

*Although always free to you, Automoblog and its partners may earn a commission when you use this link.