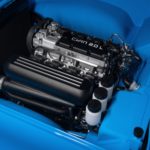 The Volvo P1800 Cyan is a merger of classic Volvo design and modern racing technology. First seen in 1961 as a 2+2 front-engine, rear-wheel drive GT sports car, the Volvo P1800 is best known as Simon Templar’s (played by Roger Moore) vehicle of choice in the hit TV series The Saint, a show which aired in the United Kingdom on ITV from 1962 to 1969.

It so happens Volvo is celebrating the 60th anniversary of the P1800 in 2021, and what better way to commemorate such an event than by reviving the P1800 as a restomod, right? Since reviving, restoring, and converting vintage cars is big business these days, Volvo wanted a classic-modern car to call its own. Volvo went to Cyan Racing for the project, the reigning triple World Touring Car Champions and creator of the Swedish carmaker’s first world title-winning Volvo race car.

“Our company was founded in 1996 to race Volvo cars in Sweden,” said Christian Dahl, CEO and founder of Cyan Racing. “The first world title was a milestone for us, and we felt it was a good time to reconnect with the past and to those before us racing Volvos. Thus, the first Volvo P1800 Cyan is a tribute to Volvo motorsport, and the first car carries our blue and yellow racing colors to mark our heritage.”

Unbeknownst to many, Cyan Racing established the Polestar brand in 2009. Yes, we’re talking about Volvo’s (and parent company Geely’s) current all-electric subsidiary of hybrid and electric vehicles. Volvo bought the Polestar brand in 2015 and won its first world title two years later with the S60 TC1, a racing car of which was prepped together with – you guessed it – Cyan Racing.

The Volvo P1800 Cyan started life as a 1964 P1800 coupe. It may not seem evident at first sight, but the P1800 Cyan has a wider track to accommodate larger 18-inch center-locking forged alloy wheels. The P1800 Cyan has a slightly shorter wheelbase and is generally a bit shorter than the vintage model, but it’s wider, taller, and sits lower to the ground.

Like the old car, the P1800 Cyan has no ABS, stability control, or brake booster. Although we prefer our cars to have the latter, having no ABS or ESC is nothing but good news to seasoned enthusiasts. Underneath is a carbon fiber reinforced chassis with high-strength steel for load-bearing components. The original live rear axle was axed to make room for a Cyan-designed independent double-wishbone rear suspension with aluminum arms. Meanwhile, all four corners are suspended by two-way adjustable dampers with Cyan hydraulics.

The original Volvo P1800 came with either a 1.8-liter or 2.0-liter inline four-cylinder engine with up to 118 horsepower. The P1800 Cyan receives a similar 2.0-liter four-banger from the world title-winning Volvo S60 TC1. Equipped with a Borg Warner EFR turbocharger, the P1800 Cyan has 420 horsepower and 336 lb-ft. of torque at its disposal. Power is sent to the rear wheels via a bespoke Hollinger five-speed manual gearbox with a carbon-fiber propeller shaft and a torque-biasing limited-slip differential.

Tipping the scales at no more than 2,182 lbs. (990 kg) and with the engine spinning at a maximum 7,700 rpm, the Volvo P1800 Cyan is sure to be a hoot to drive. “The engine is designed for high revs, with the torque intuitively linear to the pedal,” said Mattias Evensson, Project Manager and Head of Engineering at Cyan Racing. “We have learned from racing where the drivers want perfect control of the torque, increasing precision and driving pleasure at the same time.”

Thankfully, the Volvo P1800 Cyan’s interior is devoid of bothersome and fiddly touchscreens. Instead, you get a simple dashboard, a vintage Momo steering wheel, and a conventional floor-mounted stick. Modern touches include custom digital analog-look instruments, racing seats, racing harnesses, and a leather-wrapped titanium roll hoop. The latter is a nice safety feature given the car has 420 horsepower with zero ABS and stability control.

We have no official word on pricing, availability, or if the P1800 Cyan is street legal, for that matter. Base prices are said to start upwards of $500,000 given it’s a limited-edition model. Cyan Racing recommends contacting them directly for more information on pricing and individual specification.