Now that the dust has cleared, and we’re getting to the point where the 2020 Chevy Corvette is ready to hit the market, what do we know? We know people from a surprisingly wide swath of the car world are singing its praises. Perhaps this is premature and time will tell? We also can, at the very least, speculate on what must be happening in the marketing and planning departments at places like Porsche and BMW and . . . oh yeah, Toyota.

I almost forgot about them.

The Vette Versus The East Coast

This all started with a phone conversation with my brother. He’s a certified, dyed-in-the-wool gearhead. Owner-past and present of many sports cars. Still owner of many AutoX trophies. Possessor of an uncanny amount of mechanical sympathy. He was, also briefly, an owner of a 1965 Corvette. And when I say briefly, I mean less than a month. Turns out, parking a nearly-new Vette on the street in Boston, circa 1971 is a bad idea. One morning, he found its vent window smashed. Being the bright young spark he is, he took matters into his own hands.

Before parking it that night, he pulled the distributor rotor and chained the clutch pedal taught to the steering wheel spoke. The next morning he came out to find an oil stain where is Corvette used to be. The determination of thieves in Boston is still something to never underestimate.

The Supra Comes Up

So, he’s a good guy to talk with about cars in general and Corvettes in particular. I was running down the numbers for the 2020 Vette, and at the end he cut me off.

“Yup,” says I, referring to the starting MSRP of the 2020 Corvette Stingray.

“Less than a Cayman or a Boxster. Shit, that’s only 10 grand more than a new Supra!”

I had forgotten about the new Supra until my brother brought it up. The vaunted collaboration between Toyota and BMW on the rebirth of the immortal/beloved Supra has been the hot topic in the car world for a while now. Or it was until the new Vette showed its face. And I bet it’ll be more than ink and Twitter mentions that Toyota will be losing in the days to come. Yeah, the Supra is cheaper by about 10 grand, but it’s also off to the tune of 170 horsepower compared to the 2020 Corvette Stingray. Another indication how the new Corvette seriously upset the game board with its relatively low starting MSRP.

Related: Engineering the everyday supercar: an in-depth look at the 2020 Corvette.

At this point, the 2020 Chevy Corvette will have to be seriously wonky to drive; or put together by epileptic monkeys not to work. But I doubt either of those things are true. Where will this leave us? That’s the big question. Up until now, it was easy to dismiss the Vette. Oh sure, the C7 is a very, very potent machine. Yet it still relies on an old school layout and an even older school clientele. Porsche snobs (or whoever) are still looking the other way.

But now? Now, maybe not so much. Or at the very least, in a couple of years, you will have to consider a C8 Corvette. And we are only talking the 2020 Stingray here – we haven’t even considered what the higher-level variants (like a ZR1) would bring.

Overlooking it would be an act of willful omission. It will show your prejudices all too clearly. Sure, you could potentially ding it for its brutal performance and power delivery; (maybe – and that’s a big maybe that assumes Chevy dropped the ball on trimming the thing out (but they won’t)). Maybe you can ding it for its over-the-top style and lack of subtly, but that has always been Corvette’s M.O. over the years anyway.

Which brings me back to my brother. He once said, many years ago, the worst thing about owning a Corvette is how you’re the guy that drives a Corvette. Meaning, I don’t want to elaborate on how there’s a vibe and aura that goes with guys (and it’s always guys) that drive Corvettes. You tell someone, “My friend drives a Corvette,” and you can see it in their eyes. You know they are forming this mental image of a guy with a slimy rayon shirt; unbuttoned one-too-many buttons; gold chains (plural); Ron Jeremy facial hair, and an unconscionable taste for Nagel prints.

This is unfortunate and largely unfounded. Literally all but one Vette guy I’ve known are super nice. My brother is a super nice guy. All Vette owners kind of shrug and wince when this subject comes up. Most Vette guys are as unassuming as they come.

Related: The C8 has the right drivetrain, right where it should be.

2020 Chevy Corvette: A Conundrum of Sorts

But what about us? What about people like me (and possibly yourself) that would probably prefer a Porsche or something along those lines? Will we now be obligated to consider a Corvette? Look, none of us would seriously consider buying something like a Geely; but what if the Chinese automaker had something on par with a LaFerrari or McLaren P1, or a Porsche 918. And what if they sold it for $200,000?

You’d have to think about it, wouldn’t you? You’d be staggeringly-stupid if you didn’t. And that, more or less, is the conundrum a huge swath of gearheads will soon find themselves in. I have heard this sentence a lot these past few weeks: “Y’know, I’m not much of a Corvette guy, but . . . ” 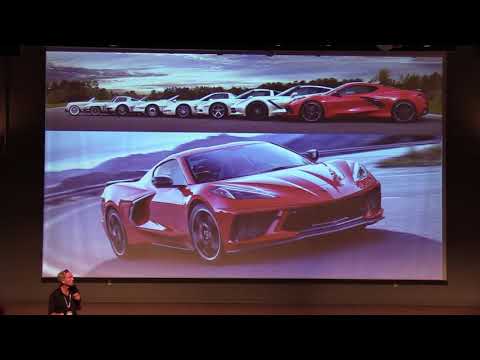 Production of the 2020 Chevy Corvette Stingray begins at Bowling Green Assembly later this year. Additional pricing and packaging information will be available closer to launch. When it hits the market, the new Stingray will come in 12 exterior colors, with six interior color themes and two optional stitching packages. If you simply cannot wait, a new digital tool, the Corvette Visualizer, lets you design your dream mid-engine Vette in vivid detail.