You know Jason Torchinsky, right? Semi-professional goofball; automotive writer that came to prominence working at Jalopnik (the kid brother of the automotive press) that has a penchant for doing things like racing ice cream trucks and Goggomobiles, and stuffing big engines where they don’t belong. Yeah, him. That Jason Torchinsky. Well, Torch (as he’s affectionately known) wrote a new book called Robot, Take The Wheel and this is some very heavy stuff.

Table of Contents show
The Lost Art of Driving
Down With The Ship
Throw Us A Line
A Slight Digression
There Are No Wrong Notes
Dissonance & Resolve
Better Strap In
Robot, Take The Wheel by Jason Torchinsky
About The Author

The Lost Art of Driving

Robot, Take The Wheel is an entertaining yet serious examination of what automation is and how it applies to our favorite pastime: driving. Subtitled “The road to autonomous cars and the lost art of driving,” Torchinsky’s book takes a surprisingly thorough look at, for lack of a better way to put it, how we got here. The book is part history lesson and part extrapolation of what we, the gearheads, now face, or will face in the days ahead.

In a way, it’s all caught up in the last half of the subtitle: “the lost art of driving.” We – you, me, all of us grease-stained, busted-knuckle gearheads out there – actually like driving. We enjoy it. We actually look forward to getting out on a good stretch of road, or even a mediocre stretch, and driving a car. What Torchinsky realizes, and what I realize, and what a growing number of you realize is how there are a fair number of people that don’t like driving. As a matter of fact, they positively dislike it.

Down With The Ship

I remember, not that long ago, seeing a press conference with some Google execs about their then-new autonomous car program. One of them, Brin or someone, I don’t recall who, said, “Seriously: Who actually enjoys driving a car?” He said this from a spot within 20 minutes of some of the best driving roads in the world. I knew if I could get this idiot into a real car and have him drive up the PCH or Sand Hill Road to La Honda or wherever, he would get the point. I hoped.

But I secretly knew he wouldn’t. He was serious. I knew, right then and there, we gearheads were sunk.

There are more people today that see cars as mere appliances, as devices that get us from Point A to Point B. And if that can be done with less user involvement, then that sounds okay to them. I never had to worry about those people, but now I do, because there’s a bunch of them with more money than Croesus; not to mention, how tech bros today have this unquenchable desire to fix something that isn’t broken.

This is the problem Torchinsky faces head-on and rather unblinkingly. He traces the early beginnings into what can loosely be called autonomous driving in parallel with the development of the automobile itself. Torch’s book is not a weighty tome, clocking in at 244 pages (including notes) and it moves right along. It’s nicely-equipped with illustrations and the occasional graph and such for visual aids.

Throw Us A Line

By the time he gets to the tenth and final chapter (accurately titled “Save The Gearheads“), Torch has laid out a lot. We know where we are, we know how we got here, and we have a pretty good idea what’s in store. Chapter 10 is an impassioned plea for our automate future to hopefully, please – we’re begging you – have an “off” switch. This is where Torch and I are in complete agreement. I have no real problem with driving aids, safety features, safety nannies, and even full-on autonomous driving, just so long as there’s a way to turn it off.

I don’t, and near as I can tell Torch is with me on this, have any problem with autonomous cars. Just don’t force us to buy them and use them. Imagine something like a Lotus Elise from 2035 that won’t let you turn off all the driving aids, safety features, and such. What’s the point of owning a Lotus? Torchinsky does, thankfully, suggest a way to have our cake and eat it too. He even throws in a few fun drawings to show car companies how it’s possible.

It might not seem obvious to people like the Google guys, but there are, indeed, those of us that enjoy – and I mean really enjoy – driving. The more basic and raw and exposed the better. Look, I’m not a total Luddite. As a matter of fact, I think I am more forward-leaning than Torchinsky is. He recently wrote about someone who took the semi-automatic gearbox out of their Ferrari F430 Scuderia and put in a manual. I can’t agree with him on that. I don’t feel manuals “make me more involved” with the car, especially a F430 Scuderia.

I’ve driven those, with the semi-automatic gear box, and ‘bang-bang-bang,’ they shift quicker than you can literally blink. I can tell you brother, I was plenty involved. However, my Miata has a manual five-speed (the best gear change you can get outside of a manual Ferrari, ironically) and I wouldn’t have it any other way.

This is what Torchinsky realizes, and more or less gets across in Robot, Take The Wheel. He realizes that for us gearheads, driving is a personal choice and an activity we enjoy. That simply getting to where we are going is, for us, very much beside the point 90 percent of the time. And sadly, that’s all tech bros and automation engineers see: The end result. “People want to just get to Point B, how can we get them there faster and more efficiently?” What if that’s not exactly what we want?

There Are No Wrong Notes

Robot, Take The Wheel reminds me of when I was at a tech conference dinner party in Seattle years ago. The party was a way for those well-connected enough to be shown some extra-special products, games, software, and such. I was walking by a laptop displayed next to some sort of kluged-together piano keyboard.

“Hey man, do you like music?” asked this smarmy-looking marketing guy.

“Then check this out,” he said, cutting me off and cranking up the keyboard. “Our new software can tell what you want to play, and play it for you, even if you hit the wrong key. No wrong notes!” he said triumphantly, hitting their marketing tagline.

I hit the switch and mashed the flat of my hand onto the keys. The blare of dissonance brought the conversation to a halt. I changed the block of keys into a C Major triad, to an F major, to a G major, and then started running up the keyboard, stopping just sort of a resolution and playing “between the keys” as my old jazz band teacher would say.

I did that two more times: dissonance, resolve, dissonance, resolve. Looking right at the guy, I said again, “There are no wrong notes.” He looked confused and the other people on his team realized I pointed out a huge flaw in their machine.

I bet we would see that same look on an autonomous driving engineer’s face if Torch and I were to take him to The Indy 500 and say, “That’s driving, pal.”

Torchinsky gets it, because we get it. I hope somebody with money and pull and a voice in the decision-making process reads Robot, Take The Wheel. Reads it and takes it to heart. Or the future is going to be efficiently boring. 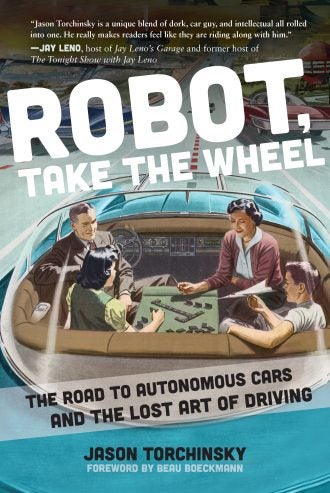 Jason Torchinsky is the Senior Editor of Jalopnik, a cutting-edge news and opinion website about cars and technology. He has written for a wealth of other publications and is a producer of Jay Leno’s Garage, which he’s guest starred on. “Torch” is also the star of his own show, Jason Drives, which features him driving obscure cars for his millions of fans on social media. Torchinsky is also a stand-up comedian and an artist whose work has been exhibited around the world. He lives in Chapel Hill, North Carolina.