The 2020 Mercedes-Benz GLB 250 is a mid-sized, no, wait, scratch that it’s a . . . wait, how big is this thing? It looks like a mid-sized crossover, and the specs say it’s not all that big, but somehow Mercedes fits seven seats in this thing with an optional third row. What sort of sorcery is this?

It’s not, really. Just smart packaging by an office full of German engineers. It’s also a pretty good answer if you live in an urban environment, have a family, and also have the cash to drop on something with a three-pointed star on it. They don’t say how much yet, but Merc doesn’t make anything cheap. So figure that in before you decide it’s the car for you.

Or truck. Or truck-like thing.

How Big Is The Mercedes-Benz GLB?

Whatever the GLB is, it’s 111.4 inches long. Which means it’s 5.1 inches longer than the GLA and 1.7 inches shorter than the GLC. Get it? A, B and C. GLA, GLB, and GLC. Right in the Goldilocks zone, or at least the guys in sales hope it is. The headroom up front is 41 inches, and legroom in the back row is 38 inches, meaning the GLB is a comfortable ride for everyone on board (at least the guys in sales say so).

In addition to hauling seven people, the GLB also hauls things. The cargo capacity is between 20 to 62 cubic feet, depending on the model, and whether the seats are all up, all down, or split somewhere between. So family ski trips or camping trips should be handled with ease. Mercedes also points out how the second row backrests can be adjusted in several stages for flexibility, ultimately increasing cargo volume by up to six cubic feet.

Handy if the kids get an extra big haul from granny one Christmas future.

The drivetrain has all the bells and whistles you’d expect from this car company in 2019. It’s powered by a two-liter four-banger that puts out respectable amounts of torque and power – 221 ponies and 258 lb-ft. of grunt – being mated to a silky smooth eight-speed automatic. The two-liter M 260 engine (as it’s known in Mercedes parlance) has cast-iron cylinder liners and a die cast aluminum block. Mercedes says their in-house cylinder bore process, called “trumpet-honing,” minimizes piston friction and cuts consumption.

But really, if you’re thinking of seriously owning the 2020 Mercedes-Benz GLB 250, lap times are not your first priority. Besides, I’ll bet you a beer that an AMG version will be out in about a year or two and then we can talk about lap times.

No, what you (and your passengers) are going to be most interested in is the infotainment and other tech-wizardry. And of course, there is a metric ton of it, but unfortunately, it’s called MBUX. That stands for Mercedes-Benz User Experience, which just goes to show you when the Japanese come up with a ludicrous name for something, the Germans will say “Halte mein Bier.” Any guy that willfully uses the term MBUX is the same guy that wears socks with his sandals.

Don’t be that guy.

Essentially, it works like this: Anything even remotely connected with infotainment goes through an on-board powerful computer system that then displays relevant info, via screens and graphics. All displays can be customized to your individual needs. There’s a full-color, heads-up display for navigation and augmented reality for the driver. An Alexa-like voice control system activates with a jaunty “Hey Mercedes.”

No word about whether this works for those of you that name their cars. So if you say something like “Hey Bob, show me the route to mom’s place,” I cannot guarantee it will respond.

There are a bunch of driver-assist and safety systems for the Mercedes-Benz GLB. Mercedes says the new GLB has the same “cooperative support for the driver and functionality from the S-Class.” No, I don’t know exactly either, but I take that to mean the GLB has a lot of the same stuff found on the flagship S-Class. For example, the GLB has improved camera and radar systems that can look up to 1,641 feet ahead, and can drive partially autonomously in certain situations. Thanks!

The GLB can alter its speed before corners, crossroads or roundabouts using the Active Distance Assist DISTRONIC system. It references on-board maps and navigation data in addition to what the sensors are telling it. There’s also Active Steering Assist, a new feature, along with Active Lane Change Assist, Active Parking Assist with PARKTRONIC, and some unnamed gizmo that allows the GLB to automatically restart in traffic jams. 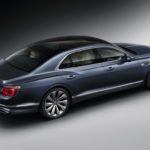