The 2019 Chevrolet Corvette ZR1 arrives this spring, and fans will likely be jazzed at the latest news concerning the bowtie’s pinnacle performance car. The 2019 ZR1 recently scored a record lap time on the 4.1-mile Grand Course West at Virginia International Raceway with a time of 2:37.25.

Icing On The Cake

The record lap at VIR was set last month during routine validation and performance testing. The stock ZR1 was configured per the standard track and aerodynamic settings recommended by the owner’s manual. The ZR1 was finalizing its 24 hours of at-limit track testing, with multiple GM Performance engineers logging laps, including vehicle dynamics engineer Jim Mero who set the record.

“The track had been empty since mid-December, so it was a bit slow when we started, but the conditions turned pretty quick at the end,” explained Alex MacDonald, Manager, Chevrolet Vehicle Performance. “On the heels of announcing our Z06 time of 2:39.77, the ZR1 lap time is the icing on the cake.”

The ZR1’s LT5 6.2L supercharged V8 is the most powerful production Chevy engine yet, complete with 755 horsepower and 715 lb-ft. of torque. The engine also features GM’s first application of a dual-fuel-injection system, which includes direct injection (primary) and port injection (secondary). The engine is paired to either a seven-speed manual or an eight-speed automatic transmission. The latter was equipped to the record-setting ZR1 at VIR.

The new ZR1 features a larger, 2.65-liter supercharger that generates more boost but spins slightly slower when compared to the LT4 engine of the prior generation. This reduces heat and parasitic loss while lowering air intake temperatures for better performance. There are 13 radiators total, four of which are new to facilitate cooling between the engine oil, transmission, and differential.

“On the racetrack, the ZR1 can compete with any supercar – at any price,” Reuss said.

“It’s not too often you set a lap record during validation testing,” MacDonald added. 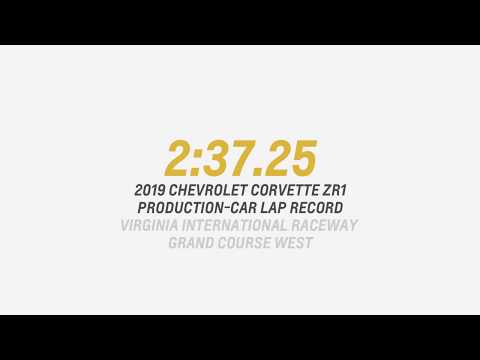