Volkswagen has moved into the three-row family vehicle category with its all-new Atlas SUV. It offers a spacious cabin, V6 power, room for seven passengers, and an R-Line appearance package setting it apart from the standard model.

This weekend, we drove the near top-of-the-lineup, 2018 Volkswagen Atlas V6 SEL with the R-Line trim.

The Volkswagen Atlas is entirely new for 2018 as a midsize, three-row crossover aimed at families. Built in Tennessee, alongside the Passat, the Atlas focuses on the American market, competing with the Ford Explorer, Honda Pilot, Toyota Highlander, and new Subaru Ascent. 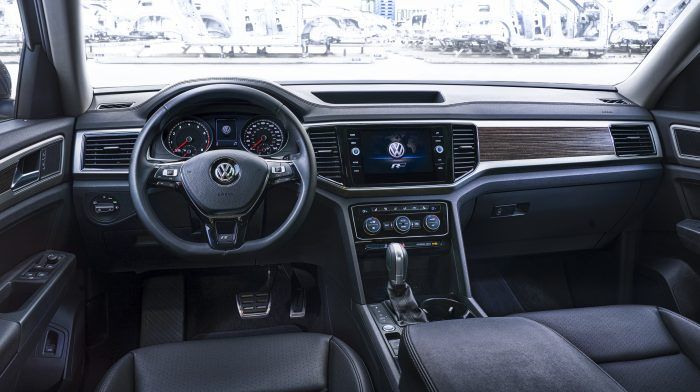 The cabin of the new Atlas is spacious up front with lots of leg and headroom for drivers and passengers. The all-black leatherette interior is in sharp contrast to the all-white exterior of this three-row SUV. The cabin design is conservative with clean lines, and was well thought out with its logical controls and easy to understand displays.

The quality of materials lags behind the competition, but there’s still enough soft-touch materials to give an up-class feeling. In the back, there’s more hard plastic, but that’s a good thing with the kids spilling things, offering easier cleanup for parents on the go.

Overall, the Atlas cabin is impressively spacious and versatile, functional and easy to use, and cargo space excels.

This Atlas tester came with the optional 3.6-liter V6 engine, generating 276 horsepower and 266 lb-ft. of torque. It’s mated with an eight-speed automatic transmission with Triptronic. This particular Atlas came with front-wheel drive, but Volkswagen’s 4Motion all-wheel drive ($1,800) is an option for V6 models.

The Stop/Start system is standard and shuts off the engine at traffic lights to save fuel and reduce emissions. EPA fuel mileage estimates come in at 18/25 city/highway and 20 combined.

While the raw numbers of the optional V6 would suggest this three-row family hauler would be underpowered, we found it to have more than enough grunt for most driving situations. The new Atlas has a composed attitude with smooth acceleration, solid stability at high speeds, a comfortable ride on the highway, and responsive handling in the corners.

On the road, the new Atlas feels lighter than expected for a vehicle of its size and weight. Even with the optional R-Line 20-inch wheels, our rear passengers over the weekend said it was a smooth, comfortable ride. Even on dirt roads, the fully independent suspension absorbed the bumps capably and confidently.

We pushed the Atlas hard around the tight mountain corners west of Denver, and it remained composed with little body lean. When pushed uphill at altitude, we found it had enough power and the eight-speed automatic wasn’t hunting for the right gear.

However, the V6 isn’t as frugal by today’s fuel efficiency standards as some of the competition, even without all-wheel drive.

The 2018 Volkswagen Atlas is especially spacious inside and offers lots of flexibility for your cargo-carrying needs. There’s room for seven passengers, and adults can even ride in the back for more than a few blocks.