2018 Jaguar F-TYPE: Anything But Dull And Boring

The 2018 Jaguar F-TYPE is anything but dull and boring, and earlier this week, that’s exactly what Jaguar was going for. The automaker launched a new campaign for the F-TYPE in the towns of Dull, Perthshire in Scotland and Boring, Oregon. Jaguar provided a new F-TYPE for two residents of Dull and two from Boring so they could zip through their respective communities in not so dull and boring ways.

Dull, with 200 residents, sits about 75 miles north of Scotland’s largest city, Glasgow. Boring, here in the United States, is about 21 miles east of Portland, Oregon. Although a bit larger than Dull at 8,000 residents, Boring’s citizens share the same passion for their home as those in Dull. They readily embrace the names, joining forces in 2012 to form a new public holiday – Dull and Boring Day – now held annually on August 9th. To mark the occasion this year, Jaguar showcased the new F-TYPE and demonstrated how each community is anything but what their name reflects.

“Bringing the F-TYPE to the cities of Dull and Boring allowed us to have a bit of fun with the brand in a way that was relatable for Jaguar consumers in the United Kingdom and the United States,” said Joe Torpey, Communications Manager, Jaguar Land Rover North America.

The 2018 Jaguar F-TYPE is powered a diverse range of engines, including a turbocharged 296 horsepower Ingenium four-cylinder, a supercharged V6, and an all-wheel drive V8. The latter is found in the F-TYPE SVR Coupe with a top speed of 200 mph. If you don’t want to go that fast, opt for the F-TYPE SVR Convertible which only hits 195 mph.

Those with an appetite for technology will appreciate the new F-TYPE. The standard Jaguar InControl Touch Pro system features faster processors and automotive Ethernet connections. The system supports a number of additional apps and driver assistance technologies. GoPro connectivity enables a new app called ReRun that sources telemetry data from the car like speed, lateral acceleration, gear selection, and throttle and brake position. Said data can be transferred to a smartphone so drivers always have a record of their track performance.

The 2018 Jaguar F-TYPE starts at $59,900 and will be available later this year. In the meantime, see how the citizens of Dull and Boring made the most of their holiday with the new F-TYPE in the video below. 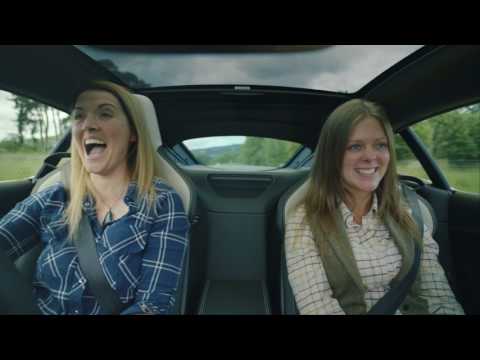