The 2018 Porsche 911 GT2 RS is the fastest and most powerful street-legal 911 ever. It recently took its introductory bows at this year’s Goodwood Festival of Speed in the UK. Before this thing even hits the road or the race track, its numbers are just staggering.

The GT2 RS is powered by a twin-turbo flat-six engine that puts out 700 horsepower and 553 lb-ft. of torque. That’s 80 horsepower and 37 lb-ft. of torque more when compared to the previous 911 GT2 RS. As with all Porsches, the engine’s the thing, and the 2018 911 GT2 RS is certainly no exception. The 3.8-liter flat six is based on the plant from the current 911 Turbo S. The GT2 RS mill gets larger turbochargers with a new design that sprays water on the intercoolers when the intake air temperature reaches a certain threshold for optimum cooling at peak loads. The new GT2 RS can accelerate from zero to 60 in 2.7 seconds, topping out at 211 miles per hour; it tips the scales at the curb at 3,241 pounds.

The exhaust system is made of lightweight titanium and weighs 15 pounds less than the system used in the 911 Turbo. The front luggage compartment lid is made from carbon fiber and the roof panel is made from magnesium.

If you want to shave another 40 pounds from the vehicle, there’s the optional Weissach package that includes magnesium wheels and even more carbon fiber. The roof and anti-roll bars are made of carbon fiber, as are the end links on both axles. If you opt for the Weissach Package, you’ll see the carbon fiber weave of the luggage compartment lid and the roof are left largely exposed. The Weissach package will cost you an additional $31,000.

The new 911 GT2 RS has grip for days, thanks to its race-bred chassis and the fact Porsche developed a rear axle steering system, plus a stability management system tuned for “spirited” driving. There are air intakes and outlets all over the place and, of course, a big honking rear wing. The air intakes on the rear quarter panel, along with other parts of the rear, are made from carbon fiber reinforced plastic.

The wheels and tires are massive with 265/35/ZR20 tires up front and 325/30/ZR21 tires out back. Stopping is accomplished via the Porsche Ceramic Composite Brakes, which are standard.

The interior of the 911 GT2 RS is a red Alcantara with black leather and carbon fiber. The Full Bucket Seats have carbon fiber reinforced backrests and offer a high level of comfort and lateral support. The GT2 RS has Porsche Communication Management, the central control unit for audio, navigation, and communication. Porsche’s Connect Plus and Track Precision app are standard. These techno goodies enable a detailed recording, display, and analysis of driving data on your smartphone.

Porsche’s Chrono Package is optional and expands the PCM functions to display, save, and evaluate lap times. The Chrono Package includes a stopwatch on the dashboard with an analog and digital display. Finally, the Porsche Track Precision app is used in conjunction with an infrared transmitter placed at the side of the track; the lap trigger receiver enables drivers to record lap times with a higher level of precision. Fancy, no?

Previous
Letter From The UK: The Glory of Speed 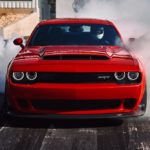