My first experience with Continental was innocently enough with tires. As a former service advisor, I sold them to customers and later, owned a vehicle equipped with a set of factory ContiProContact tires. As is often the case in my life, I see certain things a particular way until the scope is widened for me. And this was a prime example – in my world, Continental made tires, albeit very nice ones, but tires only.

My introduction to the “other sides” of Continental came innocently enough as well. In early January 2016, I was attending the North American International Auto Show for the first time here in Detroit. As I walked through the upper floors of the Cobo Center, it was obvious I was lost. I had no idea where I was going until I bumped into Brad Warner, Senior Director of Lambert, Edwards and Associates here in Detroit. He could tell I was lost so he graciously spent a few moments giving me the lay of the land at Cobo.

As we shook hands to go our separate ways, he mentioned Continental’s passive safety and automated driving round table later that afternoon. On a whim, this well-to-do man I never met invited me to what would become an enlightening academic event hosted by one of the world’s most innovative automotive companies.

Continental consists of five divisions: Tires, ContiTech, Interior, Powertrain, and Chassis and Safety. First and perhaps most common in our minds is tires. The division’s product portfolio includes tires for passenger cars, trucks, buses, industrial vehicles, and even bicycles. ContiTech specializes in rubber and plastics, and is instrumental in the early stages of automotive trends. This includes advancing such concepts as weight and complexity reduction with emphasis on functional integration across Continental’s range of products, systems, and services.

The Interior Division works under the “always on” mantra, developing what they describe as holistically connected systems. The division specializes in the flow of information between vehicle, passengers, mobile devices, and ultimately the driver. Products include multifucntion displays, infotainment setups, operating systems, radios, cockpits, software, and telematics. Over in the Powertrain Division, team members are examining how to move our vehicles more efficiently and responsibly. Product initiatives place particular emphasis on reducing emissions and fuel consumption to meet rising consumer demand in these areas.

And then the Chassis and Safety Division. This Continental squad (although I still really like tires) is my favorite. This arm of the company operates by “Vision Zero” or the idea that one day, accident-free driving will go from dream to reality.

“I absolutely think we can do it – there is no doubt in my mind we can do it,” said Amit Kapoor, Vice President, Passive Safety and Sensors, Continental Corporation. “How quickly that happens is the question I think every one of us faces.”

Continental’s Chassis and Safety Division covers a number of areas related to the modern automobile: electronics, sensors, suspension, braking, air bags, advanced driver assistance systems, and even windshield washers. The range of what the division covers is extensive but Kapoor and his team want to save lives. They get up each morning with this goal, and the understanding that current mobility trends are shuttling us directly into autonomous driving. Continental’s Chassis and Safety Division is moving with the times, and addressing the hard questions facing automated vehicles.

“From a technology perspective in a controlled case, you can do it, and there is data for that,” Kapoor said. “The question becomes what happens when you put the same vehicle outside amidst a lot of other cars which are not like it – which are not thinking autonomously.”

Another hard question is how much better an automated vehicle must be over a human counterpart. Although still a vague definition, the general consensus is a lot. In other words, if the public is going to accept autonomous driving, robot cars must be that much more exceptional, incredible, capable, proficient – insert any buzz word that comes to mind – but the point is, an autonomous car has to be rock solid.

“In the end, what we know from the past is that automated systems, like anti-lock brakes and electronic stability control, do a better job of reducing accidents than humans do,” Kapoor explained. “It is not to say human beings are not smart, but at times, there isn’t objectivity in our decisions behind the wheel because of various emotions and distractions.”

Kapoor believes automated systems will evolve, gradually becoming more precise and further defining what “a lot” means when given as an answer to how much better a driverless vehicle needs to be. It’s not a sidelines approach either. Continental’s Chassis and Safety Division is moving the ball down the field, taking an offensive approach to the defense of human life.

“We have a patent on an automated vehicle with regard to how it will react if you have a heart attack – it will immediately find the nearest hospital and take you there,” Kapoor said. “We are entering a phase where our engineers, especially our future millennial engineers, are thinking about use cases that 15 years ago I don’t think anyone would have thought about.”

The discussions concerning automated driving and the strategies for achieving it are numerous. It’s a huge topic and not to be taken lightly. As a society, as a nation, the implications are immense; if we pull it off, it would mean a significant drop in traffic fatalities, drastically improved infrastructure, and a lower carbon footprint. True, such ideas snuggle nicely with Utopian concepts, but it takes more than fuzzy feel-good attitudes to bring this better world to fruition. That’s not to say we should avoid optimism, idealism, and creativity – those things are needed greatly when confronting the challenges of automated driving – and tapping into that, and leveraging such things on an individual level will bring ideas like “Vision Zero” home.

“Our people move within the company and so they carry their experience with them when they go from chassis to powertrain, or from interior to tires. If you are thinking about what could happen in a car, you can bring a new perspective to the table somewhere else in the company based on your prior experience,” Kapoor explained. “To do automated vehicles successfully, you need all those competencies from different parts of the company. We have very talented people – nobody told me to say that – that is my personal belief.”

Kapoor, now with Continental for 16 years, explains how he makes all the sensors that go in our cars, from anti-lock brakes to electronic stability control, to any and all sorts of wheel and chassis controls. He is responsible for making sure products are launched, that existing ones are performing well in the market, and the overall business is growing. As mobility trends push toward autonomy and the discussions grow more prevalent, it’s an intense responsibility, but Kapoor and his team are not going anywhere, anytime soon. 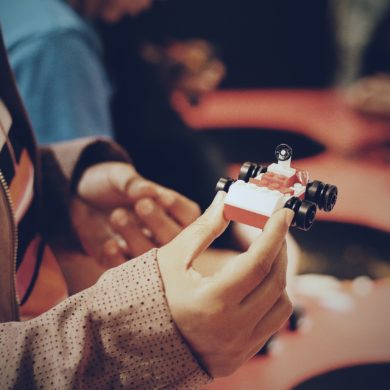