How Motor Oil Prices Have Changed Over 80 Years (Infographic)

During my time at Luxury Auto Mall of Sioux Falls, our Express Lube was a happening place. We were the only game in town with a $19.95 oil change, which included a multi-point inspection, window washing, and complete interior vacuuming. We kept a steady stream of cars during the week, with a nice peak coming on Saturday mornings.

It was, in many respects, the good old days. When we finally raised the price of our oil change, a few customers groaned but would remark “it’s a wonder you were able to keep it that low for so long anyway.”

Our friends at GMPartsCenter.net put together a really interesting chart documenting the prices of motor oil for the last 80 years. The chart shows pricing for conventional motor oil on a per quart basis, the lowest available today being $4.25. The pricing data was tracked down through public library records, while the inflation adjustment was done using Bureau of Labor data.

“When we put this data together, we were amazed to see relatively flat pricing for motor oil between 1934 and 2007,” says Matt Mylan, Parts Director, GMPartsCenter.net. “However, for reasons that aren’t obvious, the price of a quart of conventional motor oil has nearly doubled in the last decade compared to the historical average.”

The jump between 2009 and 2017 is interesting, especially since, after adjusting for inflation, prices stayed around $2 per quart for most of the last 80 years. Mylan doesn’t have a solid explanation for why motor oil costs twice as much as it did ten years ago, or why it held steady for so long.

“I have some theories – a regulatory change, perhaps – but it really is perplexing,” he said.

The chart also reveals how motor oil containers have changed over the years, from graphics and logos, to what the actual containers were made from.

“In the early days, motor oil was often sold in 5 gallon cans – these cans were sometimes made from metal, and sometimes had cardboard sides with a metal spigot,” Mylan said. “It took many decades to get to the plastic quart bottles we use today.”

During my time as a Service Advisor, we would often imagine how our dealership might be affected by changes in the automotive industry. One of our technicians used to joke about saving current oil containers, saying they could be worth something, someday to a collector. This chart from GMPartsCenter.net shows us we may want to save that empty bottle of Valvoline after all.

The chart is below with more details on the inflation and cost of oil here. 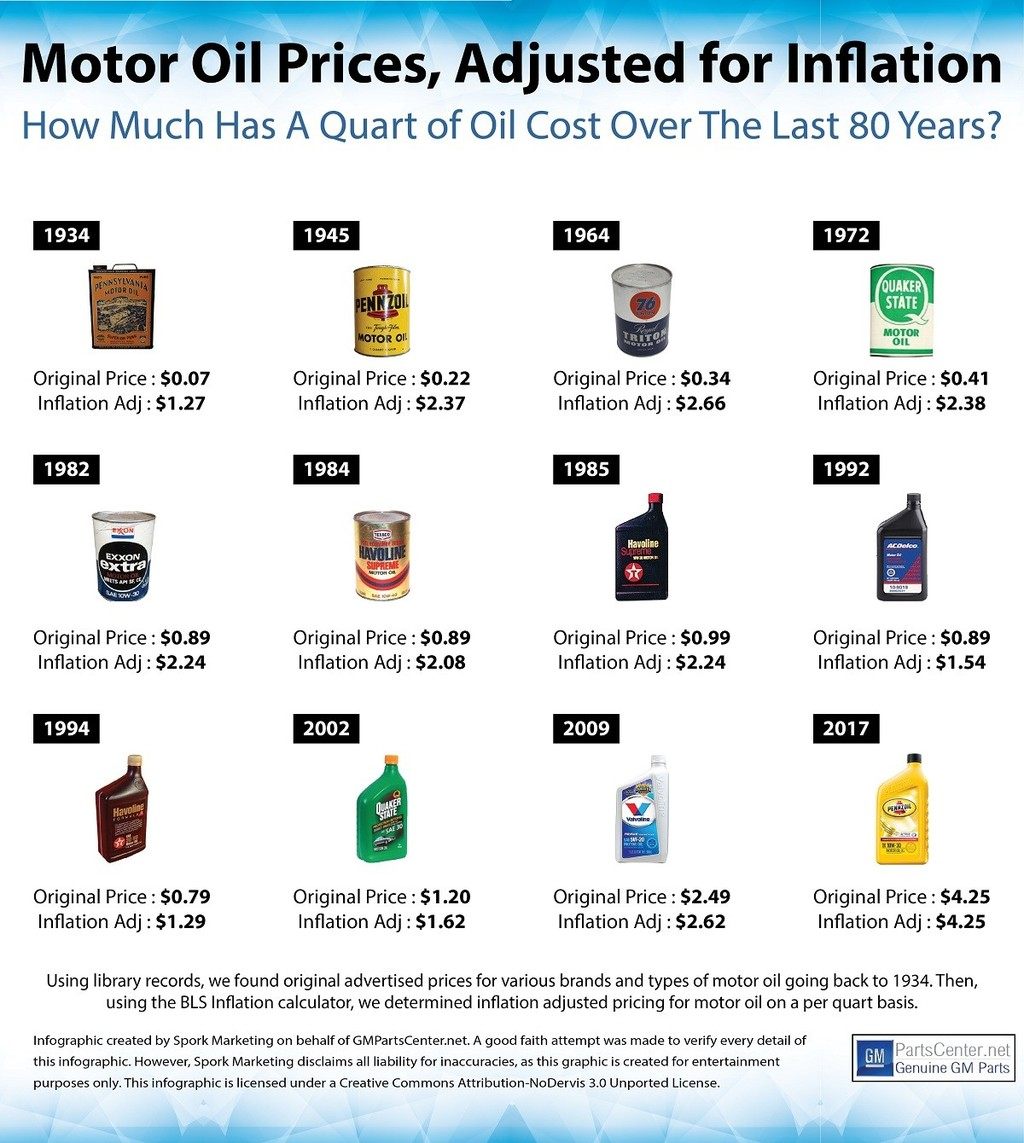