Aerodynamics are, in a word, important. They are, counter intuitively, very important in things like trucks and SUVs. Trucks and SUVs are potentially so bad to begin with aerodynamically speaking, that by tweaking them here and there, many beneficial gains can be made.

Now, yes, of course, aerodynamic efficiency is a problem for anything that plows through the air. And any vehicle can pretty much benefit from paying attention to it. But trucks and SUVs are often so bad that almost any gains here usually reap big rewards, especially when it comes to fuel efficiency.

And Chevy has, for decades now, a real bee in its bonnet about fuel efficiency. Getting really good over the highway fuel numbers is something the bow-tie brigade has been obsessing over for a while now. So as sales of SUVs rise, corporate average fuel economy falls, and that really sticks in Chevy’s craw. So to counter that, Chevy had a go at tweaking the upcoming 2018 Equinox to make it more slippery.

Or at least that was the brief that landed on the desk of the Design and Aerodynamic team working on the all-new 2018 Chevy Equinox. They had to make the compact SUV a balance of style, function, and efficiency.

To this end, Chevy crows that the 2018 Equinox offers “an EPA-estimated 32 mpg on the highway” for front-wheel drive models. Now, a few caveats and observations here: 1 – That’s the highway MPG figure; 2 – that’s for the front wheel drive models; 3 – a lot of that efficiency can be done via gearing alone. Look, you don’t have to be the reincarnation of Archimedes to know that if you put a high enough top gear in the box and get the timing so the engine can turn over correctly at freeway speed, you’re going to get amazing gas mileage.

But that’s not what Chevrolet did here. At least not all they did here.

The Design and Aerodynamic teams undertook great care in making a refined vehicle shape that still provides the main proportions of an SUV. In other words, the 2018 Equinox still looks like a big station wagon or a small half-track, depending on your taste.

Curiously, the Equinox’s overall length was cut by 4.7 inches, which should hurt aero efficiency (longer and skinnier is better at slipping through the air versus shorter and wider). Chevrolet did this more in the interests of making the Equinox easier to park and maneuver.  The Equinox team spent more than 500 hours in GM’s full-scale wind tunnel working on the exterior.

Their efforts ultimately reduced wind resistance by 10 percent over the previous model. Impressive.

They also pulled a few tricks out of the hat, such as new, electronically controlled upper and lower grille shutters to make things slicker. The shutters close in certain conditions on the highway, when less engine cooling is needed, to divert more air around the vehicle and reduce drag. There is also a larger rear spoiler that helps reduce trailing turbulence for less wind resistance.

The taillamps even incorporate a series of shrewdly integrated vortex generators for better air separation at the corners of the D-pillars. GM designers call them “air trips,” but any aerodynamicist worth their Master’s Degree will recognize them as vortex generators. There are also new air deflectors by the tires that achieve the same aerodynamic benefit as a conventional air dam, but without the risk of gronking the air dam on a curb when parking. GM says the new air deflectors are there as to not compromise the Equinox’s sculpted design, but sure, whatever, not gronking it on the curb is a better idea.

The 2018 Chevy Equinox is in dealer showrooms now. 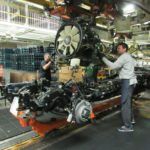 Previous
2 Millionth Duramax Rolls Off The Line In Ohio 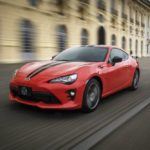 Next
Just How Special Is The 2017 Toyota 860 Special Edition?