Ah, Lincoln! Once the preferred brand of presidents (Kennedy) and mobsters (Corleone), Lincoln has slipped to being perpetually on the brink of joining Mercury in The Great Junkyard In The Sky. Once they were praised in rock songs by Charley Ryan, now they are mumbled about by Matthew McConaughey.

I like Lincolns. I like their big square style and almost anti-trend when it came to overall design. When Big American Cars were nothing but support systems for fins, Lincolns were big arched boxes with fantastically powerful engines.

Then again, I liked Mercury too, and thought the last generation Marauder was a great car, so what do I know?

And now Lincoln, still inexplicably struggling to survive, is starting to talk seriously about color and style and fashion. There are two things that come to mind: first, a lot of high-end car companies are starting to do this. Cadillac, Rolls-Royce, even Mercedes-Benz (that staid bastion of German “style”) have taken to giving a lot of ink about color choices and semi-bespoke this and that. And secondly, I think about the Inter-Society Color Council.

Have you ever noticed that one day, usually in the spring, you see lots of consumer products that are all in similar colors? Say, slate gray for example. You see cars and toasters and sheet sets and furniture that all seem to be in the identical shade of slate gray, or in hues very closely aligned to it? That is because of the Inter-Society Color Council.

The Inter-Society Color Council is an cross-industry group that meets every so often (once a year I think) and says, “okay, what are the colors for 2023 going to be?” And then they settle that question and move on. It’s not as nefarious as you think. It’s mainly a way for companies from across the industry to figure out what paints and dyes to purchase by the rail car load so they can save money.

So when Lincoln says something like, “shades of blue are popular in fashion this spring – ranging from tranquil to refreshing and included as part of a palette based on nature,” and rhapsody is the signature Lincoln Black Label theme for the 2017 Lincoln Continental; the unique monochromatic interior offers rich, layered tones of blue in a multitude of textures,” that means two things:

First, Lincoln is following the lead of Rolls-Royce, Mercedes-Benz et al. and making Fashion (with a capital “F”) a big part of what they sell, and second . . . well, about 8 years ago, a bunch of designers, color people from the Pantone Color Institute, fashionistas from Milan and Paris, design types from Silicon Valley and such were sitting around a table and said, “so . . . blue then? Blue’s gonna be it for 2017? Blue?”

And, unsurprisingly here we are when Lincoln flat out says, “versatile shades of blue, popular in spring designer collections, create the signature Black Label theme of the 2017 Lincoln Continental. Rhapsody uses a rich blend of materials to create a layered effect that complements the monochromatic tone in shades of blue. The materials are purposely arranged to flow like water: Glossier materials highlight the upper portion of the interior, while more lush touch points are lower, down to the softer, thicker carpet. Supple leather, rich Alcantara sueded cloth, mesh, and shearling combine to create an exceptionally diverse tactile experience.”

You better believe that blue is going to be a thing on upper end Lincolns for at least a year. And you’ll also start seeing lots of blues in Wal-Mart and Macy’s and such.

But why? Why make a big, public point of following fashion for an upmarket American car company? And really, you should see Lincoln’s press release on this. It reads like a community college student’s Sophomore Artist Statement: “the range of colors evokes a spectrum of emotion and feeling . . . blue . . . blue is even considered a color of protection . . . blue is an incredibly versatile shade . . . evokes feelings of warmth and security . . . ”

Seriously, the whole corporate letter is riddled with declarations like that.

My hypothesis is that Lincoln has very little choice left at this point. Look at your “average” purchaser of an upper end luxury car. They can afford to buy a new Mercedes-Benz, BMW, Jaguar, Cadillac, or whatever every year. They can afford to take into consideration both the brand and whether it’s fashionable. If all of their friends in Gstaad this past winter were just stunning (simply stunning!) in that tone of Sage Green, and they see it as an Alcantara color option when they’re taking the S-Class in for an oil change, you know they’re going to be seriously considering it when it comes lease-end, trade-in time in 4 months.

These people can afford to be fashionable with their purchases.

So if Lincoln can tap into that, if they can make the Continental not just a vehicular choice, but a fashion statement as well, then they might find a flowing money river and keep their company solvent. And, honestly, that would be just fine with me. Like I said, I like Lincolns. I like them precisely because they’re sort of the “anti-Cadillac.”

Any Lotto-winning yahoo from the trailer park can go and buy a Caddy, because Cadillac = money. It takes an effort of will and choice to say, “I’ll have what Matthew McConaughey’s driving.” 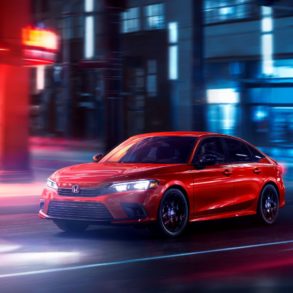