First off, that name. Yes, it’s a number, and not a name (minus points for that) but that 720 does not refer to the engine displacement. Which is kind of sad, really, cause a big, whompin’ 7.2 liter V8 in the back of this thing would have been so much fun, a la the 1960s McLaren CanAm cars.

No, the “720” is actually the power output of the thing. Yes, that’s the power output in European standards. The good ‘Murican horsepower figures are 710. Which is, and not to use too technical of a term here: a LOT!

The main figures breakdown thusly: 710 bhp at 7,500 revs and 568 lb-ft. of torque (5,500 rpm). Like I said, that’s a lot. Especially given how little this thing actually tips the scales. That would be 3,128 pounds at the curb (or 1,419 kilos for you metric types out there). Combine those hard points for the golden calculation that is power-to-weight ratio, and you don’t have to be Isaac Newton to figure out where this is going.

The architecture of the 720S is based around a new carbon fiber “tub” and upper structure, which McLaren refers to as the Monocage II. Essentially, it’s both the tub and a roll cage in one combined piece. It is extremely strong and rigid. McLaren doesn’t give specific torsional rigidity figures, but c’mon, these are the people who first used carbon fiber in a car – any car – back in their John Barnard era.

Handling, something the Brits have always excelled at, comes courtesy of McLaren’s Proactive Chassis Control, a new suspension design and McLaren’s power-assisted, electro-hydraulic steering. Grip? By the metric tonne. Balance? Like a Romanian gymnast on the uneven bars.

A interesting feature, design-wise, about the 720S is the lack of radiator intakes on the flanks of the car. They get cold air over the radiators via the unique “double-skin” aerodynamic shape of the dihedral doors. This channels air to the high-temperature heat exchangers for cooling the mid-mounted engine.

The interior is anything but Spartan. There’s yards of fine leather and lots of machined aluminum throughout the cabin. The new McLaren Driver Interface contains a Folding Driver Display and Central Infotainment Screen. The cabin offers excellent visibility, more space than you’d think, and a great deal of comfort.

You can order a new McLaren 720S now – the first customers are expected to receive their cars in May. Price? A not all that unreasonable £208,600, which is around $250,000 USD. Three grades of the car are available, with different performance and luxury trims to suit a variety of tastes. 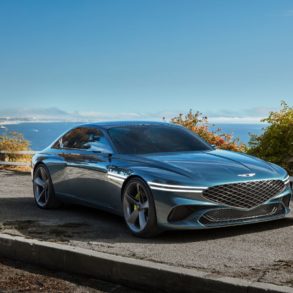