Ford Motor Company is using its Ford GT as a platform for future automotive developments in a bunch of interesting ways. This is a good thing. This is what you do with high end, halo cars: You try out cool new engineering stuff there, and then it percolates into other, more mundane company offerings.

I agree with this. This is a good strategy. Something has to make minivans more interesting, and this sounds as good of a way as any.

In this specific instance, the Ford GT has this groovy new high tech dash/display that can do all sorts of trick stuff. But haven’t we seen this all before? At its base, the Ford GT’s digital display/dash/whatever-you-call it (and we really need to come up with a common naming convention for these things, like we did for smartphones) is a reconfigurable, custom-sized, and shaped screen that goes in the instrument binnacle where the separate dials and warning lights go.

Didn’t Audi do this at Geneva a couple years back? Isn’t it on Audis now? Ferrari already does across the model range, right?

Okay, so maybe Ford is over-reaching here a bit. And when someone uses a phrase like “the dashboard of the future,” I start thinking about how we’ll all be using autogyros to commute by 1955, gyroscopes will power our briefcases by 1965, and by 1978, we’ll have affordable jetpacks. I’ll ask you again, real nice like: Where. Is. My. Jetpack?!?!?!

Anyway, what Ford has done here is rather nice and flashy cool, and it will be an overall positive, even if it’s not the first on the block.

In a nutshell, Ford is providing a state-of-the-art, 10-inch digital instrument display that structures text and graphics to help reduce driver distraction. The text and graphics can be displayed in what Ford terms as five “drive modes.” Each mode presents the info differently, prioritizing what is central for each driving situation and adapting the display to that given situation.

The five modes are Normal, Wet, Sport, Track, and V-Max. That last one, V-Max, is kind of funny, if you know about aerospace engineering, and what happens on the other side of reaching V-Max (hint: It usually ends with a smoking crater on the desert floor).

In Normal mode, the display is all business. Clean and simple. The speedometer is front and center, gear selection is on the right, fuel and temperature are top left. The tachometer displays revs in a hockey stick like shape. Compressed scale for lower rpm, thankfully, because, really, who cares about that, you want more resolution at the upper end. So 3,000-to-7,000-rpm dominates the top of the display

Wet mode seems to be little more than a color scheme. It’s the same info as in normal mode, but now Ford uses a “blue theme” and a “wet floor” concept. No, I don’t know what a “wet floor” concept is either, but Ford goes on to say that graphics under the speedometer mimic the shine of wet tarmac to “remind the driver of the mode selection.” Which, I’m guessing is another way to remind you that you’re on a wet road and you should drive accordingly, you ape.

Sport mode fiddles with what goes where a little bit. Front and center is gear selection and the speedo is shunted off to the right and less conspicuous. You’d think that revs would be front and center, but okay, gear selection. They also alter the color scheme, which is now an “aggressive orange theme and the preferred mode for most test drivers.”

Which is kind of charming.

Track mode ups things another notch, with a stark black background, highly legible text, and graphics in red. Ford says it’s easy for the eye to pick up in a fast-paced environment. Gear selection and engine speed are displayed importantly, since that stuff, is, uh, you know, important when you’re driving on a track. Other info, coolant temperature, oil pressure, oil temperature, and fuel level are in the bottom right of the display.

Also fuel is rendered as a percentage rather than miles to empty.

V-Max might as well be called Xbox/PlayStation Mode (whichever is your fave game platform, I make no judgments here (even though Forza is a better game)). V-Max is tailored to tracking maximum top speed. Large and in charge is the centered speedometer. The tach is abridged to just a line with indicator dots for “minimal distraction.” I’m not sure why Ford considers revs a distraction, but so it goes.

Coolant temperature, oil pressure, oil temperature, and turbocharger boost are over on the right, while the fuel level displays on the top left.

Ford says they will move forward from the GT’s “dash” and include the technology in future vehicles. Which, in principle, sounds like a good idea. More flexibility in these areas means more driver involvement as well as more driver connectivity. As long as Ford doesn’t screw things up and start offering lunch options for nearby restaurants while we’re on the racetrack, we should be okay. 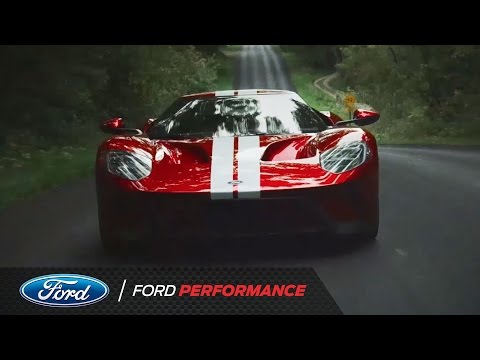