Automakers have to continually upgrade their product line or they will get left behind. This is more true in the small crossover market that’s growing faster than any other. Kia has given the 2017 Sportage a new look, a new engine, and interior upgrades. In short, it gives you another viable option in the small crossover segment but did Kia give you a vehicle that’s fun to drive? Does it offer excellent value?

The exterior gets a bold new look that may be too extreme for some, but it might be just what draws others to the new crossover. The front features new LED foglight clusters and headlights perched high on the hood. The rear also gets a redesign aimed to look like its European rivals. It’s new exterior design is more distinctive than any others in its class.

The new Sportage looks more up class and comes with higher-quality materials, new trim, and plenty of soft touch materials throughout the cabin. It gets new technology like wireless phone charging and the electronics are easy to use. Everything inside seems to be updated and the panoramic sunroof is even wider.

We didn’t have to hunt for the heated steering wheel button which was a nice change over many more expensive models. It’s also easy to find the perfect driving position with power adjustments for the front seats. Visibility is improved with new pillars and there’s a suite of new safety features that warned us this week of impending danger while driving in heavy traffic.

The 2017 Sportage is 1.6 inches longer than the outgoing model, which gave our passengers more rear legroom and more headroom as we traveled around the city. A lowered second-row floor also made for easier entry and exit. There’s more cargo room for carrying additional sports equipment and gear for recreation. Cargo room behind the rear seats increases to nearly 31 cubic feet.

We liked the one-touch power tailgate, and it can be reached easily by shorter people.

Our Sportage tester was powered by the 2.0-liter turbocharged four cylinder engine. It produces 241 horsepower and 260 lb-ft of torque. It’s down on power slightly from the previous engine, most likely to get better fuel economy. It comes mated to a six-speed automatic transmission. EPA fuel estimates on the FWD model are 21/26 city/highway and 23 combined mpg.

We didn’t get anywhere near those figures this week driving at altitude.

The 2017 Sportage tester we drove was front-drive, but all-wheel-drive is an option. We could have used AWD this week with a spring snow storm that hit the Denver area. The front-drive car slipped on the snow and AWD is a must for those that live in cold climates.

We liked the visibility outward from the driver’s seat due to the thinner pillars inside. The 2017 Kia Sportage feels solid with its new suspension. That gave it a sportier feel on the mountain roads we were driving this week. The turbocharged engine had a bit of turbo lag but there’s plenty of power for all driving situations. Ride quality is firm for keeping the crossover flat in the corners, but on the highway, it has a comfortable ride quality.

Overall driving dynamics are sporty, yet it does have a refined ride quality.

The 2017 Kia Sportage SX FWD is one of the sportier crossovers in its class, both in driving dynamics and appearance. We believe it does offer good value for the money and would say consumers in the small crossover market should take a look. It offers superior driver engagement and utility for growing families. The newly-remodeled Sportage has a comfortable cabin and a bold exterior to top it off. 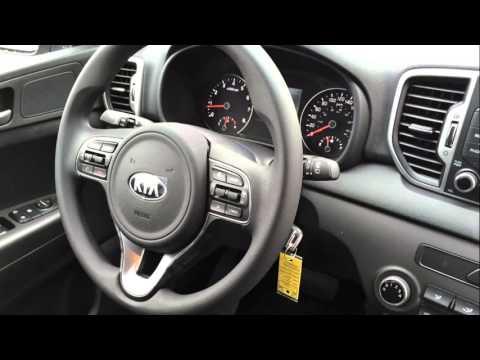