Chrysler has brought back the Pacifica badge, but this new vehicle looks a lot different than the first model with the name. Previously, Pacifica was the name assigned to their mid-size crossover that was a bit quirky. It wasn’t a wagon, it couldn’t be called an SUV, and it wasn’t really a crossover. It had a short lifespan from 2004-2008, and it’s not a vehicle Chrysler thinks of fondly.

So it’s a bit strange they re-incarnated the name and put it on an all-new vehicle.

Chrysler is known for inventing the minivan, and Pacifica is their latest version with a new twist on the family hauler. This minivan is sleek, has sliding doors on both sides, is packed with technology, and is loaded with family-friendly enhancements.

The 2017 Chrysler Pacifica is an all-new minivan. Why didn’t Chrysler call it the Town and Country? They likely wanted this new minivan to get a fresh start even though it carries a previously unsuccessful name badge. But don’t let the name fool you, this new model will likely be a hit with families.

Chrysler designed the Pacifica with families in mind. It’s got a minivan-like cabin, but with a crossover feel. It’s got a center stack and console that feels like an SUV. That’s a good thing because there’s lots of storage for things families need. It does have a dial-a-gear transmission control, but it is a space-saving feature. It comes with a big, easy-read (8.4-inch) color screen and a sensible array of switches and knobs.

And it can even be operated without getting out the owner’s manual. It’s very easy and intuitive.

The best feature of the new Pacifica has to be Chrysler’s Stow ‘n Go fold-flat second- and third-row seats. You’ll find lots of cargo and people carrying options in this vehicle. They were re-engineered to make folding them into the floor even easier than in previous versions. You can have a completely flat surface for a vast cargo hold. We think it’s the best use of space in a family vehicle as it optimizes versatility.

It’s why you buy a minivan right?

One great feature is the Stow ‘n Vac on-board vacuum cleaning system, which families will love. The system stows in the left side of the body, just behind the second-row door, and the 14-foot hose extends the length of the cabin for easy cleanup.

The power comes from Chrysler’s 3.6-liter Pentastar V6, producing 287 horsepower and 282 lb-ft. of torque. The V6 sends power to the front wheels by way of a 9-speed automatic transmission. It’s EPA-rated for 18/28 mpg city/highway and 22 combined on regular unleaded gasoline.

We won’t bore you with how the Pacifica corners in the tight mountain corners, or if there is body roll when we pushed it hard through the curves. All families really care about is how does this vehicle handle carrying people and cargo. In the city, it performs with ample power that will satisfy most families. It’s a minivan and it handles like a big vehicle, but with excellent ride quality.

It keeps out the noisy city traffic extremely well. Chrysler says the Pacifica comes with Active Noise Cancellation technology and we have to agree because the cabin is quiet. You will find this a pleasant vehicle to take on long trips, and it’s a comfortable ride on any road surface.

We would describe the Pacifica as civilized and smooth.

There’s enough power from its updated Pentastar V6 engine for most driving situations whether empty or loaded with full cargo. Fuel mileage is decent for a minivan this size with a high of 28 highway. We tested the vehicle at altitude and didn’t get anywhere near that number, but with average driving, you should get close to the mid-to upper twenties. The 9-speed automatic transmission is a smooth operator, and it puts power to the front wheels seamlessly.

The Pacifica was designed with comfort in mind and it delivers it in abundance. It will handle the large demands of families looking for a capable hauler. 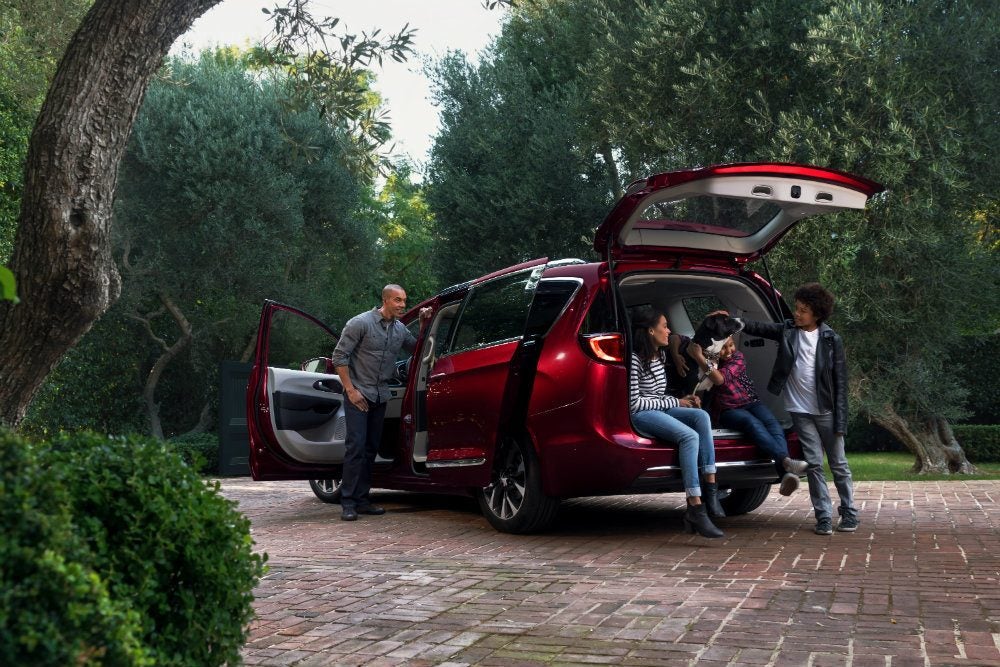 The all-new 2017 Chrysler Pacifica Touring is comfortable, competent, and quiet on the road. It will offer families lots of cargo and people carrying options. The third row won’t leave passengers feeling cramped either. This minivan has sleek styling, has sliding doors on both sides for easy entry, is packed with the latest technology, and is loaded with family-friendly enhancements.

It looks like Chrysler is the back in the thick of the minivan race.