The second-most popular sedan in America, that gets close to 50 mpg, is back after a one year hiatus. The Honda Accord Hybrid is back for round two and makes a strong argument in the hybrid sedan market.

It’s even better than before. It’s roomy, has impressive performance, and comes well-equipped with various features and safety tech.

This week we drove the 2017 Honda Accord Hybrid with the EX-L trim package.

The Honda Accord remains relatively unchanged for 2017. The big news is, after a year’s absence, the Accord Hybrid makes a return. The 2017 Accord Hybrid gets new features that weren’t available on the 2015 model. Notable improvements include more power, improved fuel economy, and a new suite of driver safety aids that come standard on the sedan.

Honda Sensing, a driver assist safety suite, also comes standard. It includes adaptive cruise control, automatic emergency braking, forward collision warning, and a lane-departure warning. It also includes Honda’s LaneWatch, which helps the driver when changing lanes. We have included a more detailed instructional video at the end of our review on how it works.

Stepping inside the 2017 Honda Accord Hybrid reveals a contemporary design that is appealing to the eye and touch. Coupled with its expansive windows, the Accord feels airy and modern compared to other popular midsize sedans. Materials are upscale and there’s plenty of soft-touch surfaces throughout the cabin. It’s efficiently laid out with easy to reach controls on the sleek touchscreen. Other than the annoying radio volume control that’s hard to adjust while driving, we liked the design.

Passengers will feel comfortable in the supple leather seats and there’s enough legroom for taller adults in the front and back. We took a long road trip up into the high country of Colorado and we didn’t hear one complaint that there wasn’t enough room from our passengers. Before we cranked up the premium 7-speaker audio and listened to the XM Radio, the cabin was quiet, keeping wind noise and the world outside at bay.

If you need to carry cargo, the EX-L Hybrid features a 60/40-split back seat that can be folded for hauling bigger items. The 1.3-kWh lithium-ion battery pack in the trunk is smaller for 2017, raising trunk volume to 13.5 cubic feet with a flat cargo floor.

The Accord Hybrid is powered by a 2-liter four-cylinder engine coupled with an electric motor that powers the sedan. Another electric motor operates as a generator to keep the battery pack charged.

A power-meter graphic on the dash is helpful for gauging how much fuel you are using. The Accord Hybrid has an EPA fuel mileage rating of 49/47 city/highway, and 48 combined mpg.

We achieved 43.1 mpg for the week, and we pushed the sedan hard in a high altitude test. 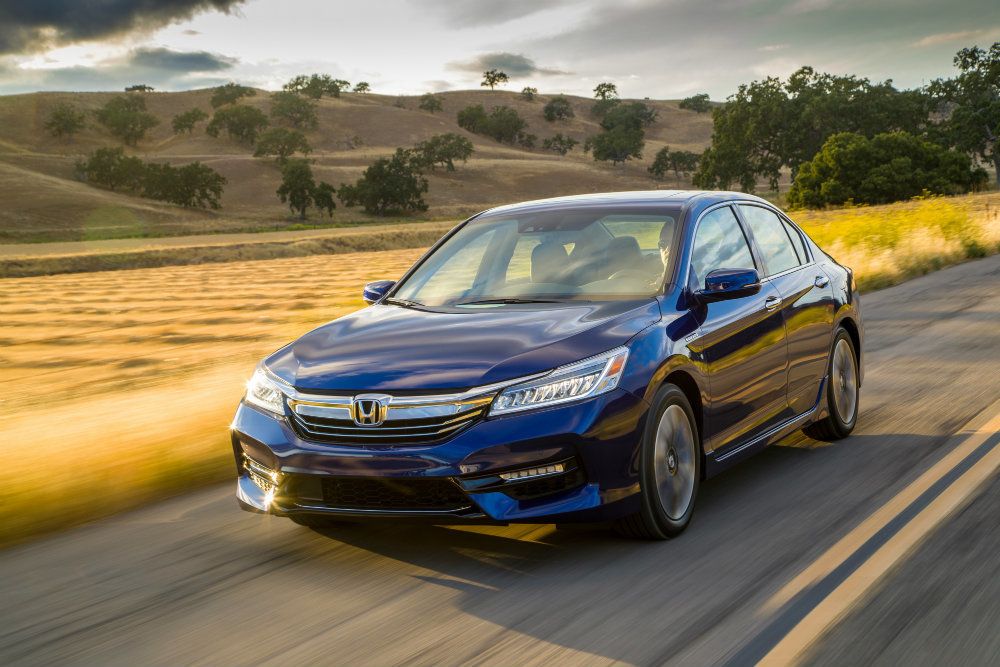 We took the Accord Hybrid into the mountains west of Colorado and had an opportunity to push the new sedan at altitude to see how it would perform. The new hybrid had impressive power as we stayed in the fast lane all the way up I-70 to the Eisenhower Tunnel. We topped out at 11,158 feet on the west side and the hybrid never lacked for power.

Our only complaint with the driving dynamics is the automatic transmission. It winds up tight and has the typical howl that all Continuously Variable Transmissions have. But with the gas engine and electric motor working in concert, the 2017 Honda Accord Hybrid accelerates briskly. We mashed the pedal going up the steep Georgetown hill and passed slower vehicles with ease.

We were impressed with the fuel economy in spite of our aggressive driving this week.

If you are looking for a contemporary sedan that gets excellent fuel mileage, the 2017 Honda Accord Hybrid is a good choice. The cabin is upscale, spacious, and comfortable in every way. Overall, the hybrid handles like a typical sedan and is a pretty enjoyable car to push around the tight turns. It feels stable at high speeds, and secure and responsive in most driving situations.