It’s football season! This Sunday, I will be glued to the tube as my Detroit Lions open the season against the Indianapolis Colts. I have some Packers and Vikings fans in my life, so the next few months could prove rough for me.

I might rely on Ford Motor Company to brighten my Sunday afternoons with the Built Ford Tough Tailgate Tour.

Ford and the National Football League recently announced a three-year partnership, naming the F-Series as the Official Truck of the NFL. To celebrate, the Built Ford Tough Tailgate Tour provides football fans in select cities a unique game day experience. Ford launched the partnership in New York, where fans can order a Built Ford Tough Tailgate Truck through Uber. The special trucks arrive with food, tickets, and merchandise for the ultimate tailgating experience. 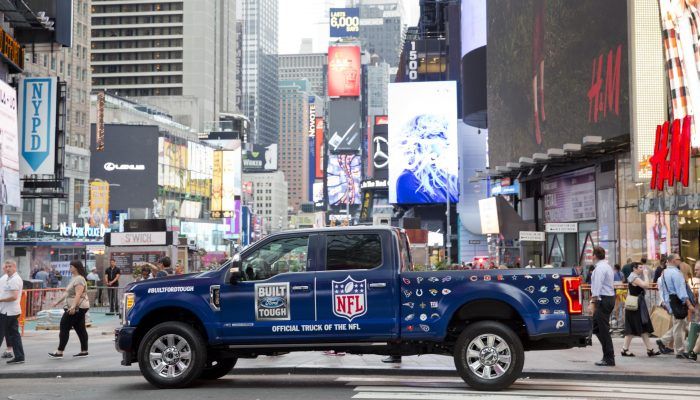 The Toughest Ticket sweepstakes is also underway. Fans have a chance to win a pair of tickets to Super Bowl LI, plus an all-new 2017 Ford F-Series Super Duty. The Super Duty is decked out according to the colors and logos of their favorite team.

“Both brands – each a leader in its category and known for toughness, capability, excellence and innovation – are coming together to give fans exclusive access to events and games, and to highlight players in a new way,” he said.

On This Page
Official Truck
Tough Trucks, Tough Tickets
On The Offensive