One of Shelby’s press release photos that read “The first consignment of 1966 Shelby GT350s on their way to a franchised dealer.” As opposed to a guy on a street corner I assume? Photo: Road & Track/Hearst Magazines.

There is something about Shelby Mustangs. Once you fall in love with them, they never let you go. I still recall the one sitting next to my desk at Sioux Falls Ford, a 2009 Ford Shelby GT500. I was new to the business at the time, so sitting next to such a car was really something.

I wanted to sell it so badly but never even got close. I indeed talked to customers about that Shelby Mustang; many wandered up from the Quicklane waiting area. While they were having their oil changed and tires rotated, they marveled right along with me.

To them, it was also a dream, so we saw common ground in fantasy and imagination rather than paperwork and financing.

Carroll Shelby built Mustangs from 1965 to 1970, when the muscle car years were ripe. After the successful launch of the original Mustang, other automakers jumped on board, producing their own muscle variants. Although muscle ruled the world, Shelby Mustang production actually ceased.

The rarity of the cars increased the value substantially. By the end of the 1970s, the Shelby Mustang attained “classic” status, well ahead of its counterparts. The value rose the more distance it put between present day and those iconic muscle car years. In 2006, for example, a 1967 Shelby Mustang GT500 garnered $451,000 at auction! Depending on where you live, that might be worth more than a house. Interesting enough, in 2006, Shelby Mustang production resumed after 36 years.

Our featured book this weekend is officially licensed by Carroll Shelby Licensing, Inc. Furthermore, it was created and crafted alongside the Carroll Hall Shelby Trust. Shelby Mustang Fifty Years comes alive with rare, historic photography, wonderfully complemented by modern images. From Shelby’s first collaborations with Ford to the modern muscle machines they are today, Shelby Mustang Fifty Years is an essential book for any Mustang enthusiast.

Colin Comer, respected authority on collector cars, is Editor-at-Large for Sports Car Market and American Car Collector. He is a Contributing Editor for Road & Track and regularly appears in the New York Times, Business Week, USA Today, and many other respected publications. When not writing about cars, he is an avid vintage racer and pilot.

In addition to Shelby Mustang Fifty Years, Comer also wrote Shelby Cobra: The Snake That Conquered the World, which we featured in June for this series. Both are available through Amazon and Motorbooks. 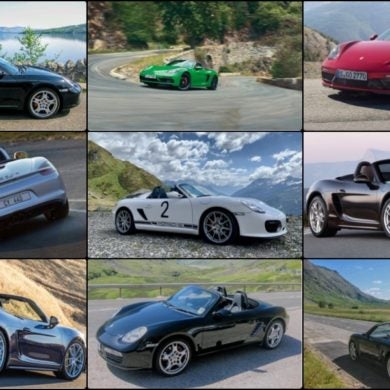