When you think of hybrid vehicles what is the first one that comes to mind? Yep, it’s the Toyota Prius, the top-selling hybrid in America. But the new Prius, which we just recently reviewed, isn’t for everyone. Enter the 2017 Ford Fusion Hybrid. If you want a more conventional sedan with abundant cabin space, but still need the fuel-stingy hybrid, the new Fusion could be for you.

The 2017 Ford Fusion Hybrid gets a number of updates, including a restyled front end and headlights. The previous MyFord Touch system is replaced with the Sync 3 infotainment interface, which is easier to use. A new rotary transmission selector and push-button engine start are now standard on all Fusion Hybrids.

The cabin of the new Ford Fusion Hybrid Titanium shouts sporty and modern. It features a back interior with contrasting stitching on the seats and dash. The sport seats are extra comfortable and there’s lots of soft-touch materials throughout. The new dial transmission sector fits nicely on the center console and keeps things uncluttered and clean looking.

The driver has good visibility out the front and sides, but rear visibility is impeded with the raked roofline and sloping rear window. It’s the price we pay for stylish exterior lines, although the standard rearview camera was helpful this week.

The backseat passengers will be as comfortable as in the front. The seats are supportive and mirror the same sporty contours as the front seats. There’s lots of leg, head, shoulder, and hip room in the back too. We took some taller passenger to lunch and the comments were all favorable.

The Fusion Hybrid’s trunk gets shortchanged because of the battery pack underneath. Still, the rear seats fold 60/40 and lay flat if you need the cargo space. Overall, the interior features high-quality materials and is a place you won’t mind spending time.

The 2017 Ford Fusion Hybrid is powered by a 2.0-liter four-cylinder gasoline engine, mated to an electric motor that’s powered by a lithium-ion battery pack. They generate 188 horsepower combined and send power to the front wheels.

EPA figures were not available at the time of this writing. The 2016 Ford Fusion Hybrid gets 44/41 city/highway and 42 combined mpg.

Like the cabin, the driving dynamics are much more sporty than the competition. If you prefer a sportier feel, the Fusion Hybrid will make you smile. On a scale of 1-10, this sedan rates a 6.5 on the fun-to-drive meter – not many hybrids can even come close to that.

We chucked the Ford sedan around some tight mountain curves, and the hybrid responded with sharp steering and very little body lean. Acceleration is brisk because of the electric motor’s extra torque, and we didn’t have a problem gaining speed going up the mountain roads outside of Denver. The CVT automatic is better than some and it kept the car moving smoothly as we pushed it hard.

On the highway, the Hybrid is quiet and we only heard the engine when we pushed it hard in the mountains. The ride isn’t as smooth as the Sonata Hybrid or Camry Hybrid models, but it’s certainly sportier and a lot more fun to drive. If you are a driving enthusiast that loves good fuel economy, the Ford Fusion Hybrid is the car to have.

The 2017 Ford Fusion Hybrid gets good marks for a roomy, comfortable interior, sporty driving dynamics, and of course, fuel mileage. It features new updated styling outside with a lot of new high-tech features inside. With its quiet ride, passengers will be comfortable on long trips be it for business or pleasure. 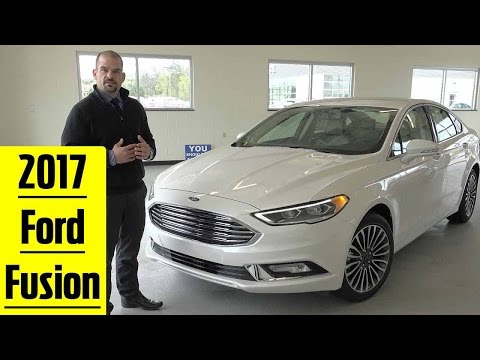 *Fusion Sport shown, no Hybrid Titanium media photos available as of this writing.