Letter From The UK: Dog Days of the Subaru Summer

By the time you read this I will be driving a Subaru BRZ. Essentially, I will be saying goodbye to this wonderful little sports car as we await the replacement model later this year. Not quick but full of purpose, it is just the car to be driven lazily through the heat haze of summer days.

Here, on our small island adrift in an azure sea, we wait patiently for the jet stream to shift northwards and unleash our overdue Summer. Right now it is dragging in wet weather from the Atlantic, bejeweling our lush green countryside with occasionally sun-caught raindrops.

When we look across at your massive continent with its big skies, wild, open spaces, and roads that stretch straight as an arrow to the vanishing point, we feel envious. In the United Kingdom we are limited for space and our roads are regulated beyond all human endurance by an interfering bureaucracy.

Yet there is still hope. We have driving roads that can bring joy to the most jaded driver. Pictured is part of the North Coast 500 in scenic Scotland. Our northernmost country has hundreds of miles of great driving and, although the cops are keen and speed limits abound, there is still room to crack on. 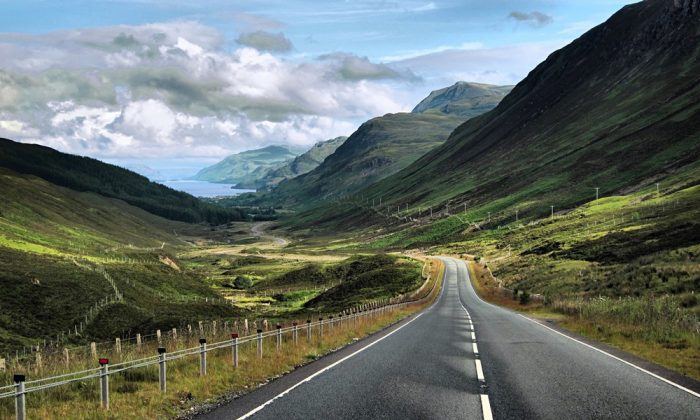 Therefore this Summer I shall be spending the dog days driving Subaru cars. The BRZ for its purity of purpose and to recall how it feels when I drive the new one. The upgraded Forester for its off-road potential and the WRX STi with its ridiculous wing. There have been no upgrades to the latter, it is just that I love this car with its determinedly old-school driving manners, its clonking mechanical diff, and the symmetrical 4WD handling prowess.

There is another reason. Did you know it is also an anniversary year for Subaru? Fuji Heavy Industries this year celebrates fifty years of its horizontally-opposed ‘Boxer’ engine, so called due to the engine’s pistons resembling the punch-counter, punch motion of a boxer’s fists. The Boxer engine was introduced on the Subaru 1000 compact passenger car on 14 May 1966. Since then, Subaru has sought to maximize the advantages of its Boxer engine and has continuously enhanced them to power its vehicles to this day.

With the horizontally-opposed design of Subaru’s Boxer engine, the opposing pistons work to cancel out the inertia force of each other, resulting in less vibration and superb rotational balance to provide smooth acceleration right up to the highest engine speeds. Its compact form also allows it to be fitted lower in the engine bay than a conventional four-in-line engine, lowering the center of gravity.

This is the key to the BRZ. It might not have the power but it has the finesse. On Britain’s country roads it delivers an unequaled drive by pushing the Prius tires to the limits of adhesion.

I believe Subaru has a big following in the United States. For some reason that escapes me, this is not the case over here. Subaru is very much a niche brand, historically popular only with farming types who drive aged models into the ground often as a taxi service for single, sickly sheep. Their toughness and build quality are legendary among those of us who know.

Sadly, the bulk of the buying public still cling to the modern, overblown crossover sector. These cars appear to offer the promise of off-road ability but can never deliver the goods. The UK car customers seem sold on this automotive lifestyle ideal. They seem to believe because a car is ‘connected’ it is somehow better, but my concern is this: does this future lead down a road where cars are no longer cars at all?

True, you can’t halt progress; it’s just that I wish car buyers would be a little more discerning about their choices. They don’t know what they are missing. This is why I’m mostly driving Subaru’s this summer. There is one slight blot on the landscape though and that is Continuously Variable Transmissions. It is very likely the Forester that turns up at my door will have one of these abominations.

CVT gearboxes, in my view, suck the life out of cars. Sure, there is nothing wrong with economizing on fuel but I object as a consequence to economizing on fun. The sound of a CVT holding high revs takes some getting used to.

Actually, it just annoying no matter what.

Credit where it is due though: Subaru has taken steps to ‘step’ the progress of the transmission. It will still automatically shift to the most optimal gear to suit any driving style and road condition, but now a ‘stepped’ variable control remains in tune with changes in engine speed. It’s an improvement you can just about live with.

So that is my summer sorted. Seeking out the wild limits of our bosky, sometimes sun-kissed countryside with four-wheel drive and tackling the giddy limits of our remaining great driving roads with some Boxer power.

Drive safe and enjoy those dog days of Summer.